The store that got its start out of a pushcart on East Broadway in 1926 will next week move into an 11,000-square-foot location on Park Avenue South. 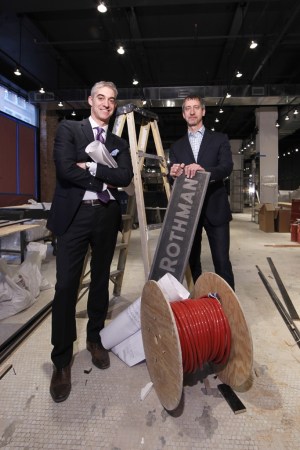 Grandpa Harry would feel right at home at the new Rothmans.

From the three-level hanging suit display to the original tile floor in the 110-year-old space, the men’s wear retailer is embracing its heritage as a New York City institution.

The store that got its start out of a pushcart on East Broadway in 1926 will next week move into an 11,000-square-foot, two-level location one block north of its current home at 17th Street and Park Avenue South. The move out its 7,000-square-foot home after 25 years is expected to add 20 percent to the company’s volume which is estimated at between $7 million and $10 million. Rothmans also operates a unit in suburban Scarsdale, N.Y.

“In New York, everybody does heritage, but we actually have heritage,” said Ken Giddon, grandson of the founder, Harry Rothman, and co-owner of the business with his brother Jim.

Harry Rothman was born in New York City in 1902 and grew up in a tenement on the Lower East Side. He quit school at age 11 to help support his widowed mother and six siblings, and at 24 started selling men’s clothing at a discount out of his pushcart. The concept took off and he eventually opened a store at 18th Street and Fifth Avenue.

But tailored clothing remains the backbone of the business, representing 65 percent of sales.

“We’re still a clothing store,” Ken Giddon said. “And in the new store, we’re sticking with it and giving it a full ride. We’re going to have half a city block of tailored clothing.”

He said the design of the new store is reminiscent of the old Harry Rothman’s and will incorporate triple racks of clothing on metal brackets hanging from the exposed brick walls.

There will be a separate formalwear area downstairs and an increased commitment to footwear.

The store hired Lalire March Architects, which has worked on J. Crew and Barneys New York, to design the retail space.

“We had to figure out how to work with the space, not around it,” said Christopher March, the architect. “Rothmans is a company with true heritage so we created a space with New York heritage as well. We exposed the shell and did a modern intervention.”

In an oxymoronic shift, the new Rothmans will also offer a “permanent pop-up shop.”

“We believe retailing is all about change,” Ken Giddon said. The shop will feature “whatever we believe is great for our customer,” his brother added. “Anything from roller skates to cars to fishing equipment.”

The first installation will be an exclusive capsule collection from the designers of Duckie Brown, called Mr. Brown by Duckie Brown. The tailored clothing and furnishings pieces will be significantly lower priced than the designers’ flagship line and Ken Giddon said the plan is to eventually wholesale the collection, maybe as early as next year.

“We met at the Capsule trade show and hit it off,” he said. “And we decided to do a line together. We love their approach to fashion — it’s wearable but fun.”

So by working with the store’s existing vendors, Rothmans was able to find suppliers who could produce the collection at a lower price. Suits, for instance, will retail for $795, sport coats for $595, ties for $75 and sport shirts for $175. “They’re cool clothes with whimsy.”

“We love Ken, we think he’s fab,” said Daniel Silver, co-designer with Steven Cox of Duckie Brown, adding that the collection will allow the duo to “grab a larger audience because its prices are more reasonable. Yet the line still has the spirit of Duckie.” They also design a line of shoes for Florsheim that serves the same purpose. “We don’t like to call it a diffusion line, we like to call it a diversion line,” he said. Silver also said that with Rothmans as its partner, the Mr. Brown collection has an immediate retail distribution strategy that “didn’t require a large investment on our part,” and he’s optimistic about the success of the collection.

The Giddon brothers have similarly high expectations for their store, which is the largest independently owned multibrand men’s store to open in New York City in years. And although there were still some time left on their lease on 17th Street, they opted to make the grand move.

“After 25 years, we had a decision to make,” Ken Giddon said. “We had five years left on the lease and could wait it out, or be proactive.” Rothmans was paying rent that was significantly below market rates and the owners knew their landlord would pay for them to free up the prime spot in the bustling Union Square neighborhood. “We knew there was no chance we could stay there and renew our lease because when we came here, Union Square was off the beaten track. Now it’s on the beaten track.”

What sealed the deal, he said, was when the landlord, ABS Partners, bought the retail co-op at 222 Park Avenue South, one block north, last year. “All of a sudden, the deal made sense,” Ken Giddon said. “We got money to leave and we put it into the new store.”

Although the rent at the new space is about 20 percent higher, the Giddons are confident they’ll bring in the volume to make the investment worthwhile.

“We think New York City needs a multibrand men’s store, and we want to be the biggest one in the city,” Ken Giddon said. “Where does a store like Rothmans fit in New York? All the other stores that did what we do are gone. That means either we’re really good at it or we’re like the last guy in the hat business. We’re hoping we’re really good at it.”

The brothers stressed that their formula of providing quality clothing and sportswear at reasonable prices will not change. What will be improved, they promised, is the customer experience. “Our goal is to create and efficient and rewarding shopping experience for men,” Jim Giddon said.

His brother added: “We’re an independent store with great clothing that we sell without a lot of pretense in a relaxed atmosphere. We just want to execute better in terms of customer service, the look of the store and the merchandising.”

One difference will be that clothing is merchandised front and center along with complementary items in a bid to increase multiitem sales. In the old store, suits were downstairs in a windowless room.

But with the exception of the new Mr. Brown collaboration, much of the mix will remain the same.

“We’ve done our homework, we’ve shopped the market for the best lines,” said Ken Giddon, who is a fixture at every men’s wear trade show. “We have sportswear lines two to three years before the department stores discover them. We’re probably not the most fashion-forward store in New York, but we don’t need to be.”

Ken Giddon attributed the store’s success over the years to the fact that its owners are “business guys in fashion, not fashion guys in business. We know our biggest asset is our customer base.”

The store, which is known for its witty advertising campaigns featuring illustrations of men in the metropolis, and its in-house magazine draws a mix of athletes, politicians and “regular guys,” Ken Giddon said. And in its new bigger home, the brothers are hoping more men will stop by for a look.

“We have to go big or go home, that’s our motto,” he said. “We’re paying a big rent and taking a big risk, but we believe you have to have a certain amount of scale to make people travel to you.”