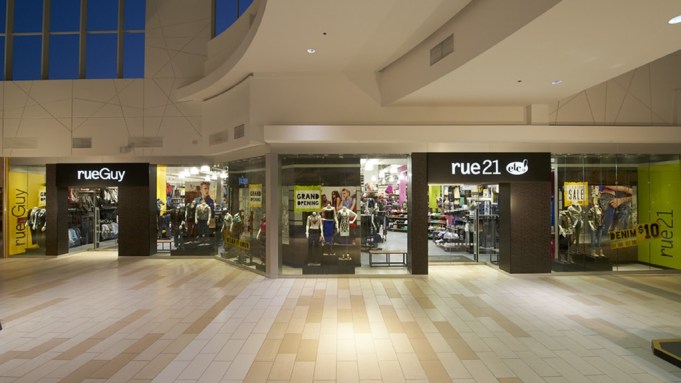 Rue21 is turning its attention to guys.

The Warrendale, Pa.-based teen retailer, which was acquired by Apax Partners in May for $1.1 billion, opened three RueGuy departments last week and plans to have 20 in place by yearend. The stores that opened Friday with RueGuy departments were located in Bay Shore, N.Y.; Harlingen, Tex., and New Boston, Ohio, and are about 6,000 square feet each. They’re the first of seven RueGuy departments slated to open around the country in August alone.

Bob Fisch, Rue21’s president and chief executive officer, said: “We look forward to growing our already successful guys’ business with this new store format that will allow us to deliver an expanded assortment of merchandise and accessories to our male customers. While we originally went into the design process focused on building the guys’ business, we are confident that the new store layout, colors and fixtures will improve the shopping experience for all of our customers who are seeking the latest trends at competitive starting price points. We see this as just the beginning of building a new store format for the future.”

Since its founding in 1976, Rue21 has built a 959-unit chain which operates in 47 states and has sales of just less than $1 billion. It went public four years ago and has nearly doubled in size in that time. Fisch said the plan is to double in size again to 1,700 stores and $2 billion in sales within the next five to six years.

“Our strongest business comes from markets with under 50,000 people,” he said. “The further we go out, the more business we do, the less rent we pay and the more profitable we are.”

Fisch, who cut his retail teeth in the legendary Abraham & Straus retail program and also worked for Jordan Marsh and Casual Corner before joining Rue21 12 years ago, said he expects the men’s initiative to mirror that of women’s accessories. “Seven years ago, we made a decision to expand accessories by 1,000 square feet in our stores and go after footwear, jewelry and fragrances,” he said. The company tested the expanded assortment, which is called Etc., and the response was so strong that it is now in more than 800 stores. “We see the same thing happening with RueGuy,” he said.

He said men’s wear currently represents 18 percent of overall sales, but that number is expected to increase 4 to 5 percent as RueGuy rolls out. “We think this will be great for the company and for guys,” he said.

Fisch said the 20 stores that will feature larger RueGuy assortments will be a mix of new units and expanded or remodeled stores. In the company’s older, 5,000-square-foot stores, men’s will be enlarged by 40 to 50 percent. “We’re separating the businesses, but they’re not separate stores,” Fisch explained. “We believe in having one big box, but there is a big opening between the two areas, like Zara and H&M.”

In the larger 6,000-square-foot stores, such as the one in Bay Shore, RueGuy has its own entrance.

In both cases, the men’s area is being designed with open ceilings, a gold color scheme and design elements to appeal to a male customer while complementing the look and feel of the women’s store, which uses a green color scheme. The expanded men’s assortment includes more graphic T-shirts, novelty tops and denim. “We’re really giving it more dominance,” he said.

He said the company will also branch out into “dressy separates and ties,” and will enhance its Carbon Elements accessories offerings for men. “Right now it’s just jewelry and footwear, but we’re planning major growth in footwear and we’ll add some electronic items such as cell phone covers because guys are asking for it,” Fisch said.

Since opening last week, the new RueGuy departments have “far exceeded plan,” Fisch said, acknowledging that the test is new and the results early. “But we’ll be opening three more stores this week and one next week so we have seven for back-to-school. Then there will be 13 more in November. We’re not opening any in September or October, but that’s not the right timing for teens. And with 20, this will be adequate for testing.”

Rue21 caters to 13- to 18-year-olds who “aspire to be 21, or those over 30 who aspire to be 21,” Fisch said. Although viewed primarily as a teen chain, he said nearly 30 percent of the business is to people other than teens who “like cool clothes.”

The chain carries exclusively private-label merchandise and is “extremely fast in our speed to market,” said Fisch, noting that merchandise can be delivered as quickly as one week to three months and is purchased from domestic importers. He characterized over 50 percent of the mix as “fashion” merchandise, “not key items.” He added: “We’re the Zara of underserved markets for teens.”

He said that in many of the towns in which Rue21 operates, teens wishing to go shopping often have to “drive 50 or 60 miles to a mall. So we provide our customers with fashion at incredible value. And we think RueGuy will take us to another level.”

This fall, Rue21 will launch an e-commerce site, which he expects to be especially appealing to guys. “They’re more into instant gratification,” he said.

Fisch said the plan is to continue to add around 125 stores a year as it powers toward its goal of 1,700 units in the U.S. Then the company can turn its attention to Canada, Puerto Rico and Mexico, he said.

Rue21 went public in November 2009. Before that, the retailer’s parent, Pennsylvania Fashions Inc., filed for bankruptcy protection in February 2002. The company emerged in May 2003 under the name Rue21. Its majority shareholder at the time was buyout firm Saunders Karp & Megrue, which merged with private equity firm Apax Partners Worldwide in February 2005.

Fisch attributed the results to a “challenging environment,” but pointed to the 41 stores that opened in the quarter as well as the gross margin expansion of 120 basis points, and an increase in gross profit. “We also feel positive about the continued progress we made this past quarter on our long-term goals, which include opening profitable new stores in underserved markets and moving up the launch of our e-commerce site to the fourth quarter.”

He concluded: “We’ve been in business a long time, but we still think it’s an immature company. And this is the right time to go private. We can work on putting our initiatives in place and not have to worry about analysts who think long term is two quarters.”