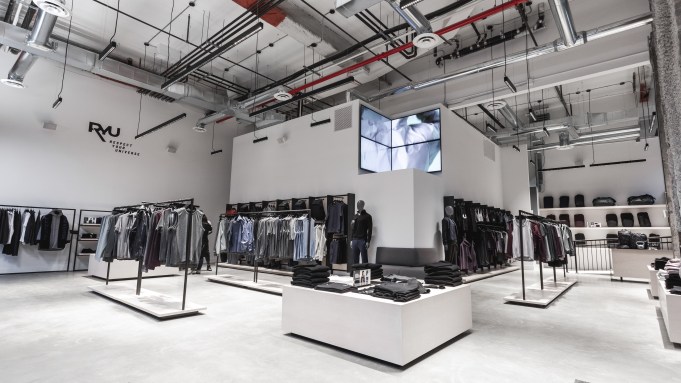 RYU, which operates six stores in Canada, has opened its first location on the East Coast, a 2,800-square-foot flagship at 76 North 4th Street in the Williamsburg section of Brooklyn.

The urban athleticwear brand exudes a tough beauty inspired by its rugged natural surroundings in Vancouver and belief that beauty isn’t a trophy that’s bestowed on someone, but rather the reward that’s earned for an accomplishment. The city has had an inspiring effect on other ath-leisure brands, including Lululemon, Kit & Ace, which shuttered its U.S. stores but continues to operate nine units in Canada, and Reigning Champ, with two flagships each in Vancouver and Toronto, and one in Los Angeles.

A focus on technical performance attributes and tailored silhouettes that can be worn beyond the gym, along with pillars such as community, team spirit and compassion, can be found embedded in RYU’s acronym, which stands for Respect Your Universe.

“The U.S. is a very important market for us,” said Marcello Leone, chief executive officer, president and chairman of RYU. “We see continued growth in the U.S. through the end of 2022. About 80 percent of our expansion will happen in the U.S. in the next two to three years.”

RYU recently unveiled its sixth store in Canada and second unit at Sherway Gardens. A unit will next open at Fashion Island in Newport Beach, Calif., and the brand plans to open about five stores next year. The first RYU store in the U.S. bowed last year on Abbot Kinney Boulevard in Venice, Calif.

RYU is attracted to dense urban locations populated by well-educated, fitness-oriented consumers. Leone, who visited the New York Stock Exchange to reveal the opening of the Brooklyn store, said, “Williamsburg is important to us. It’s a great community and we wanted to build out [the community] aspect of the brand.”

Initiatives such as #RYUOneMoreRep galvanized the brands’ followers, who were challenged to pick up kettleballs and count the number of times they could swing them. More than 508,000 reps later, RYU made donations to two Canadian mental health organizations.

Respect, the first word in RYU, is a word Leone speaks about; the ceo has said he was bullied as a boy, “but ended up on a mission to change the world.”

RYU has taken a thoughtful, deliberate approach to expansion. The third quarter ended Sept. 30 marked the 11th consecutive quarter of growth, although the company’s shares have fallen sharply over the last 12 months.

“We’re a young company and a young brand. Our products don’t go on sale. We’re entering the end of our third year,” Leone said, noting that RYU in its first two years launched 27 different stockkeeping units. “You’re now going to start to see the expansion of outerwear and lifestyle products and the introduction of hybrid swim for women and men.”

In addition, RYU is introducing lingerie and underwear for women and men, respectively. Training shoes will launch in the first quarter of 2020, and a bigger selection of handbags and accessories such as wallets is in the works.

New products include a long women’s Sideline parka, $300, made with water-resistant fabric and sealed seams, coated with C6 polyurethane durable water-resistant coating to keep out rain. Insulation without bulk, internal shoulder straps and hand inseam zippered pockets behind a bonded pocket welt are some of the special features. The parka also has standard RYU features such as a tailored cut, signature lay-flat hood and angled seams and diamond underarm gussets to enhance range of motion.

Leone, who has been involved since mid-2011 as an investor in RYU, was named chairman and ceo in 2014. Prior to that much of his background was in luxury and designer ready-to-wear at Leone, the 30,000-square-foot specialty store in Vancouver founded and operated by his parents.

“We were the first family to introduce Italian fashion to Canada,” he said, noting that the retailer opened the first in-store boutiques for Gianni Versace and Dolce & Gabbana in Western Canada. “We introduced Prada men’s and women’s rtw. I have a love for the rtw business where I spent my career, yet I wanted to build out the ath-leisure revolution.”

Leone said that during his days at Leone, the only two brands that never went on sale were Louis Vuitton and Hermès. He realizes that RYU has to stand out from the ath-leisure crowd the way those two luxury brands did.

“You need a point of difference from the other brands that exist,” he said. “RYU is technical-focused performance pieces, but you can wear them outside of the gym.”