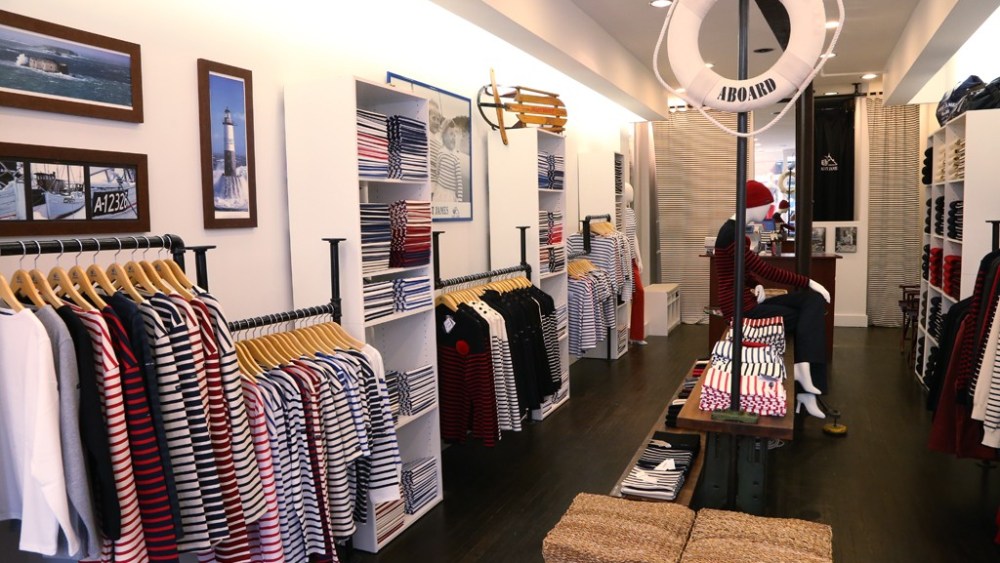 Saint James has dropped anchor in the West Village.

The French nautical brand has relocated its New York City store from 79th Street and Madison Avenue to 319 Bleecker Street, as it seeks to be closer to its customer base.

“A lot of our customers come from downtown,” said Guillaume Jamet, general manager for the U.S. division. “They’re artists and young people, so it made sense to move closer to where they live and shop.” The Madison Avenue unit opened seven years ago and was the company’s first store outside of France, but the brand has evolved over the past few years and it was time for a new look.

“This is a great occasion to tell our story and offer the Saint James experience,” he said.

The 600-square-foot store, which opened Wednesday, carries both men’s and women’s apparel and accessories, and it includes several limited-edition products, such as special colors and cuts of Saint James classics.

It is designed to “feel like you’re on the French Riviera and it’s been there for centuries — but modern as well,” Jamet said. Channeling its nautical roots, the store features shelves made from reclaimed driftwood, display boxes made from jute, and historical photos of the brand that was founded over 120 years ago. “We really want people to feel the history of the company,” he said.

Saint James is known for producing the striped Breton shirt that has been part of the French naval uniform since 1848. The 21 stripes on the combed cotton jersey correspond to a naval victory of Napoleon’s French fleet against the British, according to company lore. Its fisherman sweater has been worn by anglers since the 19th century and the brand still outfits the French Army and Navy with their official uniform sweaters. Its factory is still located in the village of Saint-James, population 3,000, about 13 miles from Mont Saint-Michel.

Jamet said there are no plans to add more stores in the States at this point. “We’re going to have just this one for now,” he said. “We’re crossing our fingers, but we think it’ll be a great store. And we want to tell our story in other places, so eventually we will have a few more, but not right away.”

In addition to the new store, Saint James has created its first capsule collection for Barneys New York. The collection consists of eight pieces based on Saint James’ history as a manufacturer of hefty knitwear. It includes classic American styles such as varsity jackets, shawl collar cardigans, bomber jackets, knit pants, crewneck sweatshirts and Henley shirts with a French flair. All of the pieces were manufactured in France and retail from $115 for the Henley to $625 for the cardigan. The capsule will be carried in Barneys’ stores in New York, Beverly Hills, San Francisco and online.

The company also commissioned a calendar that was given out at an event Wednesday night celebrating the store and the launch of the capsule collection. The calendar was shot by Bill Gentle of Backyard Bill and features New York personalities, including John and Mark Barboni, owners of Hudson Clearwater restaurant; architect Kelechi Odu; author Glenn O’Brien, and his son and actor Alex Burns.

The Saint James collection is carried in over 220 retailers in the U.S. Worldwide, it operates over 50 stores, including 10 in Japan. The line is also available in Europe, Korea and China.