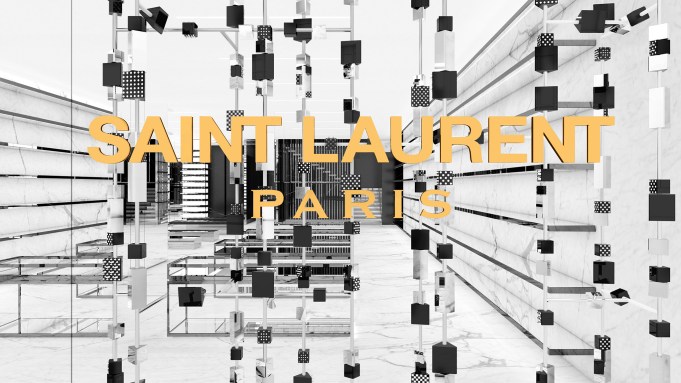 Saint Laurent’s reimagined flagship at 3 East 57th Street in Manhattan opens today, the architecture and design concept that creative director Hedi Slimane has been deploying around the world, fully realized. The renovated store comes with an enlarged footprint of 14,071 square feet, moving ahead of the Los Angeles unit as the company’s largest in the world.

The renovation, which took 10 months, extended the store to three levels from two. The extensive structural changes include a new elevator and staircase framed by horizontal pieces of nickel-plated brass similar to the one at the Avenue Montaigne flagship in Paris.

The entire range of Saint Laurent men’s and women’s collections, including ready-to-wear and accessories for both genders is housed in the flagship. Pieces from the permanent collection across all categories form the basis of the wardrobe and include the Nano Sac De Jour, $2,250; Saint Laurent Smoking, $3,550, and motorcycle jacket in black lambskin, $4,990.

The permanent items are interspersed between the fall 2015 collection and special products whose U.S. distribution is limited to the Greene Street store in SoHo and the Los Angeles flagship. The Surf Sound collection’s limited-edition hand-embroidered Baby Teddy Jacket, from the work, “Pet Name,” by Los Angeles artist Lucia Ribisi, $7,765, is due to arrive in November.

“This investment further strengthens our positioning in the U.S., which is a very important market for Saint Laurent, with a 22 percent share and posting a comparable currency retail growth of 16 percent in the third quarter of 2015, notwithstanding the general challenging economic situation,” said Francesca Bellettini, chief executive officer of Saint Laurent. “In the USA, we directly operate 21 stores and have a balanced wholesale distribution in the major department stores. Together with our store on Greene Street, which opened in 2013, we are now able to fully represent the brand image both uptown and downtown, offering a unique and consistent experience to our clientele in New York.”

When the 57th Street flagship opened in 2003 as Saint Laurent Rive Gauche, Tom Ford was creative director of Yves Saint Laurent, as the brand was then called. Ford juxtaposed sleek interiors with white lacquer walls and smoky hand-hewn wood wardrobes and pony-skin daybeds.

Slimane has described the style of his flagship concept as 21st-century Art Deco.

If the hand of the craftsman is here, it’s intentionally not obvious to the naked eye. “While craftsmanship is clearly evident throughout the store, it is superbly detailed in its execution, yet subtle in its expression,” Slimane said in his store concept manifesto.

Nothing is superfluous in this strict and rigorous rendition where “decoration is derived from the materials themselves. The natural veining in the marble allows the architecture to retain a purity of form and a geometric rigor. The precise mathematical repetition of the clean vertical and horizontal lines of display cases, shelves and strip lighting adds a dramatic visual rhythm to the space.”

The project involved a lot of heavy lifting — literally — with large slabs of marble figuring greatly in the store design. On each level, one wall the entire length of the floor is marble, as are the floors. Vintage pieces by Adnet, René Herbst, Breuer, Prouvé, André Sornay and other modernists furnish the space.

A window installation created for the opening is as precise and deliberate as other aspects of the store. The mechanical structure, inspired by the XVII collection, consists of 11 pillars and 18 cross girders made from mirror-polished steel, upon which 215 differently shaped multifaceted modules are mounted. One-hundred of the modules are covered with white mirrors and 115 with black mirrors, with some of the black-mirrored modules studded for a total of 3,002 flush studs. A hidden electrical system powers a motor that sets the structure in motion. After four months of research, a team of 15 people built the structure.

Dressing rooms hidden behind mirrored panels have the visual equivalent of surround sound, giving the customers a 360-degree view.

Slimane’s tenure at Saint Laurent has grabbed headlines from the start when he joined the house in 2012. Despite outrage from YSL loyalists and mixed reviews of his collections, parent company Kering has said that Saint Laurent’s revenue has doubled since Slimane joined.