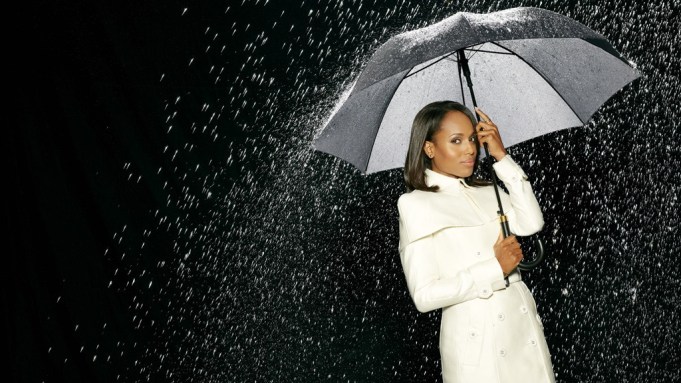 NEW YORK — Saks Fifth Avenue has linked with ABC’s “Scandal” to try to win style points with some of the show’s estimated 10 million weekly viewers.

To celebrate the political drama’s Oct. 3 premiere, the show’s star Kerry Washington, creator Shonda Rhimes and costume designer Lyn Paolo will meet-and-greet shoppers at the flagship on Oct. 2. Out on Fifth Avenue, fans will find “Scandal”-inspired window displays curated by the Emmy-nominated actress, who plays Washington insider Olivia Pope, and Paolo. None of Washington’s actual costumes will be on view, but there will be pieces from her character’s favorite designers, such as Giorgio Armani, Donna Karan, Calvin Klein, Michael Kors and Carolina Herrera. There will also be such popular Pope-isms as “It’s handled” printed in the windows. A Mercedes-Benz (similar to the ones used in the show) also will be featured in one of the windows.

All these efforts are part of Saks’ and ABC’s interest in wooing the drama’s 18- to 45-year-old fans. Both parties plan to ramp up attention via their respective social media. “Scandal” has one million fans on Facebook and nearly three million Twitter followers, according to Adam Sanderson, Disney/ABC Television Group’s senior vice president of franchise management. (The show is produced by ABC Studios.)

Special “Scandal”-esque displays will be featured in select Saks stores, and several designer fashions and accessories from Saks will be showcased in upcoming episodes during the upcoming season.

Having worked on the deal with ABC over the past few months, Saks Fifth Avenue’s Chairman and chief executive officer Steve Sadove said, “This partnership allows fans of the show and our customers an opportunity to shop looks that are representative of the characters’ style, many of which have been curated by Lyn and Kerry.”

As part of its plan to make “Scandal” a lifestyle brand, ABC is interested in developing a signature line for working women who relate to the clothes Washington wears on the show, Sanderson said. No formal plans have been set, but such companies as The Jones Group or Ann Taylor would be likely candidates, he said. Should such a sportswear deal — or one for another category — come to pass, ABC executives would consider implementing what Sanderson described as “watch it, buy it” shopping, such as Get This, which allows fans to buy styles from their favorite entertainment.