By David Moin and Sharon Edelson on June 6, 2005
View Slideshow 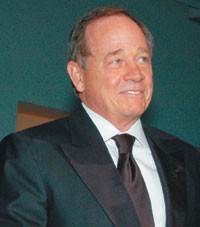 The retailer’s parent, Saks Inc., said Friday that it has launched a “supplemental inquiry” into overcollections of vendor markdown money, even as Saks Fifth Avenue’s chairman and chief executive officer, Fred Wilson, has been personally calling on top vendors, offering apologies and promises that Saks will repay “every penny” it owes.

Additionally, Saks said that results for the first quarter of fiscal 2005 released on May 17 reflected a $1.2 million reduction to net income, based upon a “preliminary determination” that $2 million in vendor allowances was “incorrectly accelerated” into the quarter.

Due to the internal reviews, Saks Inc. will adjust financial statements going back to 1999 and has delayed its annual report and Form 10-K covering 2004. The company expects that everything will be filed by Sept. 1, including its first-quarter report for the period ended April 30.

Sources reiterated Friday that the bridge area was the subject of the earlier probe, and they believe contemporary sportswear could be part of the latest internal probe. Key contemporary vendors at Saks include Theory, Marc by Marc Jacobs, Cynthia Steffe, Diane von Furstenberg, Earl, Seven For All Mankind, Juicy and DKNY.

The sources also said practices in the men’s wear area could be under scrutiny, as well. The store’s remaining four key merchandise zones are cosmetics, designer, accessories and home.

The designer category is not believed to be a problem area, primarily because it’s a smaller-volume category at Saks, relative to bridge and contemporary. Fine jewelry, largely a consignment business, and handbags, which generally sell well and are not as prone to markdowns, are also not believed to be under examination. Two designer executives on Friday said there were never serious problems over markdown allowances at Saks, and that markdown situations always would be worked out.

Sources noted that Saks Inc. started toughening up on chargebacks, viewing the practice more as a profit center, after 1998, when Saks Fifth Avenue was purchased by Proffitt’s, creating Saks Inc. Chargeback fees, generally related to shipping and packing issues determined at warehouses, could be imposed on any vendor that ships the store, whereas issues over markdown allowances appear to be restricted to just a few categories, such as bridge and contemporary sportswear.

The latest probe raises the possibility that more heads could roll, and that Saks’ problems could intensify if more vendors seek recourse in the courts. Earlier this year, it was learned that Onward Kashiyama filed a suit in Manhattan federal court against Saks Inc. and its Saks Fifth Avenue unit, with Onward claiming more than $9 million in deductions and credits not agreed upon. Saks said at the time that it owed $20 million to vendors that would be paid back. Since then, it also came to light that International Design Concepts sued Saks, and that the office of United States Attorney for the Southern District of New York is also investigating.

Saks revealed Friday that the previously announced $20 million will be distributed to 12 vendors, including three owned by the same parent company. The three are believed to be Dana Buchman, Ellen Tracy and Juicy Couture, which are owned by Liz Claiborne Inc.

Buchman, Tracy and Elie Tahari are considered the top three vendors in Saks’ bridge department. “They, along with Michael Kors, account for 70 percent of sales in the bridge area,” said a source close to the company.

Saks’ admission has fired up vendors, which have long complained of being held up at pencil point by department stores. The vendor community is getting ready to have its first official powwow over the problem concerning improper charges.

“There is momentum building for the development of an organization that will broadly represent the vendor community,” said Donald Kreindler, an attorney at Phillips Nizer, a law firm that specializes in the fashion industry. The law firm hosted a presentation on the chargeback issue last month and agreed to be the conduit when the discussion turned to the feasibility of starting a committee that could be an official representative of the vendor community. A preliminary meeting was held on June 1 and the first official meeting, limited to vendors, is expected to be held within the next three weeks at the law firm’s offices in Manhattan.

Wilson’s recent overtures to vendors are seen as an attempt to head off any further legal action that firms could be contemplating. Wilson is believed to be reaching out to vendors at the behest of Martin and the Saks Inc. board of directors.

Wilson called Elie Tahari on Wednesday for a meeting. Tahari offered to go to Wilson’s office, but the Saks ceo reportedly said, “No, I’ll come to you.”

“He told me he wants to apologize for the way the store handled its vendors in the past,” Tahari said. “He said, ‘I’m apologetic and embarrassed, but I will fix it. Mistakes were made. I intend to do the right thing by the vendors and return the money.’”

Tahari added: “They’re going to be proactive and are going to take care of it because they don’t want the lawsuits.”

Calls to Wilson’s office were returned by a spokeswoman for Saks Inc., who said, “We’re not making any comment on the vendor investigation beyond our statement.”

Another vendor, who asked not to be identified, said, “I’ve had contact with Saks. I think they’re trying to right the ship. It’s damage control. Obviously, this will have a far-reaching effect not only on Saks, but other stores. We’re probably just seeing the beginning of it.”

Calls to Liz Claiborne chairman and ceo Paul Charron and executive vice president Angela Ahrendts were referred to a spokeswoman, who said, “This is not something we are commenting on.”

Diane von Furstenberg said she hasn’t heard from anybody at Saks, nor does she expect to. “I haven’t had any chargebacks. My collection sold very well.”

But one bridge vendor found the exercise hypocritical. “Don’t think they’re not still out there trying to get markdown money,” he said. “They still have people on the fourth floor signing margin guarantees. It’s hypocritical and a little dangerous to be making a big deal of it now.”

Saks’ expansion of the internal probe was welcome news for some in the fashion industry.

However, whether there’s a chance that the probe by the U.S. attorney’s office will be expanded is unclear at this time.

As reported, one of the concerns in the vendor community is that the government investigation, because of unfamiliarity with the retail sector, would focus narrowly on just the contractual relationship between the vendor and retailer, thereby focusing just on Saks and precluding a more general inquiry into the allegedly improper chargebacks that are occurring within the retail sector.

Patrick J. Smith, an attorney and partner in the special matters and government investigations practice in the New York office of King & Spaulding and a former Assistant U.S. Attorney in Manhattan specializing in securities fraud, said vendors shouldn’t worry.

“The complexity level won’t deter investigators from getting to the bottom of it,” said Smith, an 11-year-plus veteran of different divisions of the Justice Department.

At least initially, the investigation on the accounting side of the equation is likely centered on whether Saks improperly accounted for the payments and has to restate its financials, while a second component may be whether or not the vendors were defrauded by Saks’ conduct, observed Smith.

As for the fraud issue, Smith said the question may be focused on “whether intentional fraud took place vis-à-vis the vendors.”

According to the former Justice Department attorney, a six-month investigation would be considered “fast,” and probes in general, depending on the complexities of the issues involved, could last a year or more.