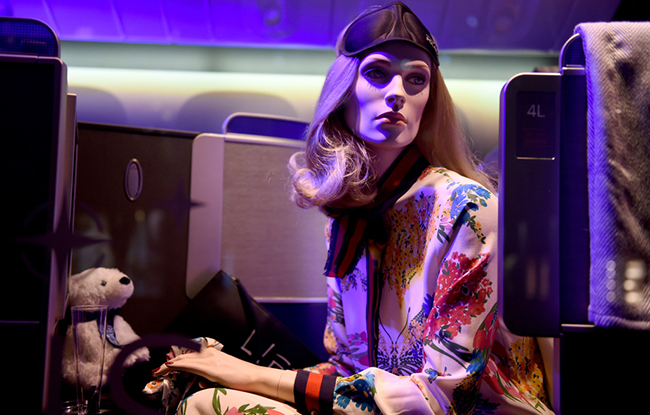 Once again, Saks Fifth Avenue puts a spotlight on its evolving retail enclave in Greenwich, Conn., where today the luxury retailer debuts a new specialty store format, The Collective.

The 14,000-square-foot, two-level space recasts Saks’ contemporary business and is seen as a prototype for modernizing contemporary floors at the company’s stores nationwide.

“It’s all about Saks transforming,” Marc Metrick, president of Saks Fifth Avenue, told WWD. “The Collective in Greenwich is a testimonial that we believe Saks can differentiate itself in the market.”

“It’s a rebranding of our contemporary business,” explained Tracy Margolies, the retailer’s chief merchant. “It’s not about age. It’s about lifestyle, representing fashion, dressing women of all ages and making her feel current, elegant and fashion forward. It’s about us standing for key trends, key items and being first to launch emerging designers.”

The Collective, located at 200 Greenwich Avenue, replaces and advances the contemporary presentation that had been in Saks’ main women’s store across the street at 205 Greenwich Avenue. The main store, opened 21 years ago, had a 4,982-square-foot contemporary area with 23 labels. By comparison, The Collective has 53 labels in a setting three times larger, including 14 brands that Margolies said are exclusive to Saks in the local market.

In addition to The Collective, Saks’ enclave in Greenwich, marketed as The Saks Shops in Greenwich, includes the main women’s store, Saks 10022-Shoe and the upcoming jewelry store to be called The Vault, which is expected to open in May.

The Collective is merchandised by lifestyle, less so by designer, with areas for denim, active, fashion accessories, sunglasses, Tom Ford Beauty and for spotlighting trends and the “it” items of the season — ruffles, stripes, cold-shoulder tops, embellishments, denim and floral print dresses. Handbags are interspersed throughout to round out the looks.

“It’s a modern approach for us,” Margolies said. “It’s all about the experience. It’s more of a boutique,” rather than being a department in a department store. “We really focused on the styling, a curated edit and mixing and matching brands. When you walk into the store, it’s an open environment that’s really easy to shop, with found furniture, bold colors and bold chandeliers.”

Saks took the former Baker furniture store, which had an industrial feel, and softened it with polished concrete flooring mixed with purple carpeting, wide-plank oak floors, track spotlighting, hanging lamps and whimsical fixtures and wall displays, such as jeans held on squares of sheet metal by magnets. There is both femininity and edginess in the environment, created by Saks’ store design and planning team in collaboration with design firm FRCH.

Upon entering, there’s the denim bar and mannequin groupings calling out trends — a Rag & Bone open-back top with a Rails plaid shirt tied around the waist and J Brand denim, for example. Just behind, there’s fashion jewelry, accessories and on a platform level, the Tom Ford Beauty shop and a sunglass shop.

“The idea is that women come here not just for a pair of jeans. It’s about styling head to toe,” said Joe Gambino, vice president and general manager of The Saks Shops in Greenwich. “We have a different selling model here. An associate that sells you denim can also sell you sunglasses, handbags or jewelry. It’s trend dressing.”

The second floor is merchandised more by vendor though, again, trends are called out. Emerging labels such as Alexis, A.L.C., Prose & Poetry and Zimmermann are up front, while just behind are brands such as Vince, Tahari and Theory.

Tom Ford is the sole beauty brand sold at The Collective, to play up the exclusive Saks chainwide currently has on Tom Ford makeup. It’s also because, as Gambino said, “We really felt this brand spoke to the lifestyle.” Other beauty brands are sold at the main women’s store.

The Collective is two blocks from 10022-Shoe at 20 East Elm Street, which opened last October, and adjacent to the upcoming The Vault, also at 200 Greenwich Avenue. Establishing this unique grouping of Saks specialty shops in affluent Greenwich was born out of a need for more square footage to meet the local demand. Saks executives say the main women’s store in Greenwich is among the most productive units in the luxury chain.

While additional freestanding Collectives are not currently being considered, “We certainly see this rolling out to other Saks stores in the near-term,” Metrick said. The Saks flagship on Fifth Avenue in Manhattan is renovating its fifth floor where The Collective will be housed, along with a separate space for advanced designers.

For Saks, it’s been a year of change amid a retail climate that has been particularly tough for department stores and those selling high-end apparel and accessories. But for anyone who suggests department stores are dying, Metrick has a ready response — “Have you seen Saks Fifth Avenue lately?”

He’s referring to efforts to modernize Saks and its fashion message, expand its footprint and present new formats to consumers, like The Collective. “We’ve done so much over the past year,” Metrick said, citing the Saks openings in Canada, Manhattan’s Brookfield Place, Miami’s Brickell Center and in Greenwich.

Coming up: a Saks men’s store opens in Brookfield Place on Feb. 23. The main Saks women’s store at 205 Greenwich Avenue will undergo a renovation starting in November. With the shoes and contemporary businesses relocated to the nearby freestanding stores, other categories such as designer apparel and leather goods will be amplified.

He said taking out footwear from the women’s store and creating a freestanding 10022-Shoe didn’t negatively affect the women’s store. Associates, he said, are all geared to selling the scope of Saks in Greenwich, from door to door, to help cross traffic between the stores. “When you pull a heavy traffic generator like footwear out, it can have an impact. But we have not seen any kind of fall-off there. We do see it pulling a new customer in,” he said.