More than 100 items were created by fashion brands ranging from Heron Preston and John Elliott to Prada.

Saks Fifth Avenue is going even bigger this year to celebrate the Super Bowl.

After a successful fashion-related tie-in in Atlanta for last year’s big game, the upscale retailer has expanded its offering for 2020, tapping 25 designers and brands to create more than 100 exclusive products related to the event.

The Super Bowl will take place at the Hard Rock Stadium in Miami Gardens on Feb. 2.

The initiative is being called The Stunt and will include specially created pieces of ready-to-wear, sneakers and accessories for men from Off-White, Givenchy, Amiri, Moncler, Dsquared2, Heron Preston, John Elliott, Balenciaga and Kappa, among others.

“Atlanta was our first major position with the big game,” said Louis DiGiacomo, general merchandise manager of men’s wear for Saks. He said it drew both new customers and provided existing clients with fresh, exclusive product. “It drove energy and volume into the Atlanta store.”

As a result, the number of products has been expanded this year and inew participants include Heron Preston, Helmut Lang, Burberry, Balenciaga and Prada, he said. 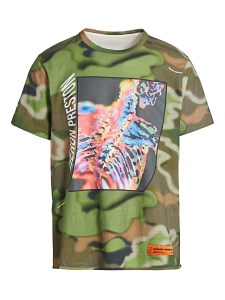 The offerings are heavily skewed to footwear and rtw. Prices will range from $65 for raw denim jeans from G-Star to $2,890 for a Burberry coat.

The Stunt will feature special events and activations at the Saks stores in Bal Harbour, Brickell, and Dadeland, and will include visual installations inspired by football locker rooms at Saks stores across the country. The product will also be carried online, starting on Jan. 6. 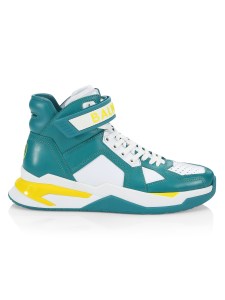 Balmain created these sneakers for the event.

In the Miami market, there will be two marquee events, DiGiacomo said: a Giuseppe Zanotti x Swae Lee launch event at the Brickell store on Jan. 31 and a personal appearance and cocktail party with designers Dean and Dan Caten of Dsquared2 at the Bal Harbour store on Feb. 1. Other events will include a J Brand takeover at Dadeland on Jan. 30 and a Theory takeover at Bal Harbour on Jan. 31; a Givenchy pop-up in Brickell from Jan. 31 to Feb. 2, and a David Yurman trunk show in Dadeland on Jan. 30.

Last year, Saks offered more than 70 exclusive items from 26 brands and hosted a number of events in the Atlanta market, tied to the Super Bowl.

Although Saks is not an official partner of the National Football League, the sports league has dabbled in fashion in the past. In 2014, when the Super Bowl was held in New Jersey, Bloomingdale’s teamed with the NFL and the Council of Fashion Designers of America on the creation of a collection of “haute couture” football helmets.