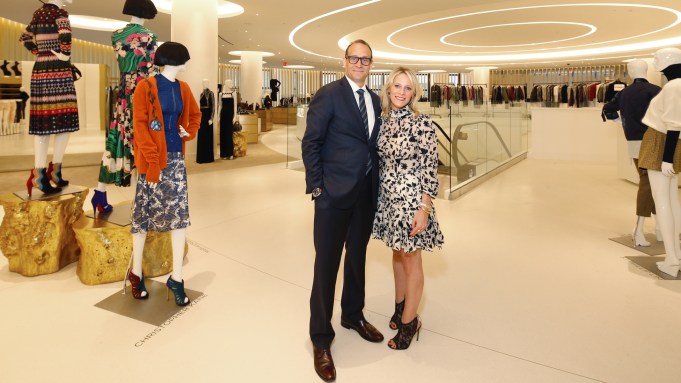 “It’s a boutique,” said Marc Metrick, the retailer’s president, during a preview of the luxury chain’s newest store, which opens Friday at 225 Liberty Street, on the south end of Brookfield Place.

He’s not referring to the size of the space. Rather, he’s explaining what for a department store is an unconventional approach to merchandising and service, with “twists” in the setting to create a different shopping experience.

It’s about “de-departmentalizing the department store,” Metrick said, reciting his mantra for what’s critical in making Saks relevant and a store for the future.

The new three-level, 86,000-square-foot Saks is tightly edited, devoid of shops-in-shop, and offers only women’s fashion with an avant-garde orientation. While the store is smaller than other Saks units, it nevertheless has a sense of spaciousness, with wide openings from department to department and landing areas, so it’s clear what offering lies ahead.

The store is rigged for service, with a Fifth Avenue Club with private suites for personal attention and a “hotline” dispatching Saks stylists to rush out to resolve any kind of “fashion emergency,” whether a customer needs a new tie after a coffee spill, or breaks a heel after rushing to make an appointment.

“Saks downtown may be our second store in Manhattan, but it is the first of its kind. The design is open, the edit is unique and it’s quite simply fun to shop,” Metrick said. “Overall, the way we are approaching Saks is that every store needs to be special. When people walk in, they need to feel good about our stores.”

The setting isn’t the usual retail box. The main-level rotunda space is anchored by a large column containing the escalator and cash wraps. Despite the imposing nature of the column, there are views across the floor and an easy, circular flow, so it’s simple to navigate. The main floor houses designer ready-to-wear, which is unusual placement. The category is typically on higher floors in department stores. Designer handbags and fine jewelry are mixed in with the rtw, making the setting even more distinct.

It’s particularly important for Saks to develop new concepts, elevate its offering and rethink the department store, considering the business has slowed along with the rest of the luxury market. Moreover, designers have many more points of distribution through the Internet and by opening their own stores, and tourist spending has been off. Saks, however, continues to add square footage, having recently opened stores in Canada and Hawaii and it’s currently planning a complex of specialty stores in Greenwich, Conn., and a store in American Dream Meadowlands mall under construction in East Rutherford, N.J.

Downtown, luxury retailing is largely untested, adding risk to the Saks venture, though Brookfield Place has been operating with upscale specialty stores including Burberry, Bottega Veneta and Ermenegildo Zegna. It’s where Saks’ parent company, Hudson’s Bay Co., has made a major commitment beyond the Saks women’s store. HBC has relocated the offices for its Saks, Lord & Taylor, Saks Off 5th and Gilt divisions to Brookfield Place, in a move that occurred in phases over the last several weeks, involved 2,500 people and created a centralized workforce.

In addition, Saks will open in March 2017 a 17,000-square-foot men’s store nearby at 250 Vesey Street, which will focus on modern fashion, have a strong accessories and footwear assortment, made-to-measure and bespoke services and a design that Saks executives said stresses “experiential” shopping. On top of that, a 55,000-square-foot Saks Off 5th will open at One Liberty Plaza next year.

Now for Saks, it’s about projecting a distinct Saks image and vision, as Margolies said, and downtown that’s supported by the careful merchandising — the retailer’s most fashion-forward effort — discreet vendor identification on the selling floor and the noticeable absence of designer shops.

There’s a modern, understated interior design, marked by rose gold and brass fixturing, and terrazzo flooring. “We kept the palette restrained in our choice of materials to emphasize the products and their color,” said London-based architect Richard Found, who worked with Saks to create the store.

One of the most unique features are the brass fins that radiate along the windows like veils. “They serve as a backdrop to the product and at the same time allow views to the outside, and from the outside looking in,” Found said. There’s also a combination of concealed cove ambient lighting, and directional lights to accentuate certain product areas.

“This level of fashion,” Metrick said, referring to the store overall, “will go through to most of our stores as we go forward.”

Asked what he thinks makes the store special from other Saks locations, Metrick replied, “The only thing not different is that it’s Saks Fifth Avenue….It’s luxury, modern fashion, style, service and great experiences. The store environment can no longer be about transaction. Here you come in and it’s about discovery. There are so many different moments in this store where the customer will be excited. It’s about activating the shopping — all the way through.”

He characterized the store as “a complement” to the Saks flagship uptown, yet still intended to attract a wide audience — tourist and nontourist. “Don’t assume this is just for people who live and work here,” Metrick said. “There will be people from  77th Street and Park.”