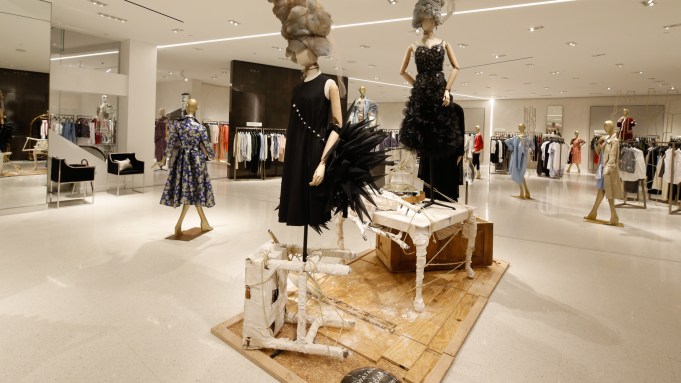 NEW YORK — With the finishing touches still in progress, Saks Fifth Avenue on Thursday quietly opened The Advance on the fifth level of its Manhattan flagship.

Rick Owens makes a statement, having installed a few of his sculptural pieces from his Rick Owens: Furniture collaboration with his wife Michele Lamy, recently exhibited at MOCA. His large gray cast aluminum/ethanol totem is displayed in front, setting the gallery-like tone for the floor.

Throughout, designer collections are subtly separated by tall metallic custom-made partitions, and there are long neon light strips along the ceiling brightening the space. Styles from Commes des Garçons — depicted on mannequins with wild spray-painted headdresses in cotton quilted padding and mesh — get extra play, sprinkled in a few spots across the floor, in a nod to the current Metropolitan Museum of Art Costume Institute exhibit, “Rei Kawakubo/Comme des Garçons: Art of In-Between.”

Several of The Advance designer labels are at the Saks flagship for the first time, though some could have been found at other Saks locations. Hudson’s Bay Co., the owner of Saks Fifth Avenue, is spending $250 million to renovate the flagship property, and that’s helped sway some designers into selling to the store and widening their distribution. Of the 32 designer labels, 12 are new to the flagship: Acne, Cinoh, Isabel Marant, Jacquemus, Marques’Almeida, Monse, Nocturne #22, Noir, Rick Owens, Rosie Assoulin, Sara Lanzi and Vetements.

The open space is merchandised by designer, each with their own little area and with no one rigidly presented in a hard shop format. There’s a fluid feeling, similar to the adjacent 30,000-square-foot Collective for contemporary labels, though the Collective is merchandised by trends and with plenty of mixing and matching of different labels to create unique outfits.

Next up for the Saks flagship in its ongoing renovation will be the fall unveiling of the third floor for European designers including Chanel, Dior and Gucci.

At Last, Richemont’s Vision for E-commerce Begins to Take Shape