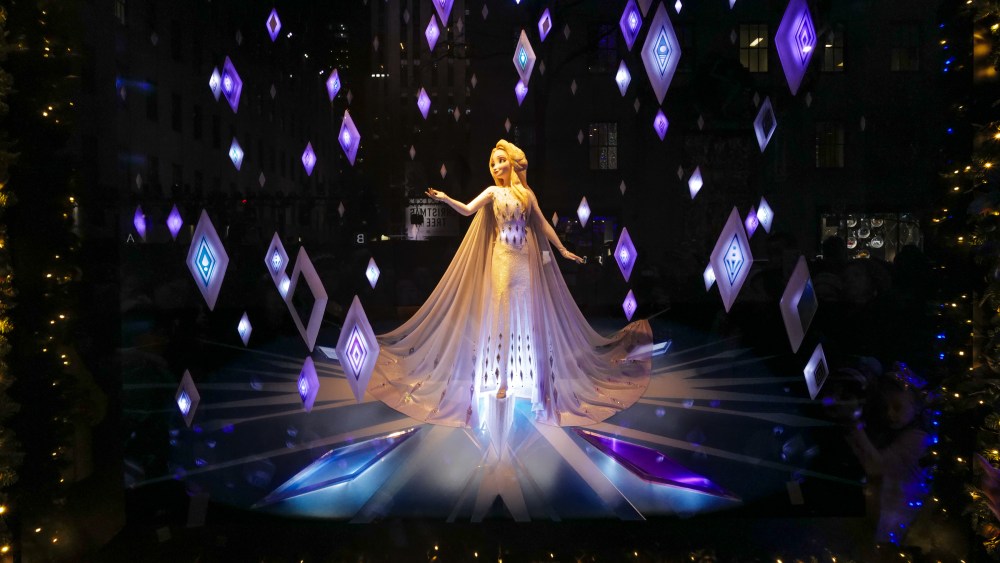 Fifth Avenue between 49th and 50th Streets was transformed into the magical kingdom of Arendelle on Monday evening for the unveiling of Saks Fifth Avenue‘s “Frozen 2” holiday windows. Police officers stopped vehicular traffic on Fifth Avenue and moved steel barricades into the two side streets to hold back the crowd before the big reveal.

Guests of Saks Fifth Avenue and Disney, the retailer’s partner, sat on bleachers erected in Rockefeller Center’s Channel Gardens, across from the flagship, as snowflakes danced across the building’s facade.

Some of the most talented subjects of the kingdom of Arendelle, which was inspired by the Norwegian town of Arendal, entertained guests before the curtains lifted on the windows. The Young People’s Chorus of New York City and dancers dressed in folk costumes with a Scandinavian flair, performed. Idina Menzel, who is the voice of Elsa, performed “Show Yourself” from the movie sequel, and a number from her upcoming holiday album, “Christmas: A Season of Love,” as characters from “Frozen 2,” including crowd favorite Olaf the snowman, frolicked in the street.

“This is our gift to New York City, of course for those who live here, but also those who visit us throughout the holidays,” said Saks president Marc Metrick. “Tonight marks the 95th holiday window unveiling. I’m proud to partner with Disney’s ‘Frozen 2,’ a show of epic proportions, and with the one and only Idina Menzel singing live on Fifth Avenue. I thank the Walt Disney Company for bringing their magic to our store.”

Disney president of consumer products, Disney parks and experiences Ken Potrock told the crowd that six years ago this week, Elsa, Anna, Olaf and their friends “became loved by millions and millions of people around the world. I came [to Saks] myself as a kid many years ago — many, many years ago — to see the holiday windows. There’s no better place to bring the characters and their stories to life than right here at Saks Fifth Avenue.”

“I wouldn’t be doing my job if I didn’t remind you that the store is open after the show,” Metrick said. “There are six fewer days between Thanksgiving and Christmas this year, so let’s get it on. Shop, shop, shop!”

The world of “Frozen 2” comes to life on the ninth floor of the Saks flagship, where the enchanted forest the sisters traversed has been re-created. For the price of a $5 admission ticket, shoppers can follow Anna and Elsa’s journey as they encounter the four spirits of nature. Saks will operate the activation through Dec. 24, and donate proceeds from the sale of each ticket to NewYork-Presbyterian Phyllis and David Komansky Children’s Hospital.

Metrick took to the microphone again, and shouted, “Without further ado, let’s light up the night.”

Snowflakes gave way to Arendelle castle, created on the 10-story flagship with thousands of lights, its spires topped by twinkling stars. Tiny white lights formed icicles that cascaded down from the roof as the castle changed colors, from blues to purples to red, and back to blues again. A fireworks display burst into the night sky and holiday music filled the air.

After the illuminated frenzy across the facade, the curtains lifted, revealing six windows devoted to “Frozen 2.” There was Elsa, looking like a proper Disney princess in a white gown covered with iridescent diamonds; Elsa, practicing her powers; Anna and Kristoff with the Earth Giants; Olaf; brave Elsa riding Nokk, the water spirit, and Elsa in the enchanted forest.