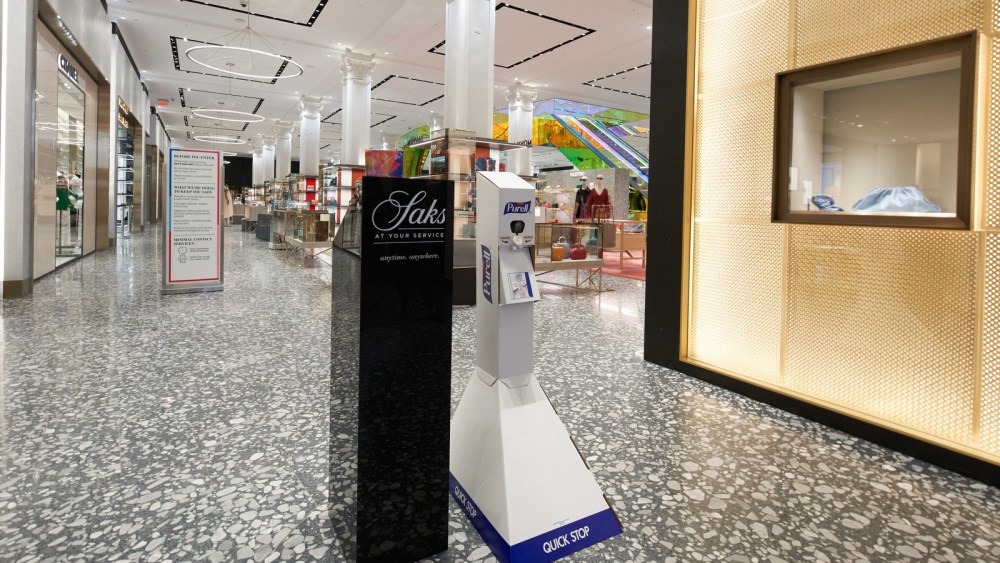 At Saks Fifth Avenue, the Purell stations are up, the escalators are rigged with ultraviolet lighting sterilizing the handrails, and with signs cautioning shoppers to ride three steps apart.

When the Saks flagship reopens on Wednesday for shopping, masks will be distributed; elevators will be restricted to pregnant women, the handicapped and the elderly, and the beauty floor will be contact-free. All the spa rooms will be closed, and the beauty staff won’t apply any makeup or skin care to clients, who instead will receive wrapped plastic applicators to self-apply the products. It’s about demonstration, not application.

Under the city’s pandemic guidelines, Saks’ allowed capacity for people has been cut in half to 5,500, but that’s of little consequence.

“Even on our busiest day of the year, we don’t have that many in the store,” said Marc Metrick, president of Saks Fifth Avenue. “We were built for social distancing,” he said as he spread his arms, gesturing to indicate the ample elbow room between the shops and displays on the main floor.

It’s Monday morning, and Metrick is giving a tour of the flagship to underscore the precautions being taken to minimize the risk of employees and shoppers getting infected by the coronavirus. While it’s two days prior to the flagship’s reopening, other stores opened Monday, as permitted in phase two of the restart of New York City’s economy. Retailers of all types are reopening at their own pace. Macy’s Herald Square and Bloomingdale’s 59th Street reopened on Monday, as did scores of designer and brand stores along Fifth and Madison Avenues, in SoHo, on 34th Street and in the other four boroughs.

Nordstrom Inc.’s six stores in Manhattan — the women’s flagship, the men’s store, the two Rack units and the two Nordstrom Local service hubs — are scheduled to open Wednesday, Vince expects a few stores to reopen by the end of this week and Lafayette 148 plans to open its boutiques on July 6. “We don’t want to be first,” said Deirdre Quinn, the cofounder and chief executive officer of Lafayette 148.

“Even though we are in phase two, a bunch of stores are keeping it curbside and by appointment only,” observed Matthew Bauer, president of the Madison Avenue Business Improvement District.

That’s an acknowledgment that there is more work to be done, to refresh the merchandise, train staff, “but there are a lot more stores open than I initially thought would be,” Bauer said, citing Marc Jacobs, Tourneau, Suit Supply, Montblanc, Berlutti, Acne Studios, and Intermix, among others that opened their doors to shoppers on Monday.

“There are definitely people out shopping and the Apple store was very busy. It had a line outside. Apple provided water and took care of customers as they waited. Restaurants along the avenue all had tables outside and virtually they were all filled for lunch. People are definitely out for that. But the avenue is still in the process of opening, and definitely many stores are still by appointment only,” Bauer said, citing Ralph Lauren and Elie Saab. “They’re set up for that more private, deeper dive experience. What was once an amenity is now standard operating procedure.”

“Opening the doors of our 59th Street flagship today is a milestone for our company and for our community in New York City,” said Charles Anderson, Bloomingdale’s executive vice president and director of stores. “We were excited to welcome back our loyal customers, many of whom were ready to shop as soon as we opened. We saw continued popularity of our curbside and in-store order pickup, along with customers excited to browse everything from skin care to furniture, or enjoy a frozen yogurt to-go from Forty Carrots.”

On Fifth Avenue, “Shopping bags are appearing,” said Jerome Barth, president of the Fifth Avenue Association. “Shoppers could be seen poking furtively through doors and windows to determine if stores are open or not. Many are, such as Louis Vuitton, Prada, St. John, Dior, Saint Laurent, David Yurman, Bulgari, Burberry, Valentino, Rolex, Mikimoto, Wempe, Guess and Zegna, to name some.

“Other retailers will require a few more days,” Barth added. “Tiffany will open tomorrow [Tuesday], Saks Fifth Avenue and Sephora on Wednesday. Nike has set Monday, June 29, as its reopening to the public. Those all offer curbside pickup or service by appointment.”

“On June 9, we opened Macy’s Herald Square with limited operations, and today we reopened the full store to customers,” said a spokeswoman. “Initial response has been really encouraging. Both customers and colleagues were excited to be back in store. Customers have been happy with and are following the new health & safety standards we’ve put in place. Our new curbside pickup and dedicated return center have also been very popular.”

Many stores as well as hotels around Manhattan as of Monday morning still had plywood barriers up, though there were plenty of construction workers with drills removing them. The general sense was these businesses weren’t ready to reopen yet, rather than maintaining any concerns of being vandalized.

Back at Saks, Metrick’s tour began at the employee entrance on 49th Street. Normally, there’s just one entrance for employees. But on Wednesday, there will be four, for social distancing and to avoid delays. Employees have quick health checks upon entering. They are asked several health questions — such as are they coughing, do they have a fever, were they exposed to someone infected by COVID-19 — and then they get a temperature check.

On a typical pre-COVID-19 day, there are 1,500 employees working at the flagship, 2,000 counting brand employees manning concessions. On Wednesday, there will be 1,100 employees, 1,500 counting concessions. A rush of business isn’t expected, given it’s summertime and many New Yorkers have flocked to the suburbs for less populated, more natural surroundings. But based on other Saks reopenings around the country — the flagship is the last of its stores to reopen — Metrick is optimistic. “People are buying luxury. Mostly footwear and handbags,” in women’s, though not so much apparel, he said. “Men’s is bonkers. It’s out-indexing the rest of the store.”

He cited men’s shoes, accessories and men’s designer sportswear. Tailored clothing has lagged, which isn’t surprising in a period of working at home and the more casual apparel that goes with it.

Saks will have 100 Purell hand sanitizing stations around the store; 12,000 bottles of Saks-branded hand sanitizers (not for sale), and constant, very visible cleaning crews on the job through the day, Metrick said. “People want to smell the cleaning supplies. Something killing the germs. Not a perfume.” All six entrances will be open for the public.

New to the store is a central return area on the main floor, though checkouts are still decentralized, as part of Saks’ personalized service. “At Saks, you are transacting with one person, entirely,” from consulting, to  selecting products, to the checkout.

Merchandise that’s tried on will be quarantined for 24 hours, Metrick said, and alterations are being done in a larger suite, for social distancing. The L’Avenue restaurant remains closed until the onset of phase three in the city, though shoppers can order “meal kits” as well as drinks. Saks converted some stockroom space into employee lounges so there are now four instead of one.

The health-care costs are not insignificant. “Between the PPE, the sanitizers, the masks, it adds up,” Metrick acknowledged. And all the precautions have to be spread over Saks’ 5-million-square-foot national footprint.

“We had to start planning this the day we closed,” which was March 16. “I think safety is the new luxury,” the executive said.

Collectively, the changes in the store to protect shoppers and workers from being infected hardly alter the Saks ambience. They’re more discrete than intrusive.

What’s actually far more apparent is the transformation in the inventory. In June in years past, the retailer’s ready-to-wear floors would be crammed with clearance racks and ubiquitous sales signs on spring goods, as well as early full price fall items. “The biggest problem for us has always been that we’re too soon for customers,” Metrick said, in displaying merchandise that’s far from being wear-now. “They don’t want fall yet.”

Asked if Saks was putting more weight on certain kinds of products now, with consumer shopping patterns changing, Metrick replied, “What’s in the store now is less about category intensifications. I think this not when you measure what the long-term category winners are because everything is different now. But you are certainly getting an understanding of product flow and how important that is.

“When we closed, all of our spring products and summer products started arriving. We cancelled some of that, reduced our liability there, and we are bringing some of it in later and bringing in a little bit of pre-fall now,” Metrick said. “Normally, you come on the floor now, end of June/July, and you’d see a massive amount of sale racks and you’d be dense with product. We aren’t because with the pre-fall product, we’ve been able to stage that so it’s coming a little bit later. So our spring product has room to breathe and it looks better and it looks fresher and it looks newer. For the consumer, it’s not going to feel stale or aged. It’s actually going to look seasonally appropriate, exciting and fresh for the first time in 96 years,” Metrick said, referencing the founding of Saks on Fifth Avenue in 1924.