The department store chain is juicing up its SaksFirst loyalty program and rolling out free shipping. 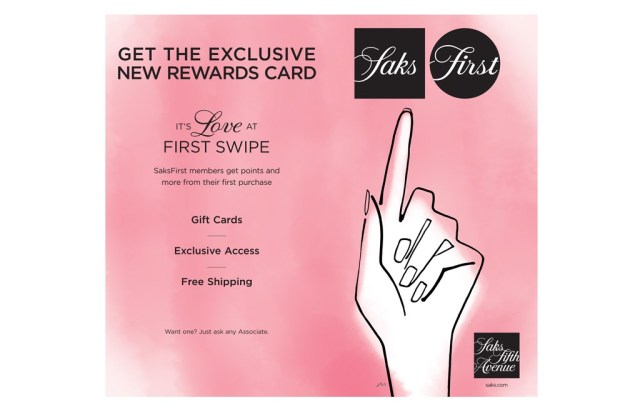 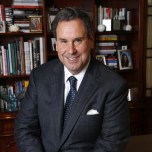 NEW YORK — Saks Fifth Avenue is advancing its omnichannel agenda by juicing up its SaksFirst loyalty program and rolling out free shipping.

It’s a response to a fast-changing industry where e-commerce continues to boom, even after a disappointing holiday season; Amazon.com, eBay, Net-a-porter and other pure plays are pushing harder and harder into the fashion world, and some retailers, such as Nordstrom and Macy’s, already have advanced omnichannel operations.

Saks does gain ground by making its shopping benefits more consistent across shopping channels, enhancing its SaksFirst program with a richer array of perks and rewards and revised rules geared to widen participation and strengthen customer bonds. Free shipping, while costly, is another big step forward for the luxury retailer.

“This changes the game,” Stephen I. Sadove, chairman and chief executive officer of Saks Inc., told WWD. “We’re putting the focus on our core customer and have simplified the SaksFirst program, helping them to understand the benefits and how valuable they are.

“It’s a bit unconventional” for the luxury sector, he added.

• Anyone with a Saks card is automatically in the SaksFirst loyalty program for free, making it more accessible. Previously, a $1,000 minimum spend was required.

• Anyone shopping the Saks Off 5th outlet chain with the Saks card can earn SaksFirst points. Off 5th is steadily adding locations and has become a very profitable part of Saks Inc.

• Free shipping is available all the time on any purchase made with the Saks card at either Saks Fifth Avenue or Off 5th, or on saks.com.

SaksFirst members will have access to “a whole series of events, programs and special offers including exclusive products, early access to new designer goods and meet-and-greets with designers. This is less geared to price promotions,” Sadove said. “There will be very little of that. It’s more geared to experiences and early access.”

Each February, a Saks gift card is mailed out, with a dollar amount, based on points accumulated during the prior year, indicated. One percent of the points is the dollar value of the card. So, for example, if 10,000 points have been earned, a customer gets a $100 gift card.

Saks officials said revamping SaksFirst was a big project lasting several months and involving consumer surveys and focus groups. It may have also involved a greater sensitivity to the competition.

Years ago, Neiman Marcus Group dropped the minimum spend required to become a member of its InCircle loyalty program. Everybody who has a Neiman Marcus card is automatically a member of the program. With InCircle, shoppers earn two points for every dollar spent and receive a $100 gift card for every 10,000 points. The more they spend, the more benefits they receive, including perk cards for such things as free parking, jewelry repairs, invitations to special events, or picking a day to go shopping to earn double points. Neiman’s has six benefit levels, all the way up to the chairman level, when a shopper spends at least $600,000.

According to Sadove, Saks has “hundreds of thousands” of Saks cardholders, but he declined to specify. Saks sold its proprietary credit card operation in 2003 to HSBC, which was later acquired by Capital One.

Encouraging the use of store cards is important because it enables retailers to capture customer data, which is critical to target marketing customers. Over the past few seasons, Saks has been stepping up its target marketing efforts. As Sadove explained, there could be targeted events offering extra points on shoe purchases, or handbags, to incent specific shopping behavior. Each quarter, Saks typically has several broad promotions offering double or triple points. That will continue along with more targeted double- and triple-point days, focused on certain categories.

A campaign spotlighting how SaksFirst has been revamped, called “Love at First Swipe,” launches Sunday with print advertising, and with “5 Days of Firsts” at Saks Fifth Avenue’s Manhattan flagship. On Monday, $100 gift cards will be given to the first 500 Saks card customers to arrive at the store. There will also be special offers on saks.com, where the first 500 people placing orders via the card will get a promo code for $100 off their next purchase. The campaign includes artwork by fashion illustrator Mats Gustafson for ads and visuals inside Saks stores.

On Tuesday, customers who check in on Facebook at Saks will receive a free yogurt on the fifth floor of the flagship. The next day, the store will provide free same-day delivery in New York City for SaksFirst members until 3 p.m.

“The role of points is extremely important,” Sadove said. Now it’s easier for Saks customers to earn them.