The design is the prototype for all future Saks Fifth Avenue stores, including those in New York and Hawaii, which are next on the remodel list. 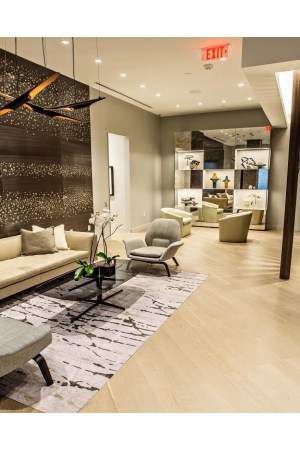 HOUSTON — Saks Fifth Avenue celebrated its new store design in Houston with three days of parties benefiting local charities while deftly raising the bar on the city’s increasingly competitive luxury shopping scene. The design is the prototype for all future Saks Fifth Avenue stores, including those in New York and Hawaii, which are next on the remodel list.

Elevating the luxury experience, while also providing shoppers with amenities that extend beyond purchasing were at the heart of the Saks Fifth Avenue design. Improved sight lines throughout the two-level, 210,000-square-foot space give shoppers a view that’s easily navigable.

The addition of a wide-curved staircase anchored by a bar on the first floor sets the socializing tone and the second floor restaurant 51fifteen Cuisine & Cocktails draws customers up to the women’s department, which includes the newly revamped Intimate Apparel department and improved, more private Fifth Avenue Club.

“We wanted shoppers to come in and be able to see what we have from side to side. It makes for enhanced browsing,” Marc Metrick, Saks Fifth Avenue president, said. “We also wanted to create environments so you can shop, have a drink, something to eat and spend time.”

The first floor is home to an expanded men’s department, as well as the second-largest beauty and fragrance department in the U.S., which includes an exclusive Gucci product boutique.

Going bigger also gave Saks the opportunity to go small with a series of upscale boutiques that line both levels. A dedicated Christian Louboutin boutique is 10022-Shoe department and is the first outside of the Saks New York flagship store.

Choosing Houston as the launch pad for the store design was a purposeful decision and remodel whose time had come. Between the increased push of online shopping options and the intensifying influx of luxury retailers in Houston, Saks was ready to make a big impact, while focusing on relationships.

“It’s not too complicated and it’s not about gimmicks. I want shoppers to come here and enjoy themselves so when they leave, they ask, ‘why did I come here?’” Metrick said. “I want the answer to be, ‘I don’t know.’”

The more than 1,000 people who streamed through the shiny new doors throughout the grand opening events did know why they were there. A private event hosted by Town & Country magazine on Tuesdsay benefiting the Houston Grand Opera kicked off the celebrations, with designer Erdem Moralioglu and Lynn Wyatt in attendance.

The following evening Saks threw another party for The University of Texas M.D. Anderson Cancer Center and once again Moralioglu held court, with Becca Cason Thrash and Diane Lokey Farb showing their support. The store’s official grand opening was Thursday.