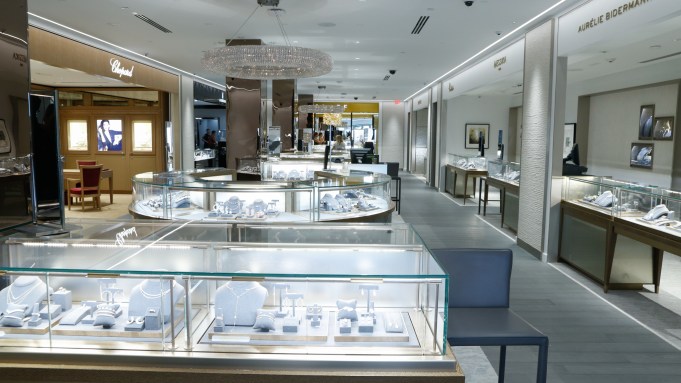 The fine jewelry store, called Saks Fifth Avenue The Vault, completes The Saks Shops in Greenwich, which is a complex of four freestanding Saks specialty stores in close proximity.

At The Vault, “the majority of the high jewelry offerings are one-of-a-kind pieces,” observed Joe Gambino, vice president and general manager of The Saks Shops in Greenwich.

Yet along with the de Grisogono $1.5 million sapphire ring, or Graff’s $150,000 “Princess Butterfly” bracelet with a secret watch, The Vault offers, among other items, 18-karat gold Repossi ear cuffs and Nikos Koulis multicolor stud earrings, both priced around $1,000. “We have opening price points. It’s not unapproachable here,” Gambino added.

Located at 200 Greenwich Avenue across the street from the original Saks women’s store, The Vault is an elegant, subdued 6,000-square-foot setting with crystal chandeliers, columns clad in copper and handcrafted wall coverings. With the exception of the Saks Fifth Avenue flagship in Manhattan, The Vault is larger than the fine jewelry departments inside Saks’ full-line stores, by a few thousand feet.

Most prominent are the shops for Bulgari, Chopard, de Grisogono, Graff and Repossi, at 250 square feet or so each.

From brand to brand, “the offering is not duplicative,” Gambino said. “We’ve created an assortment that stands alone” reflecting a spectrum from modern to traditional, understated to edgier, and from “wearable on a daily basis” to special event jewelry.

The services include two private viewing rooms, one shared by all the fine jewelry firms, and another that Graff has established for itself; jewelry design; repair, and cleaning.

The Saks Shops at Greenwich complex also includes The Collective for contemporary collections, which opened in February; the Saks 10022-Shoe store opened in October, and the Saks women’s store, which opened more than 21 years ago. It’s an experiment by Saks in operating smaller specialty stores, spurred by a need for greater selling space in a very productive setting and enabled by vacated real estate that Saks opportunistically grabbed.

There’s a consistency to the design of The Vault, The Collective and 10022-Shoe, with the Saks store design and planning team working in collaboration with design firm FRCH, in their strong residential feel and metal and earth tones. The women’s store will be renovated next year.

Greenwich isn’t the only place where Saks operates specialty stores; there are freestanding women’s and men’s stores in Brookfield Place in lower Manhattan. Although there aren’t plans for other specialty shops, Saks executives don’t dismiss the possibility in the future, and elements of the formats in Greenwich are being incorporated into other locations, with the 10022-Shoe format already in several Saks sites, The Collective rolling out to the Saks Fifth Avenue flagship in Manhattan last month and soon to other units, and The Vault planned to open in a new lower level in the flagship next year.

Asked about the state of business in The Saks Shops in Greenwich, Gambino replied, “We feel very confident in this market. Our expansion would illustrate that. It’s really enabled us to offer an elevated customer experience.”