Saks Gets Kick From Cashmere

Saks Fifth Avenue is getting "Wild About Cashmere." 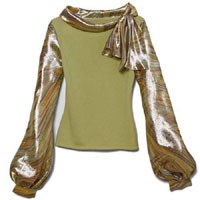 NEW YORK — Saks Fifth Avenue is getting “Wild About Cashmere.”

That’s the theme of the store’s fall promotion, during which the Saks flagship here, all 56 domestic branches and the two Middle East licensed locations will be awash in cashmere like never before. So will the store’s ads and windows, with the addition of goat sight gags and mirth.

But the promotion is not simply a celebration of cashmere and goats, particularly those from Mongolia that provide the world’s most luxurious fibers. It’s also a sign that business goes on at Saks Fifth Avenue despite its difficulties. The company is under investigation for improper vendor allowances and related accounting issues, and has let several executives go.

As a sign that Saks executives are focused on the future, they said Wild About Cashmere is the first in a lineup of major annual promotions geared to give a seasonal theme for buyers so as to provide a consistent style attitude through all categories, and make the shopping more compelling.

“We are creating a temple of cashmere,” declared Andrew Jennings, president of Saks Fifth Avenue. “It goes across all the stores. It’s a totally integrated event.”

“We are a company that is changing so much, and part of the change is how we buy,” said Ron Frasch, vice chairman and chief merchandising officer. “We are putting great emphasis on developing product and congruency of product across all product groups so there is a Saks Fifth Avenue fashion point of view. The role of the buyer has changed from someone who selects, to development. It’s very different.”

Saks, he said, is shifting from “a house of brands to a store with a point of view.”

For the fall season, “We would like to be seen as the cashmere-mongers,” said Terron Schaefer, senior vice president of marketing.

Saks has apparently received plenty of vendor support. The merchandise exceeds the de rigueur array of cashmere sweaters and scarves that stores of all sorts tend to heavily assort around holiday.

The bread and butter of Saks’ cashmere business has been private-label sweaters in the $250 to $300 range. But next fall there will be cashmere jump ropes, cashmere boxing gloves, and tents, sleeping bags and hammocks all in the yarn.

There will also be motorcycle helmets lined with cashmere; cashmere iPod covers; cashmere candleholders with a felted, rigid feel; cashmere chargers to keep your dinner plate warm; a women’s trapper hat in cashmere, and plush stuffed goats for the kids.

Rebecca Moses is developing different kinds of men’s wear, ready-to-wear, accessories and home products, including a sweater salon with products in the $700 to $2,000 range. Moses, known for her knitwear, “really understands yarns and the manufacturing of it,” said Frasch.

Loro Piana, Zegna, Brunello Cucinelli and Colombo are also providing unique products and are key suppliers for the event, while Donna Karan is relaunching her Cashmere Mist fragrance and body cream line to tie into the event, though other stores will also carry that.

The event kicks off on the evening of Sept. 20 with a benefit for the Central Park Conservancy, and will go into full swing Sept. 22. It will be hyped for four weeks, though Saks expects to sell large amounts of cashmere product for a 12-week period through the holiday season. The Italian Trade Commission is a major sponsor of the event.

The company would not provide projections on how much volume it expects Wild About Cashmere to generate. However, Frasch said about 600 items are in development, either products developed by Saks or in collaboration with designers and vendors. “Every division is involved,” he said.

The 7,000 Saks Fifth Avenue sales associates are involved, too. They will be given four to five hours of cashmere training, to learn about the character and quality of the fiber, and how to sell it.

Apparently, anything goat goes. Goat cheese and wine tastings will be in 12 stores, two five-story-tall goat banners will be brandished at the flagship store, and goat mannequins chewing on outfits will be in the windows. There will be a colossal fiberglass goat mounted atop the flagship. Saks even has a special shopping bag design featuring the Hohhot family of goats at the entrance to the flagship. The Hohhots come from Mongolia by way of Italy and will be living on the roof at Saks — or at least in the imagination of Saks officials, much like Eloise at the Plaza Hotel.

A few real goats, they promise, will be making guest appearances. The Hohhot goat family saga, conceived by Schaefer, is depicted in a book being published by Harper Collins and written by children’s author Douglas Love.

Noting that the promotion will touch every family of business that Saks sells, and that all stores are participating, Schaefer said, “Our whole concept is to make it big, make it exciting, new, different, and do the unexpected. We want to make cashmere into a lifestyle concept and make it something different from being so ubiquitous and price-driven.”