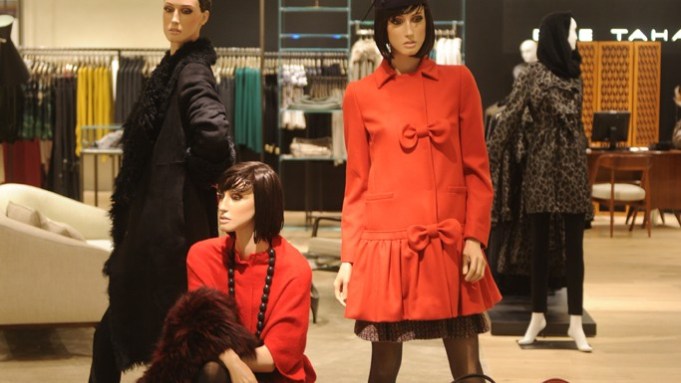 It may not be outright luxury, though there’s that feeling.

That’s how Saks Inc. executives couch Wear Now, the new fourth floor at the flagship making its debut today with a private party in the evening.

Wear Now is Saks’ reengineered bridge business, which has undergone two years of remerchandising. Labels that lost relevancy were dropped; others reinvented or bringing exclusivity have been added. The floor, which has been renovated with distinctive in-store boutiques and an open flow, is geared for customers seeking service and fashion currency of a caliber typically associated with the designer floor, yet they require lower prices, more generous fits and styles that are less dressed up, casual or work-related.

Exclusives include La Via 18, a brand created for Saks by Piazza Sempione, with a European fit and sensibility; Rivamonti from Brunello Cucinelli, and Altea, a line from Milan with cashmere blends and spirited print linings. Among the largest shops are Elie Tahari, which is front and center; Lafayette 148, in the rear by the Fifth Avenue windows, and Ralph Lauren Blue, flanking Tahari. Burberry Brit, Tory Burch, M Missoni, Red Valentino, Boss Black by Hugo Boss, DKNY, Eileen Fisher and Josie Natori are among the other shops. Jackets are priced $500 to $700; trousers, $150 to $300; tops, $175 to $300, and knitwear, $150 to $400.

“Wear Now has the same level of sophistication, ambience and service of any of our floors. That’s the big message,” said Ron Frasch, president and chief merchandising officer, during a preview of the 32,000-square-foot Wear Now space, which has 17,500 square feet for selling and a 370-square-foot personal shopping area, no appointment necessary. Service is also beefed up with 35 new associates hired, each assigned to different shops.

“The most important thing is that it is a new shopping experience for our customers,” added Joseph Boitano, group senior vice president and general merchandise manager. “It’s a really different approach to product. The floor is spacious and open. The fitting rooms are larger. There are more clienteling options, and we really never had shops” in bridge, a term Saks officials have stricken from their vocabulary.

Wear Now has 16 brand boutiques and areas to spotlight trends, classifications and emerging designers, and 25 fitting rooms. The color palette is neutral, with whites and grays, and there’s a mix of porcelain and wood flooring in different textures and patterns to delineate shops. Cash wraps are discretely situated in the back of shops, to maximize selling space and still be accessible. “There’s a sense of exploration — a little bit of newness. It’s intimate. It’s residential. We didn’t want it to be intimidating,” Boitano said. “It feels like you can maneuver.”

Serious upgrading is evident elsewhere at the flagship. Cartier and Burberry London shops will open in October, following Saks’ Michael Kors and Escada openings this month. A children’s shoe department has been installed on nine, and on the main floor, most cosmetics counters are slated for renovations. Yet the single largest project this year was reinventing Wear Now. “We have a very big [sales] plan for this floor,” said Frasch. “In the Nineties and early 2000s, this was a monster floor. It’s very core to our DNA. It’s critical to bring it back and make it something new. It’s a major, major capital investment. In the coming months, we will introduce a soft version of Wear Now to half a dozen stores.”