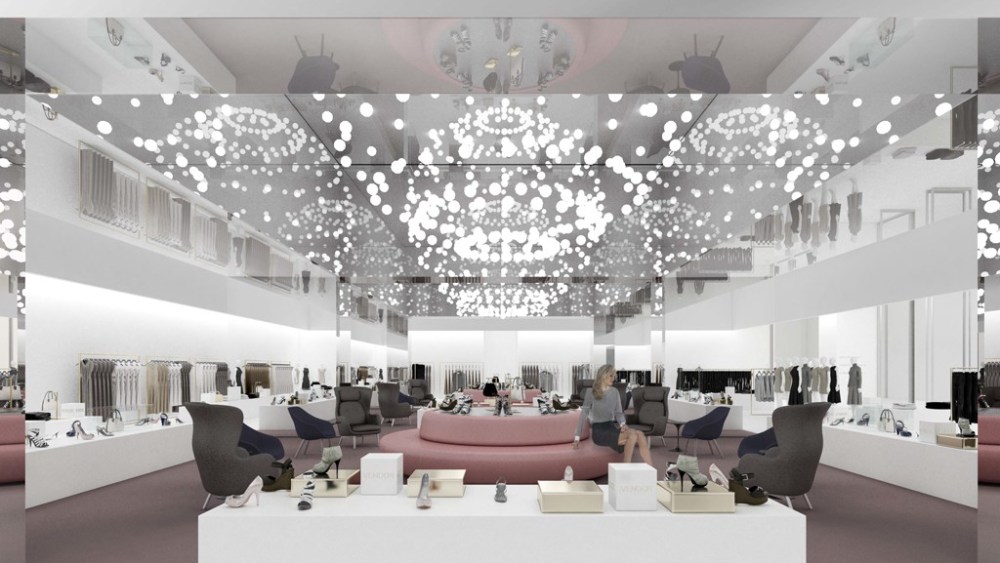 NEW YORK — The opening is a year away, but it’s none too soon to discuss the vision for Saks Fifth Avenue in Brookfield Place.

“It will be a fusion of the Saks DNA with a modern relevance,” Marigay McKee, the president of Saks Fifth Avenue, said Wednesday in her first interview about the site, in the burgeoning financial district.

“It will be a very, very cool store with a good, better, best approach. Just because we’re selling Fendi or Gucci doesn’t mean we shouldn’t be selling Longchamp as well, or Tumi leather — large-volume products as well as the high end,” she said.

En route to the Michael Kors show Wednesday, McKee openly discussed the 85,000-square-foot downtown project. It’s among several she’s taken on at Saks, including an opening in Sarasota, Fla., in October; another that’s set for San Juan, Puerto Rico, next month, and the expansion into Canada, starting early next year in Toronto. The team is also figuring out how to renovate and reconfigure the Fifth Avenue flagship, and striving to remerchandise the chain in a bid to elevate profitability and the image.

Between it all, McKee said, “I have spent quite a bit of time downtown, and I have been to the site quite a few times. It’s really important to have a Saks Fifth Avenue downtown. There are good schools, great views, great apartments. Time Inc. is moving downtown. There’s Condé Nast,” at One World Trade Center. “Downtown is new and contemporary and definitely the place to go. When you look at that customer, the affluence level is very high. Downtown is becoming a hub for retail, restaurants and luxury real estate. Just looking at apartments downtown, in a half-mile radius, I was shocked. The most incredible buildings are going up.”

Recently, she spent a Saturday exploring the area with a real estate agent, to take in the demographics.

“It’s young families, guys in the finance industry, people from out of town buying second homes, very high-income families. That’s the key. A lot of those people don’t want to go uptown for a shopping experience. I don’t want to say there’s been a mass exodus [downtown], but New York is a tale of two cities. There’s an uptown and a downtown. It’s a bit like London. There’s an east and a west London,” said the British McKee, who was at Harrods before Saks.

Compared with other parts of New York City, she sees downtown as having “a cooler, edgier crowd of people, more determined shoppers who don’t have as much time.” That means customer service has got to be intensified for the downtown clientele and its heavy concentration of busy financial workers and young, time-pressed families. She portrayed the second Manhattan location as being built for shopping efficiency, and rigged with technology to improve service. “We are definitely looking at express tailoring,” she said, as an example.

The three-level store in Brookfield Place, at 225 Liberty Street, will open in spring 2016. It will sell beauty, accessories, footwear, jewelry, women’s ready-to-wear and men’s wear, covering the major families of business that Saks specializes in. In that sense, it qualifies as a full-line Saks. Asked if it would be a scaled-down version of the 650,000-square-foot Fifth Avenue flagship, McKee replied, “I don’t think that’s a fair assessment. It’s more of a Saks concept store, like Colette in Paris or Maxfield in L.A.”

Richard Found, the founder of Found Associates, the London-based architectural firm on the project, said, “Unexpected encounters with striking architectural features” enhance the shopping experience. He cited a two-story central rotunda, veiled by double-height brass fins at its perimeter that reflect light into the store and capture the sun’s path through the day. He also cited the rotunda’s cylindrical marble tower housing an escalator, and an amphitheater on two populated with mannequins.

“Found has worked closely with Saks to develop a new identity and unique shopping experience, exuding luxury with an understated palette of materials and innovative technology,” said Kerry Mader, the retailer’s executive vice president of store planning and design.

On the merchandising front, “We’ve already got 85 percent of the matrix,” and there’s still room to “add, subtract, divide and multiply,” McKee said in her chirpy, optimistic manner. “Really, accessories, shoes and beauty will always be big drivers. Men’s will be a big driver, too. Jewelry might be good there. We have received a lot of interest” from jewelry firms. “We do want to focus on shoes. That’s a big opportunity for us.” The store will have a circular footprint in shoes and some other areas.

“A large denim department — that’s definitely something we are looking at as well,” she added, noting that’s consistent with the intention to exhibit range in the merchandising, from affordable casual clothes to higher-priced tailored clothes. “It’s one of those things where you’ve got to do low as well as going high.”

For competitive reasons and because there’s still flexibility in determining the lineup, McKee declined to list the designers and brands on board.

While editing for a downtown customer with different preferences from uptown shoppers poses challenges, “It’s also a bit of fun” McKee said, and similar to merchandising stores in other markets like Boston where the edit is more conservative and classic, and focused on designer. Or Bal Harbour, Fla., where the edit is skewed to the preferences of the large Latin American and Russian clientele.

“For downtown, it would be the same premise while focusing a lot more on contemporary with an element of designer,” McKee explained. “The emerging French contemporary brands very much fit into the downtown market.” Many of them, such as Sandro and Maje, operate leased shops inside department stores, and that’s fine by Saks. “It won’t be discernible to the customer,” McKee said. “For us, it’s more about brands and adjacencies and the mix, than it is about the business model.”

Saks downtown, McKee stressed, “is more about being a concept store with a very fluid design, and less about shops with big brand logos. It’s more of a designer and contemporary edit.”

She acknowledged some duplication in the offering is to be expected, with certain brands planning their own boutiques in Brookfield or elsewhere in lower Manhattan. That’s OK, too. Department stores, she said, should be “all about mixing it up,” so if a customer comes to the store for one brand, they could stumble upon another label that they just might shop at Saks, even if it’s got a second point of distribution nearby, outside Saks.

Food won’t be part of the offering given the limited space and what Brookfield offers. “One thing Brookfield Place is not short on is gastronomy and hospitality,” McKee said. “That doesn’t mean we wouldn’t do a pop-up with a Champagne bar or serve at an event.”

While downtown is rapidly developing and drawing a wave of retail that’s yet to open for the most part, store traffic remains a big question. “We don’t know what’s going to happen,” McKee admitted. “We can only tell you what we feel. I’ve spent a lot of time looking at consumers, looking at the area. It’s very interesting, new, uncharted territory. We need to buy for customers of tomorrow as well as customers of today.”

Adjacent to the Saks store, parent Hudson’s Bay Co. is leasing 400,000 square feet of office space in Brookfield Place to create a central home office for all of its business units scattered around Manhattan, including the department store group, Saks, Saks Off 5th, digital operations and HBC shared services.

Saks in Brookfield will be close to a Saks Off 5th, which will open at One Liberty Plaza, another Brookfield property, in fall 2017. Saks officials say Off 5th and Saks Fifth Avenue have different customer bases, and generally don’t cannibalize sales from each other, though they also say cross-shopping is apparent. In a handful of cases, Off-5th operates near Saks Fifth Avenue, establishing precedent for both being viable in close proximity of each other.

There’s been speculation that opening a Saks store downtown was tied to the decision to relocate the offices, though HBC chairman Richard Baker has denied that and has said that initially, he explored downtown for just a Saks store, rather than offices or Off-5th.

“We always wanted to have a store downtown,” McKee said. “I believe you’ve got to have an uptown and downtown strategy. Why wouldn’t we when downtown is growing so fast?”