The department store is growing its footwear footprint with a refurbished and expanded 8th-floor shoe department in the works. 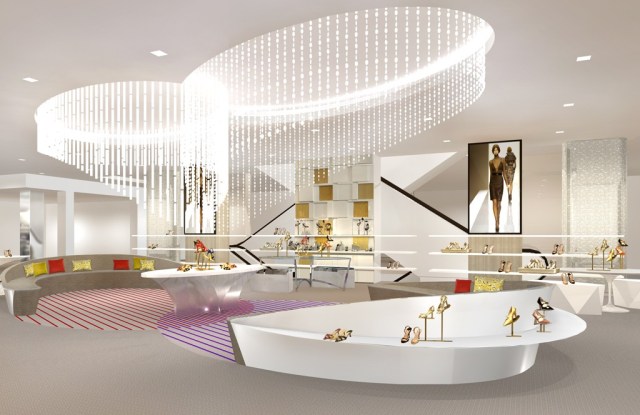 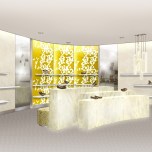 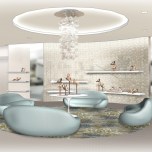 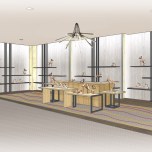 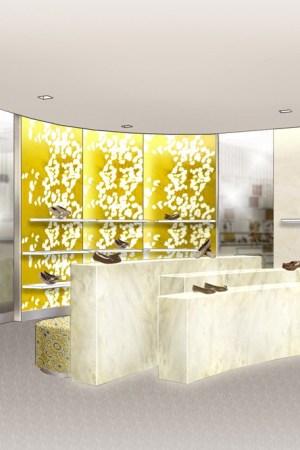 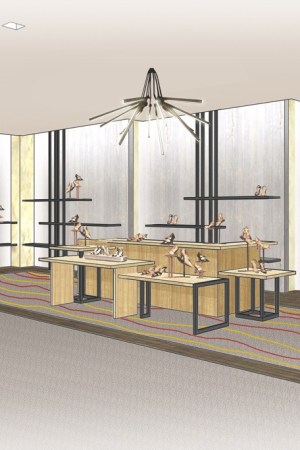 This story first appeared in the June 18, 2012 issue of WWD. Subscribe Today.

On the eighth level of Saks’ Manhattan flagship where shoes are sold, Ron Frasch, president and chief merchant of Saks, stands like the gatekeeper. “I watch the women get off the elevator, with their eyes wide open. They’re not walking onto the floor. They’re kind of diving into it. It’s an emotional purchase,” Frasch said. “I wish I could figure out how to do that on every floor.”

Saks is pumping up its five-year-old shoe strategy, called 10022-Shoe, at the same time that Barneys New York and Macy’s revamp their shoe floors, attesting to just how hot the category is. Barneys on Madison Avenue will reopen its shoe floor next month, and this fall, Macy’s says it will open the world’s largest shoe floor. Selfridges and Harrods have been innovating as well with expanded shoe departments.

At the Saks flagship, the 10022-Shoe floor is growing to 32,150 square feet, with 16,650 for selling and 15,500 for storage, from a total of 22,000 square feet previously. The expansion brings the entire shoe assortment together — designer; Wear, which is bridge; contemporary; day, and evening — with contemporary shoes relocating from five to a designated area on eight east of the escalators where gifts were housed. Gifts move up to nine, where a new concept including Rizzoli books and John L. Strong stationery is being developed.

The expansion is an attempt by Saks’ to cobble together a shoe assortment that’s more balanced, less dependent on big brands and formal offerings, and layers in additional casual styles and those with an aura of versatility, meaning they’re just as suitable for officewear as for dinner afterward. “We are just beginning to open up a whole new area with significant volume potential by servicing more of the customers’ lifestyle,” Frasch said.

The additions should increase revenues and bolster the image, too. The store is sometimes perceived as “big-brand” oriented, and not as quick as certain competitors to seize the latest fashions and display new designers, but with 10022-Shoe, “We want to bring attention to the fact that we are elevating the level of fashion,” Frasch said. “People say we dedicate a lot of space to the big brands, that there’s a lot of Chanel, Prada, Louboutin, Gucci. Big brands consume real estate. Sometimes it’s hard to fit in the new brands. Customers do want more fashion. They are looking for new brands that are the leading edge of fashion, like Nicholas Kirkwood. Perhaps they also want more fashion from the brands we buy. But in all of our categories we constantly have to push and challenge ourselves to enhance the fashion quotient” while being mindful of potential risk to margins that comes with trendier fashion and untested designers, Frasch said.

According to Frasch, 10022-Shoe ranks as the most productive area in the store, next to the main floor. When Saks opened the shoe floor in 2007, officials said it was so big it should have its own zip code (which the government approved) and dubbed the space 10022-SHOE. “We expect it will be highest-volume upscale shoe floor in America,” he said.

But is the shoe momentum cyclical, like other categories tend to be? “Normally I would say yes,” Frasch replied. “But over the past six years it has been very steady, significant growth. It kind of defies the normal cyclical patterns of products, which doesn’t mean shoes won’t ever slow down.”

In contrast, women’s apparel overall isn’t as robust yet remains the biggest part of the Saks business. The market has been struggling for several seasons, frustrating retailers. “It’s incumbent upon us as merchants to figure this out,” Frasch said of the poor performance of women’s apparel. “If the customer is not buying to the level she was, we are not satisfying her. But a lot of it is in the brands.”

Industry sources estimate shoes at Saks is a $300 million to $400 million dollar business. Saks would not comment on the estimate. Saks’ women’s apparel business in 2011 generated $1.05 billion, or about 35 percent of the chain’s $3.01 billion in total volume. The fast growing accessories category generated $580.6 million in sales, or more than 19 percent of the total.

With shoes, “The design creativity in shoes is completely awesome,” Frasch said. “Every season when I’m in the market, I’m amazed how someone can re-create a shoe and add elements that make it emotionally exciting. Even if it’s a pump or peep-toe and not necessarily something extreme, they are completely energized by the creativity.”

The shoe department, currently under construction to expand on the east side of the escalator bank and also being refurbished in its original space, will show its new face in mid-August. “It’s been five years of enormous traffic. It just gets beaten up,” Frasch said.

The space will be manned by shoe runners who gather shoppers’ selections while the sales associate is working with the customer and service navigators who are stationed at the foot of the escalators to greet customers and direct them to brands, trends or associates. There will also be 10 iPads for customers to browse saks.com and Saks’ social media platforms and a live shoe cam directed at shoppers’ shoes and fed onto screens showing customers’ shoe trends. Saks is creating a sight line through the escalator bank to better link up the original 10022 space to the area it’s expanding to.

While giving the footwear category a much bigger footprint, “I think having an entire environment for shoes is almost too much,” observed Frasch. “We are going to have a couple of non-shoe shops that will open next spring. By the time it’s all done it will read shoes but have some interesting surprises. It will be totally complementary and something you wouldn’t expect from a shoe floor.”

The 10022-Shoe strategy will be rolled out to four more Saks doors this year — Troy, Mich.; Chevy Chase, Md.; St. Louis, and Bal Harbour, Fla., bringing the total to 14. “They’re all versions of New York,” Frasch said referring to the seating and decor, presentation tables, fixturing and commitment to brands. “It’s a big inventory and big sales plan commitment. It’s not just a bunch of pretty furniture,” though Frasch noted the large curved sofas and settees encourage customers to socialize and notice each other’s selections. “10022-Shoe is an incredibly disciplined strategy,” Frasch added. “We will not do it unless we can fulfill all the requirements of 10022-Shoe. It involves a commitment to a defined number of core brands with a combination of depth and breadth of product, and a flow of new brands. We have a designated amount of new brands every year.”

Saks may also be doing an exclusive project with Christian Louboutin. Frasch would not comment on that, though he did say, “When we sit down with vendors and do the buy, the first thing we work on is exclusives. We have exclusives with about 90 percent of the brands we do business with, and how much varies by brand. It’s pretty much a fundamental component to our brand negotiations.”