Saks Shows Its Sweet Side With Holiday Windows 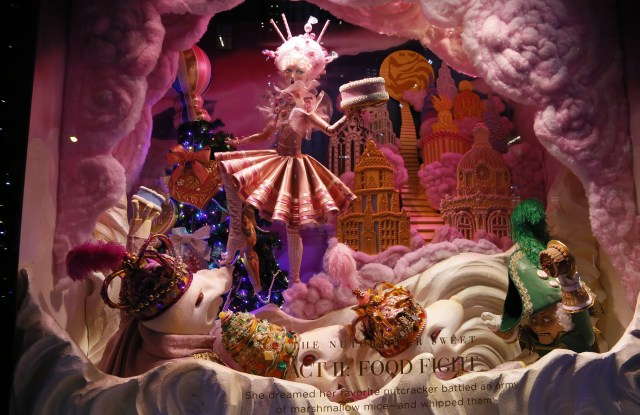 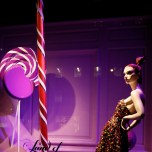 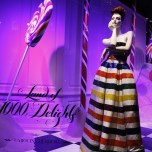 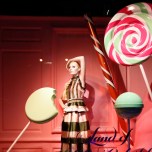 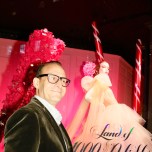 Metrick, wearing a velvet jacket befitting his role as impresario, welcomed the crowd on a cold Monday evening, huddled in bleachers on the west side of Fifth Avenue facing the flagship, many drinking from Saks’ signature canisters of hot chocolate as the holiday windows were unveiled. Then came a troupe of 85 dancers from the American Ballet Theatre Jacqueline Kennedy Onassis School Pre-Professional Division performing a rendition of “The Nutcracker Suite.”

On either side of Saks’ six central holiday windows are also “candy couture” windows showing one-of-a-kind dresses created by Erdem, Carolina Herrera, Marchesa, Jason Wu and Naeem Khan, which can be ordered. “We asked the designers to interpret this idea of a Candyland. So Mrs. Herrera, for example, created a strapless gown thematic of great colorful candy cane stripes,” said Saks’ senior vice president and fashion director Roopal Patel. Marchesa’s gown, inspired by giant cotton candy, is “very dreamy, almost like a cloud,” Roopal added. “We really gave the designers multiple visual inspirations very much in line with what our team was utilizing to build the windows.” Wu’s creation was very much in line with fluorescent M&Ms, and Erdem’s and Naeem Khan’s gowns were also inspired by holiday treats. Mark Briggs, executive vice president, creative, for Saks’ parent company the Hudson Bay Co., is credited with devising the holiday theme.

The event, sponsored by MasterCard, was capped by a stunning 10-story laser light show covering the flagship facade, fireworks spewing off its roof, and then people entering the flagship for live music, and queuing up for a cornucopia of sweets, and do some shopping. There was a jazz ensemble in men’s wear, a roving choral group from New York University, and MasterCard “wheel of delights” on the ninth floor, which is up through Dec. 24, to spin for a chance to win a prize. Several ballet dancers stuck around for photo ops with visitors. “This is 2016. If it’s not Instagrammed, it didn’t happen,” kidded Metrick.