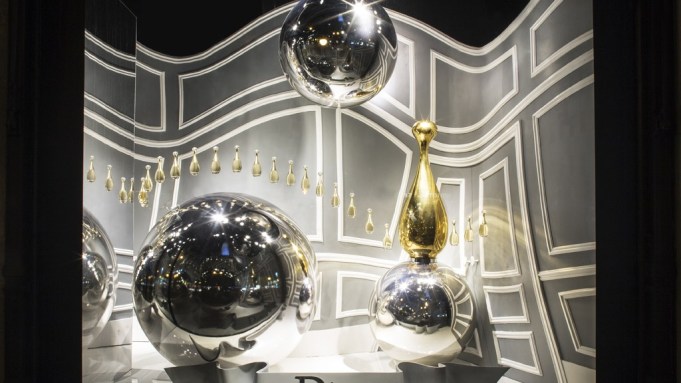 PARIS — If the Dior windows that just went up at the Saks Fifth Avenue flagship were a René Magritte painting, the winking title might be “This Is Not Surrealism.”

The French fashion house’s latest takeover of a major department store incorporates invisible mannequins and warped French moldings across 17 windows lining Fifth Avenue plus 49th and 50th Streets. They dovetail with the surrealist touches in the fall women’s ready-to-wear collection by Raf Simons. All other categories of Dior products — from men’s wear to fine jewelry — are also showcased.

“These are the type of events which are very effective in conveying the image and telling the story of Dior,” said Sidney Toledano, chief executive officer of Christian Dior, which in recent months also staged large-scale invasions at Printemps in Paris, Harrods in London and GUM in Moscow.

Toledano noted the big splash at Saks, coinciding with New York Fashion Week, would have a resonance far beyond Manhattan, given all the international visitors to the fashion capital.

Dior, Saks and actress Jessica Biel are to fete the collaboration on Friday night with an event that incorporates an “art walk” and culminates with a party on the third floor in a space reprising Simons’ show set for the fall collection, all-mirrored balloons reflecting a floor painted to resemble a cloud-dotted sky. Meanwhile, a new lipstick fronted by Natalie Portman, Rouge Dior, will be launched on the main floor.

The Saks showcase coincides with a strong growth vector for Dior, particularly Stateside.

Elaborating on first-half results that were reported in July, Toledano said revenues in the second quarter rose 22 percent at average exchange rates, and 24 percent in its own retail stores.

Dior, which earlier this year christened a boutique in Dallas, has “a few projects” with U.S. department stores in the works, and a large unit is planned for Miami’s design district next year, the executive noted.

Ron Frasch, Saks Inc.’s president and chief merchandising officer, said the Dior collaboration was a year in the making, and “we thought why not do it when New York has all eyes on it for fashion week?”

He agreed such large-scale operations are “essential for the business, for us to not only build beautiful shops-in-shop and provide impeccable merchandise assortments, but to also celebrate our brands together through amazing events.”

Frasch lauded Simons’ new modernist vision for the brand and his “tremendous talent.”

“Spring did well for us, and overall our customers reacted well to pre-fall across brands. They love the in-between deliveries that provide a true sense of buy now, wear now,” he said, adding that Dior women’s rtw, shoes and handbags are “all performing strong for us right now.”

Attendees at Friday’s party are to go home with an advance copy of the third issue of Dior’s in-house magazine, with “Hunger Games” star Jennifer Lawrence on the cover.