Inspired by the superhero in every woman, the I Am Wonder Woman collection was designed in honor of Women's History Month.

Saks Fifth Avenue is teaming with Venus Williams and Warner Bros. Consumer Products and DC Comics Inc., to launch the new I Am Wonder Woman Collection from Williams’ activewear and lifestyle brand, EleVen by Venus Williams.

In recognition of Women’s History Month, Saks has a special window installation dedicated to the collection at its New York flagship from today through March 29. On International Women’s Day on March 8, Saks will host a virtual workout with Williams on Saks Live, the retailer’s digital events platform that lives on saks.com, which will allow customers to shop and view events in tandem. 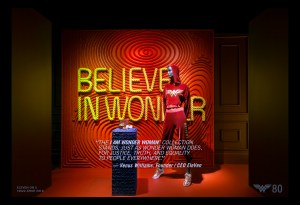 The Saks Fifth Avenue windows featuring the I Am Wonder Woman Collection by EleVen by Venus Williams.  courtesy shot.

The items are designed with Repreve fabrics that are 100 percent recyclable and engineered from recycled water bottles gathered from the ocean. The color scheme is blue, red and gold, representing empowerment, independence, confidence and strength. The collection was designed to recognize the vital contributions women have made in society throughout history.

The I Am Wonder Woman collection will be featured on Saks’ newly renovated website in “The Edit” section with a shoppable editorial article in which Williams discusses her tennis and design career, when she feels most powerful, and the strong women in her life who inspired the collection.

“Women are the definition of what it means to be a superhero, so I loved designing a collection that was the ultimate elevation of boldness, confidence and strength,” said Williams, founder and chief executive officer of EleVen by Venus Williams. “Designed to be both functional and fashionable, my goal for the EleVen by Venus Williams x Wonder Woman collection is to help motivate women to be their best, happiest and healthiest self in all aspects of their life.”

Williams, 40, who is ranked number 46 by the Women’s Tennis Association, founded EleVen by Venus Williams as a fashion-forward activewear and lifestyle brand creating women’s tennis and everyday apparel. In November, Williams was also named a global ambassador for K-Swiss.

Stephanie Maher, senior vice president, brand marketing at Saks, said she was excited to partner with Warner Bros. and Williams to bring the collection and message to their customers for Women’s History Month. “Saks is committed to using our platform to champion important issues and connect with our customers in meaningful ways. We are excited to bring this exclusive partnership to life in our iconic New York flagship windows and across our digital channels.”

Pam Lifford, president, Warner Bros. global brands, franchises and experiences, added, “Wonder Woman is a source of inspiration the world over. She symbolizes strength, truth, courage, compassion and proof that anything is achievable. Venus Williams embodies these very same qualities, which is why we are so proud of our partnership and this amazing collection.”

Noting that Wonder Woman will celebrate her 80th anniversary this year, Lifford added, “We are pleased  to join with partners like EleVen and Saks that believe in the wonder of her message being more relevant and powerful than ever.”