The department store is pumping up its fast-growing contemporary business. 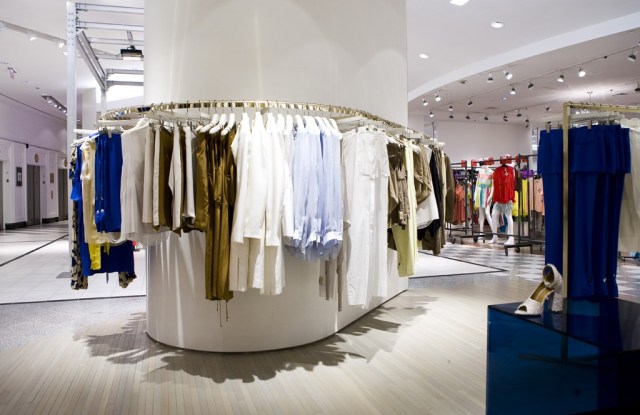 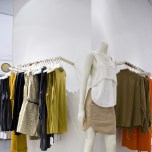 NEW YORK — Saks Fifth Avenue is pumping up its fast-growing contemporary business with an exclusive: the first 3.1 Phillip Lim shop-in-shop.

At Saks’ flagship, Lim will be given windows, a spot on the fifth floor where the elevator opens right into the space, a launch party tonight and an art installation that ties in with the designer’s aesthetic. Japanese artist Nobuhiro Nakanishi, who was introduced to Saks by Lim, has acrylic panels suspended from a trestle in the atrium on five that speak to Lim’s style of classics accentuated with signature design twists. Nakanishi also worked on the Lim windows.

“The two are superclever and putting them together is a very big deal for us,” said Ron Frasch, Saks Inc.’s president and chief merchandising officer. “It just feeds into that whole contemporary business, which is very strong right now,” and becoming increasingly attractive to those who would otherwise shop the designer or bridge floors.

Lim’s shop, which is 825 square feet, including 701 for selling and 124 of fitting rooms, is right across from the Vince shop, which is being renovated and expanded. It’s also near the Workshop, which is a collective of advanced contemporary labels, including Rag & Bone, Alice + Olivia and Helmut Lang, that opened two years ago signaling Saks’ intent to build a bigger contemporary business.

Just prior to the Lim opening, Frasch gave an overview of Saks’ women’s apparel business, which in 2011 generated $1.05 billion, or about 35 percent of the chain’s $3.01 billion in total volume. Women’s apparel represents the biggest chunk of Saks’ revenues and, according to Frasch, it’s up midsingle digits so far this year.

Accessories, a much faster-growing category, generated $580.6 million in sales last year at Saks, or more than 19 percent of the total. Men’s apparel, shoes and accessories, which are also doing well, generated $487.4 million, or 16.2 percent, of the total volume.

Within women’s apparel, the performance at Saks and other retailers can vary widely, depending on the category. “We see businesses either skyrocketing or going in the other direction,” Frasch said.

As he sees it, the most pressing issue in women’s is how customers are shopping differently. “She is very discriminating. She is extremely focused. She has lots of options, and is completely open to shopping alternative retailers other than us to find the right look,” Frasch said. “But business is superstrong where the product is trend right, emotional, sexy and where a woman can buy items from the collection that work back to what she already has in her wardrobe. She wants new. She wants emotional. She wants sexy, and she wants day to night.” And this situation has become “more pronounced in the last six months than we have seen in a long time,” Frasch said. “Women are shopping much smarter and are sensitive to price.”

It’s clear that Frasch is most excited by the contemporary business, which he said is tracking close to 20 percent ahead but is still a smaller business than women’s designer, where Saks has a stronger reputation. “The contemporary business has a collections side to it, a key item side and a denim side,” Frasch explained. “This client is buying color, print and fashion in denim, and then buying a sexy top.” Trendy tops is a strong category, Frasch noted, though he also cited dresses as a standout, in contemporary as well as in bridge and designer. Dresses now represent a “much more significant penetration of the total business,” Frasch said. “Day dresses for work, dinner-oriented dresses, cocktail dresses — all three categories across the board are pretty strong.” Handbags “continues to power forward,” Frasch said. “It’s everything from Chanel to Tory Burch. It’s all of it — not just the top end. It’s consistent throughout as long as the bags are good.”

On the other hand, Saks’ classic apparel is down double digits. “It is really a dichotomy on what’s performing and what’s not performing,” Frasch said. “If you cover the downside with the upside, you can do pretty well.”