Saloni Opens Pop-up in London, a Burst of Bright Color

The temporary space on Sloane Street is the brand's first physical home and will kick off a global series of Saloni pop-ups.

The exterior of the Saloni pop-up store in London.

LONDON — Saloni Lodha has opened her first brick-and-mortar shop on London’s Sloane Street, an airy, colorful pop-up in the space that was once home to Delpozo.

The store, at 134 Sloane Street, will remain open until March 31 and brings to life the brand’s affinity for color and print. Set over two floors and 3,340 square feet, it counts Red Valentino, Chloé and a soon-to-open pop-up from Canadian outerwear brand Mackage as neighbors.

“I wanted there to be space for the clothes to breathe; have it be more of a gallery than a store,” said Lodha, who is known for her vibrant prints and textiles and embroidered, feminine dresses.

The arty atmosphere is underscored by sparsely hung garments: three dresses on one rail, eight on another. The fall 2019 collection, inspired by Lodha’s trips to the mountainous region of Ladakh, in Kashmir, also marks the launch of tailoring in the collection.

The designers worked with brocades featuring motifs from traditional Tibetan Thangka motifs, and has juxtaposed geometric borders with florals, patchwork and Bengal tigers, which Lodha refers to as her “spirit animal.”

There are splashes of color everywhere, including an installation of cloth, in shades of rich red, draped over brass rails in the window. A textile work — in saffron — hangs by the pressed-earth sales counter.

The pop-up is a result of impressive growth for the brand over the last few years, as well as Lodha’s eagerness to market her label. Last year the brand saw year-over-year growth of 62.1 percent and, since 2016, has seen the number of international stockists rise to 199 from 114.

“We are growing really fast and the time has come to communicate all the values of the brand,” she said in an interview.

“I started thinking about where the brand could go on this new journey and I thought there was no better way to communicate it than to have a store. But, as a small brand, to straightaway commit to a full-time store, when we have never done retail, was not something I wanted to do,” said Lodha, adding that in the past she’s preferred to host trunk shows, events and installations in partnership with retailers such as Joyce, Le Bon Marché or Saks Fifth Avenue, or at galleries like the Nilufar Gallery in Milan. 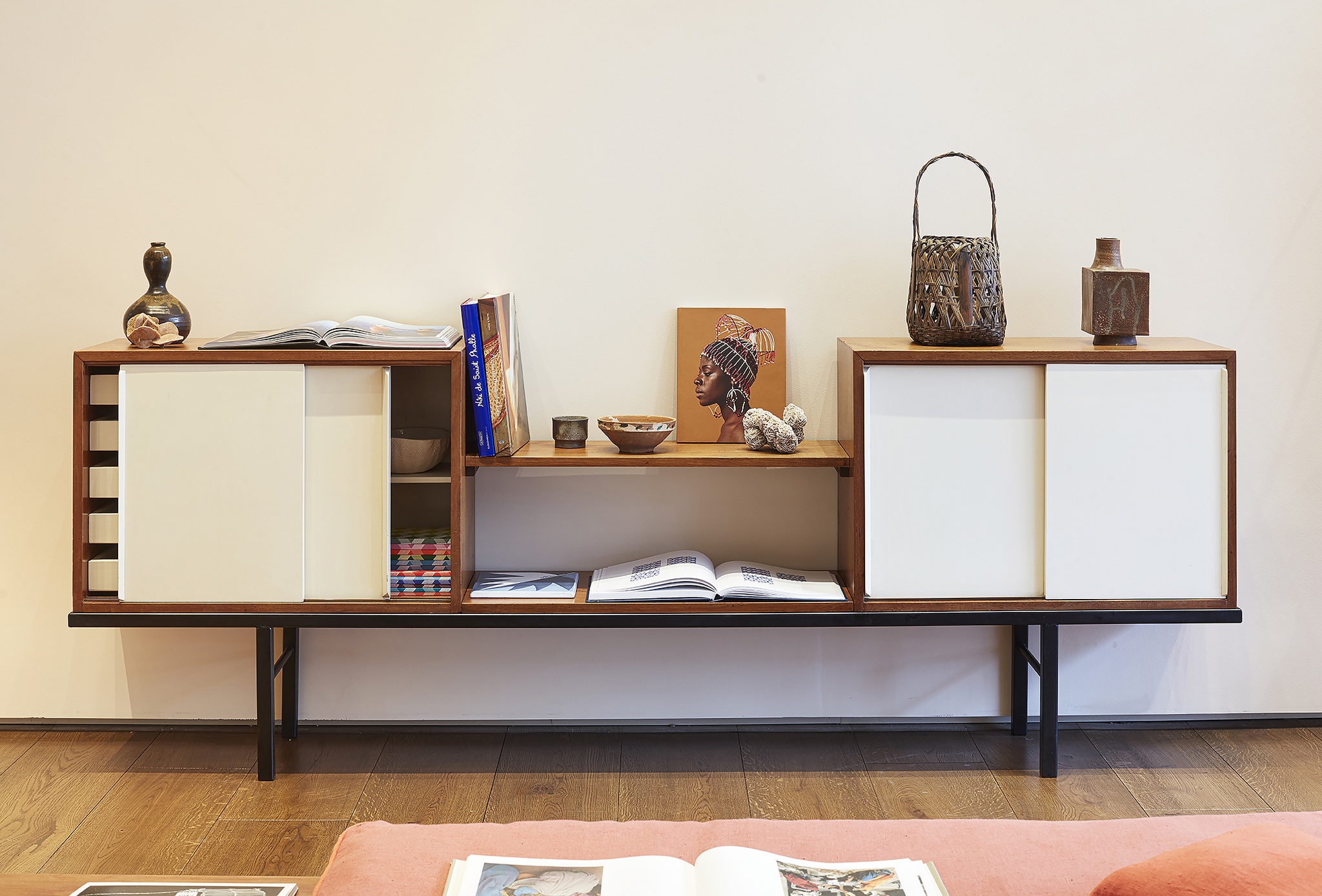 The interior of the Saloni pop-up in London.  Courtesy Photo

The merchandising plan will see the product offering rejigged every six weeks, with the introduction of the brand’s first tailoring pieces in October. The next category she hopes to introduce is swimwear, which will roll out next summer.

Alongside the ready-to-wear pieces are products the designer loves, such as glossy books on art and design, colorful notebooks from Astier de Villatte, or iPhone cables and earbuds from Happy-nes.

Hand-selected pieces of furniture have been dotted throughout, including a pair of wooden chairs by Otto Gerdau, another chair by Cuban designer Clara Porset, a daybed by Ilmari Tapiovaara, and changing room stools by sustainable Italian company Museo della Merda.

The basement will be used as an exhibition and performance space. At the beginning of October, the brand plans to collaborate with a British artist during the Frieze Art Fair, and display antique kimonos sourced from textile collector Pip Rau.

Another customer event will be #SaloniSounds, which Lodha described as a “holistic exploration of sound and dance,” inspired by her habit of sending her team to gong baths.

Mannequins at the rear of the shop showcase pieces from the Saloni archive, which will also be available for purchase.

“Fashion moves fast, but I never think about seasons when I get dressed; I go by what I love, driven by color and comfort,” she said. “A piece of clothing that’s beautifully made should never go out of season. I was brought up in India, where your grandmother passes something to your mother, and then it gets passed on to you, so you look after those things.”

That ethos is a major aspect of her plans to relaunch the brand’s web site — complete with a new logo — with a focus on giving customers advice on caring for the clothes, as well as offering repairs. 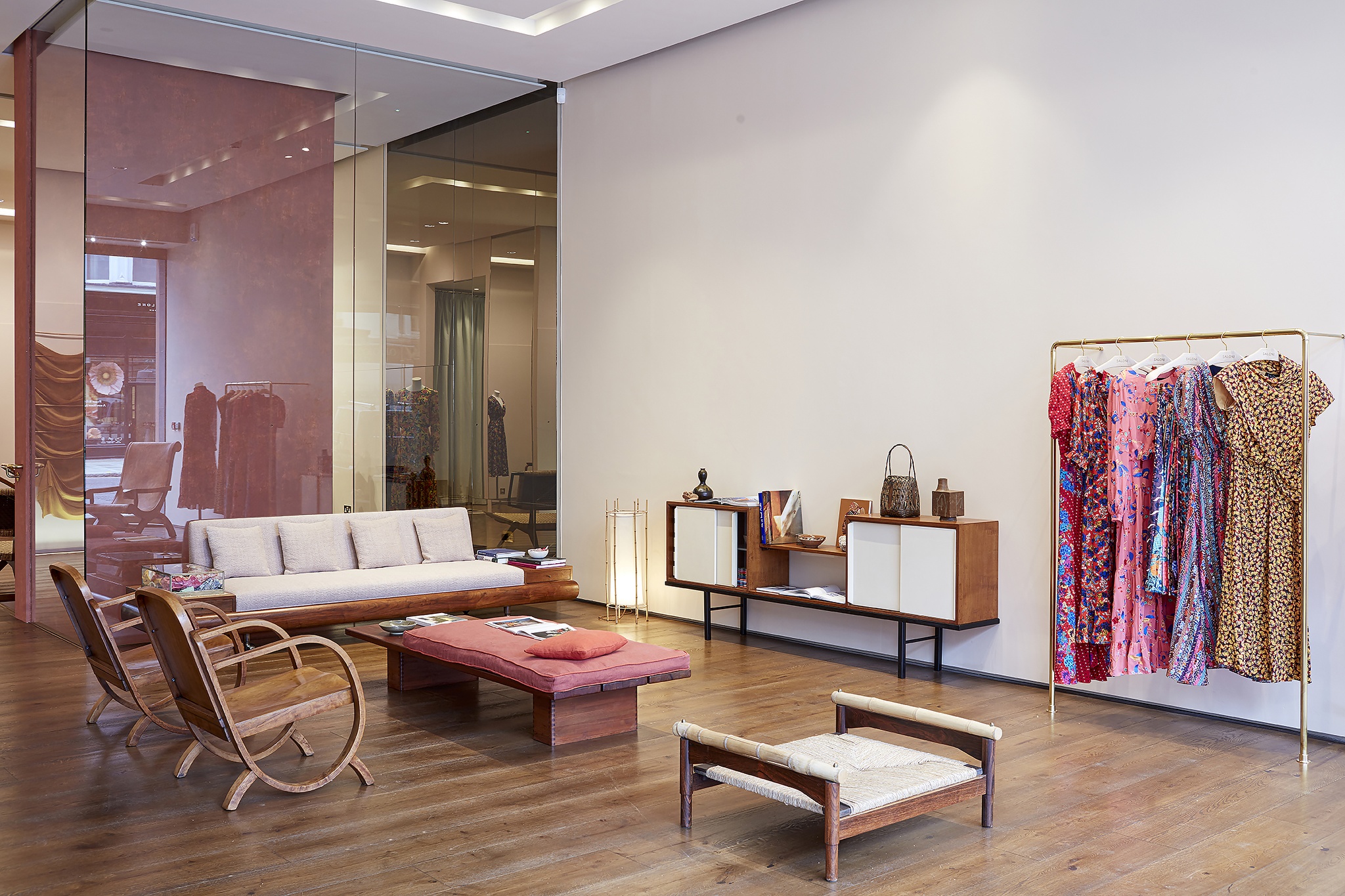 The interior of the Saloni pop-up store in London.  Courtesy Photo

The Sloane Street pop-up is the first in a series that Lodha hopes will lead next to Tokyo. And while there are no plans for a Saloni flagship, when it happens, it will be in London. “London would be my first choice for our first flagship; it feels like home for me,” the Hong Kong-based Lodha admitted. “I have lived in four countries since I started the business, but I feel like I am in transit everywhere else.”