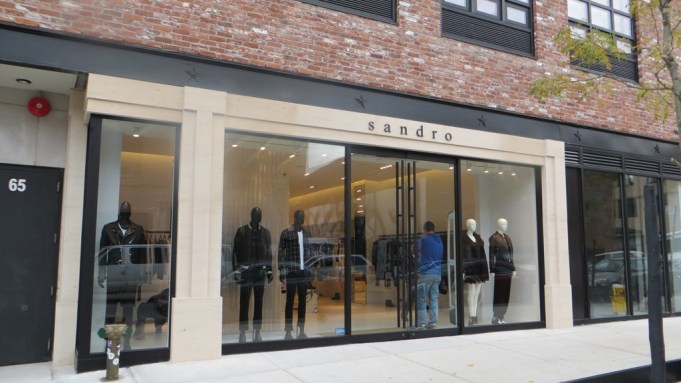 French contemporary retailer Sandro has opened its first Brooklyn outpost, a Williamsburg store that puts a spotlight on its fast-growing men’s business.

Located at 65 North Sixth Street, the 2,100 square-foot unit is situated in a trendy spot that has attracted a cluster of global retailers.

“Williamsburg is a unique mix of art, culture, fashion and cuisine,” said Patrick Valeo, president and chief operating officer of SMCP USA Inc., a unit of Paris-based SMCP Group, which owns the Sandro, Maje and Claudie Pierlot brands. “There is a distinct consumer in Brooklyn that is right for Sandro and we wanted to be part of that scene.”

About 50 percent of the store, which was opened on Oct. 16, is dedicated to men’s wear, compared with the 20 to 30 percent in most Sandro stores. Men’s is merchandised in the front of the store and highlighted in the windows. Sandro men’s wear designer Ilan Chétrite — who is the son of Evelyne Chétrite, cofounder and creative director of the company — was instrumental in choosing the Williamsburg location.

Designed by Bozarthfornell Architecture & Design, the space is fronted by a limestone-and-glass facade and a sleek, minimalist interior with terrazzo floors and marble and Scandinavian wood decor elements. The design is a new concept for Sandro that is friendlier to a men’s aesthetic.

“The Williamsburg man has an intuitive and urban sense of style that easily parallels the Sandro man,” said Valeo. An opening party will be staged tonight, with a performance by the Cults and an installation by graffiti artist Craig Costello, aka Krink.

American Apparel operates a unit down the street and Gant Rugger next month is slated to open a block away. Urban Outfitters is planning to open a concept shop on North Sixth Street, replete with a restaurant, but the local community board earlier this month voted against a requested liquor license for the space.

Amazon on Friday opened a 40,000-square-foot photography facility for its fashion division in the neighborhood.

There are now eight Sandro stores in the U.S., with another six slated to open by yearend: Columbus Circle in New York, Beverly Hills, the Beverly Center in Los Angeles, Palm Beach, Fla., Chicago and the Aventura Mall near Miami.

Outside its own retail network, Sandro operates 27 concession corners in Bloomingdale’s stores. Earlier this spring, it launched its first direct wholesale business in the U.S. with Nordstrom.

In April, private equity firm KKR & Co. acquired a 65 percent stake in SMCP Group from L Capital, adding fuel to the company’s global growth. Sandro has opened 80 freestanding stores and in-store concessions around the world this year. Across its other two brands, SMCP has opened about 90 stores and in-store shops, said Valeo.

SMCP’s business model marries accessible luxury with the best practices of the fast-fashion world, including short collection cycles, quick reaction to global trends and a sharp focus on optimizing the supply chain.