Spain’s venerable retailer retains a sense of its past with a rejuvenated design. 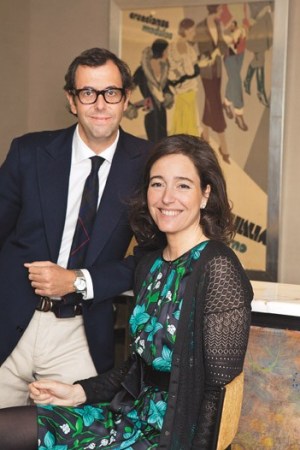 BARCELONA — Santa Eulalia, one of this city’s foremost retailers, has rolled out a revitalized design concept after a two-year, $8.1 million renovation.

This story first appeared in the June 9, 2011 issue of WWD. Subscribe Today.

“We wanted a modern store with roots; to keep our heritage was a priority. We didn’t want to lose the past,” said owner and general manager Luis Sans. His wife and head women’s buyer Sandra Domínguez added, “We needed [to maintain] our soul.”

A family-owned and operated store, Santa Eulalia has occupied a prime corner on Paseo de Gracia, the Catalan capital’s shop-heavy retail artery, since 1944. The retailer dates back to 1843 with two previous locations that merchandised couture and quality fabrics “but the world has changed. There is no money in fabrics, who do you sell them to? And couture was too limited; besides, it’s not the future of retailing. So in the Nineties, we moved into deluxe prêt-a-porter, and that’s how we survived,” Sans said.

The lanky Sans took over the company in 1988. “My father died on a Friday and there I was the following Tuesday sitting at his desk. At 22, it’s not what I thought would happen to me.”

In 2007, Amancio Ortega, founder of Zara parent Inditex, bought and gutted the Paseo de Gracia building, except for the original 19th century facade, to make way for luxury apartments. “We had to negotiate our space,” which stretches over 21,500 square feet on three floors, “but Amancio was very simpatico with us because his mother was a dressmaker and he had a lot of affection for Santa Eulalia and its history,” Sans explained.

“We changed everything so it would look like we hadn’t changed anything. We care more about substance here than image,” he added.

In addition, Domínguez interjected, “We made a big effort to broaden the product mix,” currently a large selection of international high-end and luxury brands for men and women. There are no Spanish labels in the store.

With annual sales of 13 million euros, or $18.5 million at current exchange, men’s categories account for 65 percent of sales and women’s 35 percent, Sans said, adding, “The ideal is 60 percent women’s and 40 percent men’s. The challenge is growing our women’s classifications without decreasing men’s.”

The new design concept had three main objectives. “I wanted something different from other retailers and to bring back the glory with a location that respects our past, so regular customers would recognize their store, along with a budget that wouldn’t ruin the company. To combine the old and the new wasn’t an easy task,” Sans said.

He picked American interior designer William Sofield for the job. “It was destiny. I admired the Gucci stores, Bottega Veneta and Tom Ford too and, to my surprise, they all led back to Bill. I ended up with a very short list of candidates,” he said.

Santa Eulalia was a first for Sofield. “It was a big departure for me, not only my first major project in Spain but my first multibrand store, which presented an interesting challenge because there was no coherent voice in the clothing,” he said. “So I used quite a bit of color like canary yellow, aubergine and deep orange as a way to create harmony when there could have been discord.

“I was astonished by the rich visual history in the company archives,” he added. “In the early Twenties, Santa Eulalia was at the forefront of graphic design — and that pulled me in. As we got further into the project, Luis mentioned a warehouse full of things from the old stores — skylights, brass train racks, doors, hooks, shoehorns. I was like a kid in a candy shop. It was a counterpoint to the modernism and something I could play off. I took old elements like the mahogany staircase from the Forties and curved display cases and wove them together in a new way.”

The downstairs space — with 14 seamstresses and four cutters in a glass-enclosed workshop — caters to bespoke tailoring, traditionally a key service at Santa Eulalia, mainly men’s suits, which retail for upwards of 2,500 euros, or $3,555), and shirts.

Women’s prices range from $119 for an MSGM T-shirt to more than $12,000 for an embellished Rodarte dress.

As for the timing of the remodeling, Sans said he is not afraid of the current domestic meltdown “because luxury will always be out there and the crisis doesn’t prevent our customer from buying a new dress or a new shirt.

“It’s a risk,” he admitted, “but a risk under control. We have a built-in customer base and tourists [they make up 15 percent of sales]. That’s our guarantee.

“The good old days won’t come back, that’s true. They were exaggerated anyway but here the economy is beginning to inch up — and I trust the future.”