Scarlett Johansson admits she's "definitely not athletic in any way," but come spring, she'll be in love with Reebok. 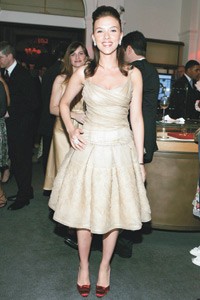 NEW YORK — Scarlett Johansson admits she’s “definitely not athletic in any way,” but come spring, she’ll be in love with Reebok.

The actress has joined with the Canton, Mass., athletic giant to design and market an athletic-inspired sportswear and footwear line called “Scarlett [Hearts] Rbk.”

The partnership is unprecedented for Reebok and the athletic industry, according to Paul Harrington, president and chief executive of Reebok, now a division of Adidas. “This is definitely new and different for us,” Harrington said. “This hits the sweet spot of our major women’s initiative that I announced in April.”

Neither side would disclose too many details of the arrangement, including what Reebok is paying the actress and how the deal is structured, but Herrington said “the deal is in the spirit of a joint venture” and that Johansson — who is involved in every aspect of the line, from designing to appearing in the spring ad campaign — is not an employee. The initial contract is for three years, but is renewable.

Johansson’s line with Reebok will be a lifestyle collection inspired by activewear. Exact looks for the collection have not been made final, but both sides describe the pieces as “fashion forward” as well as retro; retro sneakers and cotton T-shirts will be featured.

“I like to do yoga and stretch out, so we will probably do a bunch of stuff for that,” Johansson told WWD. “Things you can wear to the yoga studio and then to coffee with your friends” — with the emphasis on the coffee part. “I like the idea of exercise and aerobics being glamorous: Olivia Newton John and women exercising in false eyelashes,” she added.

The actress, famously proud of her feminine curves and rear that became renowned in “Lost in Translation,” wants to bring a more feminine cut to her athletic-inspired line. “There is so much pressure to look a certain way and to be thin, and I think part of that comes from fitting into clothing or not fitting into clothing. I am basically designing clothing for my friends, and a lot of my friends are also regular girls with lovely curves and feminine figures.”

Reebok’s other big-name affiliations have included campaigns with actresses Christina Ricci, Lucy Liu and Maggie Gyllenhaal for the “I Am What I Am” ads, and rappers Jay Z, Nelly and 50 Cent, who have footwear collections. Adidas has teamed with Missy Elliott for her Respect M.E. line, and with designers Stella McCartney for Adidas by Stella McCartney and Yohji Yamamoto for Y-3. Both Adidas and Reebok also, of course, sign athletes to promote their products. Adidas, including Reebok, has total sales of $11 billion.

Adidas bought Reebok in January for $3.8 billion, and Adidas executives have said they want the U.S. company to focus on the performance, rather than the lifestyle, side of its business, believing that Reebok has been too susceptible to fashion fads in the past. Reebok is emphasizing its affiliation with the NFL and just signed Peyton Manning, along with other football players, for an upcoming ad campaign.

Harrington defended Reebok’s position in both sides of the activewear market. “When we emphasize performance, it’s not at the expense of lifestyle,” he said. “It’s more about our messaging, which in the past couple of years has probably been too much on lifestyle and music. We feel we can play in both fields.”

And Reebok believes Johansson is the perfect liaison to the lifestyle side. Although she is not an athlete, or even a gym rat, Johansson is “relevant with our consumer — a multidimensional woman with a busy life, an independent spirit and an authentic persona,” Harrington said.

Harrington declined to make volume projections for the line. The company keeps mum on such details, but he added that even Reebok did not know sales projections yet, as distribution channels and wholesale prices have not been made final.

“I don’t think it’s a volume play,” Harrington said. “It’s about how Scarlett attaches to the brand, which affects not just her line.”

Reebok plans to distribute the line at high-end department stores and boutiques in the U.S., Europe and Asia. Deals with specific retailers are still in the works. Harrington hinted prices would be on a par with those of other sportswear lines sold at such stores.

Johansson, who sees her customer base between the ages of 16 and 35, said she wants to keep her line’s price point reasonable. “I want to buy things at affordable prices, especially if it’s a T-shirt,” she said. “What makes Reebok great is, it is all going to be affordable.”

Johansson is not alone in crossing the ranks from actress to designer. Retail sales of licensed celebrity merchandise totaled more than $3 billion last year, according to a report by the trade publication Licensing Letter. Johansson joins the ranks of Beyoncé Knowles, Jessica Simpson, Elizabeth Hurley, Gwen Stefani, Mary Kate and Ashley Olsen, Hilary Duff and Jennifer Lopez. But Johansson is intent on being fully involved with the line and making sure the product is one that represents her.

“I am really wary of that whole persona-in-the-public-eye selling a product,” Johansson said. “I absolutely would never put out a piece of clothing that I wouldn’t wear. It was important to me that I had complete control over the whole project, and Reebok was really open to that.”

Johansson, who says she dresses casually in her private life, is involved in every part of the collection, from designing the line to appearing in the ad campaign that will launch next spring.

“I can draw, but I certainly can’t do sketches that approximate the designs,” she explained. What Johansson can do is rummage through Reebok’s archives — she favors collections from the 1970s — and collaborate with Reebok’s design team to put her ideas to work. “The great thing about working with Reebok is their resources are huge,” she said. “If I find a retro fabric, they can help rework it into something technically right for today.”

The partnership could be called serendipitous. Johansson said she had been looking into designing casual wear when Reebok approached her last summer. “Every time my sister and I went shopping, I couldn’t find T-shirts I liked that fit me,” she said. “I found it more difficult to find a T-shirt I liked that fit me well than an evening gown.”

The deal was brokered by InVenture Entertainment, a New York entertainment marketing company.

When she got the phone call from Reebok, Johansson thought, “It sounded like fun.”

The 21-year-old native New Yorker had her first on-screen break in 1994, in “North,” but gained international acclaim and attention in 2003 with her starring role opposite Bill Murray in Sophia Coppola’s “Lost in Translation.” More recently, Johansson teamed with Woody Allen in “Match Point” in 2005 and in “Scoop,” which hits theaters Wednesday.

In recent years, Johansson has become increasingly present in the fashion industry. She is already a spokesmodel for L’Oréal, and in June she presented the Womenswear Designer of the Year Award to Calvin Klein designer Francisco Costa at the CFDA Fashion Awards. She also socializes with designers, including Costa and Stella McCartney.

This three-year deal with Reebok, which both sides said they are committed to renewing, is satisfying her design bug for now, she said.

Reebok is not looking to sign another name yet either, according to Harrington.

The ad campaign for “Scarlet [Hearts] Rbk” will be part of a larger Reebok global women’s advertising campaign, which debuts next spring. Johansson won’t appear in Reebok’s signature “I am what I am” ads, but the print, and possibly TV, ads in which she will appear will complement that campaign, according to Harrington. The details of the ads, including who will shoot them this fall, are not final.

Reebok is announcing the Johansson collaboration tonight with an exclusive party at Xchange here.