A few spots for relaxing, dining, shopping and appreciating culture during collections.

BABY BOOM: Celesta, a trendy new boutique in the Marais, believes a taste for fashion starts early: from newborns to age eight. “The... 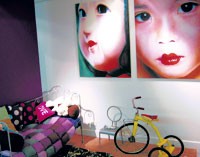 A few spots for relaxing, dining, shopping and appreciating culture during collections.

BABY BOOM: Celesta, a trendy new boutique in the Marais, believes a taste for fashion starts early: from newborns to age eight. “The [children’s retail] market in Paris needed a trendy multibrand store for infants,” said owner Marlène Pellici, who also designs a small collection of her own. Up-and-coming European labels such as Pilar, Rita Co Rita, Simple Kids, Essentiel and Maan are among the upscale brands on offer. The 3,000-square-foot emporium also sells toys and is equipped with giant televisions blasting nonstop cartoons to keep the kiddies occupied. Meanwhile, the Left Bank also has a new addition for new additions: Serendipity specializes in designer furniture and decorations for toddlers.
Celesta: 23 Rue Debelleyme, 331-42-72-15-59;
Serendipity: 17 Rue des Quatre-Vents, 331-40-46-01-15.

ARTFUL ABUNDANCE: Fall is a feast for art lovers in Paris. Besides a round of blockbuster museum shows — including the Modern Art Museum’s exhibition of Maurizio Cattelan in the chapel at the Beaux-Arts and the Veronese show at the Luxembourg Museum — Pierre et Gilles are showing new work at the Emanuel de Noirmont gallery, and the Bernadette Corp. is making the transition from fashion to art at Yvon Lambert, who is also featuring Jenny Holzer. More fashion crossover acts include Hedi Slimane, whose photos of rock concerts are on display at Galerie Almine Rech, and Frank Perrin, the founder of Crash magazine, who will show pictures of the runway juxtaposed with joggers at Jousse Enterprise. Over at the Pompidou Center, French artist Xavier Veilhan is exhibiting his striking “light machines” and installations in his first solo show. Concurrently, the Pompidou has “Sound and Light,” exploring those themes with works by Pierre Huyghes, Bill Viola and Bruce Nauman. Also notable are Chinese artist Wong Du’s installations, on view at the Palais de Tokyo.

AT THE SAVOY: Guy Savoy, the beloved three-star chef, strikes again with Le Chiberta, a chic new bistro. Designer Jean-Michel Wilmotte created a predominantly black decor, with a large Bertrand Lavier painting in one dining room and a red Gérard Traquandi in the other. Whether starting with vichyssoise with watercress or egg in a vegetable and mushroom aspic, the mouth waters. And it gets better with John Dory fish with tomatoes, leeks and melted parmesan, or Espelette pepper pigeon with tender string beans. And anyone could just melt for the praline chocolate fondant.
Le Chiberta: 3 Rue Arsène Houssaye, 331-53-53-42-00.

PAST PRESENT: Fashion icons never die in France; they get the museum treatment. At least, that’s the case with Sylvie Vartan, the pop chanteuse who first gained popularity in the Sixties. The Galliera museum of fashion has organized an exhibition around the evolution of Vartan’s style, including her wedding gown for her marriage to former husband Johnny Hallyday, France’s answer to Elvis. The show, which runs Oct. 14 to Feb. 27, corresponds with Vartan’s revival tour, for which Chanel’s Karl Lagerfeld has whipped up her costumes.
Galleria: 10 Avenue Pierre 1er de Serbie;
33-156-52-86-00.

SERS AND HIS: Paris’ “golden triangle” has gained another exclusive four-star hotel. Situated off Avenue George V, what used to be the Marquis de Sers Hotel received an overhaul to restore 19th-century details, but within an overall contemporary scheme. French architect Thomas Vidalenc mixes modern and classic styles, and the 52 rooms and six suites are all bright and spacious. A majestic staircase leads to a bar with a restored marble fireplace and parquet floor, while a long gallery leads to the restaurant and a courtyard. Standard rooms start at $480, while a breathtaking panoramic suite goes for $1,300.
Hotel de Sers: 41 Avenue Pierre 1er de Serbie, 331-53-2375-75.