They will give the trendy retailer a total of... 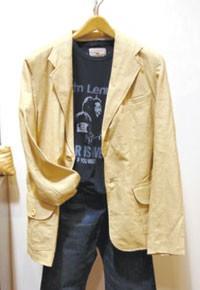 They will give the trendy retailer a total of 10,000 square feet along Washington Street between 13th and 14th Streets. The new brand-building ventures will join Scoop’s women’s and men’s stores on Washington.

In addition, the retailer plans a 9,800-square-foot lifestyle “superstore” in Chicago this fall and a Palm Beach, Fla., boutique by year’s end. Greenfield said she also is scouting the Southwest for two locations to open in 2006. Scoop unveiled its third shop in East Hampton, N.Y., last month.

Denim will account for about 40 percent of the 4,000-square-foot store set to open in October. And the niche will be novelty: One-of-a-kind embroidered, embellished denim from Seven For All Mankind and Great China Wall, reconstructed Levi’s from the Sixties and Seventies from Los Angeles’ Denim Doctors and navy Beatles T-shirts adorned with Swarovski crystals from Trunk.

“If Scoop is the ultimate closet, Scoop Street is the ultimate attic with your favorite items you’ll have forever,” Greenfield said. “It’s a ‘Do you remember?’ store. We’ve taken inspiration from the past. Think Steve McQueen. This is our opportunity to redefine casual,” she said.

Scoop’s uptown store at 1275 Third Avenue in Manhattan already has a 300-square-foot space dedicated to denim called Scoop Street. “You could say it’s an extension of that area, because it’s jeans … but this is a new concept,” Greenfield said, noting that the new Scoop Street’s inventory will be 100 percent different from any other Scoop location.

For example, Scoop Street will feature embroidered Western shirts and wrap skirts from What Comes Around Goes Around for Scoop, and Scoop’s private line may take a modern spin on the Irish- or Aran-style sweaters worn in “Love Story,” Greenfield said.

Visitors to the two-level store will find the same stainless steel and polished concrete aesthetic as other Scoop boutiques. Greenfield said Scoop Street may have more of a Los Angeles feel, combining vintage with a bit of rock ‘n’ roll, “but we’ll take off the rough edges,” she added.

The Los Angeles connection is no fluke as Greenfield hopes to take a cue from Fred Segal in attempting to build her own Scoop lifestyle brand. “Fred Segal does it so great in L.A.,” she said. “This is another way for Scoop to capitalize on another part of lifestyle.”

By 2007, Greenfield plans to bring Scoop Street to three or four new locations, either through introducing the concept into larger existing Scoop boutiques or through opening freestanding stores. Currently, Scoop operates 11 locations, where sales average at least $1,500 a square foot, Greenfield said.

Attempting to create a new niche is a natural extension for successful retailers that fear stagnation, said Dana Telsey, retail analyst for Bear Stearns. “They reach the limit in the core concept,” Telsey said. Some specialty stores, which have catered to the high school-college market, are looking to what Telsey called the Gen-Y Grad, the post-college to 35-year-old consumer seeking more cutting-edge fashion than that found at department stores.

To meet that need, retailers must refashion themselves or extend their brands. “You’ll see many new concepts over the next couple of years,” Telsey said, noting that successful spin-offs must present differentiated merchandise.

Scoop Street appears to be doing just that with its custom denim from Seven retailing for $495 to $995 and its custom Trunk Swarovski crystal concert shirts for $300. “That’s differentiated stuff,” Telsey said. “That’s interesting. People are looking for unique points of view.”