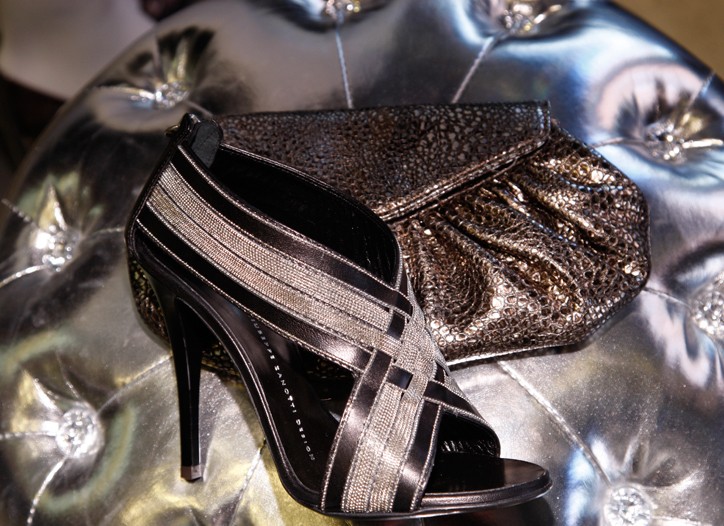 NEW YORK — Scoop has converted its clearance space at 875 Washington Street here into a “swing shop” that will change its merchandise concept six times a year like a fashion chameleon.

The 770-square-foot boutique, formerly called Scoop It Up, is now known as Scoop After Dark, reflecting the array of evening dresses, sequin skirts and blouses and festive jewelry, shoes and accessories.

Yet that could be a temporary moniker since by the end of January, the shop will have a different persona. It could morph into a showcase for a handful of young, emerging designers, or something else. “Open-see” days, an opportunity for designers who may never have been seen by Scoop buyers to show their lines and potentially get an order, are in the works. Or when the weather gets warmer, the shop could be called Scoop Beach, or possibly a spring version of After Dark. It’s to be determined.

“This space has turned into a little gem,” said Susan Davidson, the president and chief executive officer of the 14-unit Scoop contemporary specialty chain. “We’ll take what we learn here and use that information to create outposts in our bigger locations.”

As far as what the next merchandise will be come January, Davidson said she’s not ready to commit yet, though she’s aware time is running short.

In the meantime, the assortment includes, on the lower-priced side, such items as $225 Vera Wang rhinestone mesh necklaces and $500 Alice & Olivia dresses. On the higher-priced side, there is an $1,095 Erickson Beamon multistrand pearl-faux gem necklace as well as Roberto Cavalli dresses up to $1,800. Generally, clothing prices are from $400 to $1,000; jewelry, $200 to around $1,600.

Scoop After Dark is situated between 13th and 14th Streets in the West Village and on the same block as three other Scoop units; Scoop NYC for women’s, Scoop Men’s, and Scoop Active, which also now houses the clearance merchandise on its lower level. With less inventory chainwide, there are fewer items to be marked down so the sale merchandise can be played down. Like other retailers, Scoop is trying to wean shoppers off markdowns and obtain more transactions at regular prices.

Since joining Scoop in September, after running the now-defunct Creative Design Studios division of NRDC, Davidson has been evolving the presentation by enhancing the windows and decor with more mannequins, decorative touches and furniture. She also made some key hires to support the efforts, recruiting Barbara Putnam, formerly with Burberry, as vice president of visual merchandising and marketing. Alan Rohwer is working as a consultant to assist Putnam.

Scoop, which was acquired by Ron Burkle’s Yucaipa in 2007, has seen its share of tough times since then, given the recession and the departures of founder Stefani Greenfield and former Scoop ceo Melanie Cox, providing the opportunity for Davidson.

“I don’t want to change what the Scoop brand stands for,” said Davidson. “I want it to evolve and stay true to its customer. It’s modern, fun, feminine and fashionable.”