The brand also continues to expand its retail footprint in North America under ceo Ari Hoffman.

NEW YORK — It’s not just women who should have the option to rent, return and refresh their wardrobes. At least according to Scotch & Soda, which is doing its part to give men the same opportunity.

The Amsterdam-based apparel brand in September will introduce Scotch Select, which it believes to be the first men’s subscription rental program. Women’s companies, including Ann Taylor, Express, Vince and New York & Co., all offer a similar program for female customers.

All of these brands as well as Scotch & Soda are using the CaaStle technology platform to power their initiatives.

“With all the new formats and models out there, it’s important to stay on top and keep moving forward,” said Ari Hoffman, chief executive officer of Scotch & Soda North America. “Young people don’t want to own things — that’s the way the world is going.” 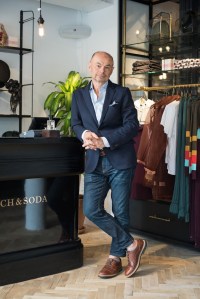 He said Scotch & Soda works with Rent the Runway in women’s, but this is its first foray into men’s. “It’s become a proven success in women’s, but what about men? They care about fashion just as much today, so we decided to go with it.” Scotch & Soda’s sales are 62 percent men’s and 38 percent women’s.

The way it works is that a customer will pay $99 a month and can rent up to three items of apparel for as long as they want. The price includes shipping and dry-cleaning costs. If they choose to buy it, they can, if not, they can simply return it to Scotch & Soda and get something else. “It’s an easier way to finance their fashion thirst,” he said.

Hoffman said the brand decided to work with CaaStle instead of doing it solo because “one challenging part of the subscription rental model is dry cleaning. Rent the Runway is the world’s largest dry cleaner, but that’s not what we do. This way, CaaStle handles all the cleaning and repairing.”

At the start, the men’s rental subscription model will be available only in the U.S., but Hoffman said “we’re keeping our eyes open for Europe as well. We just need to find the right partner there.”

The men‘s rental program is just one of the strategies Scotch & Soda has been employing as it continues to expand its reach in the North American market.

It now operates 40 stores in the U.S. and has added eight units in the past year alone. Hoffman revealed that this fall, it will open a unit in American Dream, the 3 million-square-foot entertainment and shopping center that is nearing completion in East Rutherford, N.J.

Although Scotch & Soda will choose street level locations whenever possible, “we decided to be part of that opening,” Hoffman said. “It’s not the most obvious decision, but the trigger for us is that while most malls are struggling to transform themselves by adding experiences, American Dream will be the first mall built from the ground up with that concept.”

The center, whose developers are projecting it will become the highest-grossing center in North America with sales per square foot in excess of $2,000, will include an indoor ski slope, water parks, an aquarium, ice rink, miniature golf course and performing arts theater.

In addition to American Dream, Scotch & Soda will open stores this fall in Atlanta’s Lenox Square mall, as well as in Austin, Tex. The Austin unit will mark the brand’s third Texas store, joining the recently opened Dallas and Houston locations.

“Our strategy is more of a cluster approach,” Hoffman said, noting that the New York City market has eight stores, while San Francisco, Los Angeles and Miami all have three. “That way you can leverage marketing and human capital.”

One of the most recent additions was a store on Orchard Street on the Lower East Side, which opened in April. Hoffman said he chose the location on the corner of Broome Street, because the neighborhood is becoming popular with young people. “It’s such a storied street,” he said. “It was the original outlet location and now there are more boutiques and restaurants.” Scotch & Soda is among the first international retailers to sign on. “Our customers don’t like to go uptown,” he said, pointing to the success of both the new Orchard Street store as well as its two locations in Brooklyn.

“The DUMBO store has been a huge success,” Hoffman said of the 2,500-square-foot unit that opened at the end of 2017 on Front Street in Brooklyn. “It has doubled our projections.”

Overall, Hoffman said the company’s own retail accounts for around 55 percent of overall sales with e-commerce adding another 15 percent and wholesale the remaining 30 percent.

“When people say retail is dead, it’s really because of the difference between big box and specialty retail,” he said. “We’ve never tried to build museums to show how big and fabulous we are. We’re humble and nimble and the stores are the right size for our business’s operating costs. All of them are financially successful.”

He said Scotch & Soda uses demographic and e-commerce data to determine where to open stores. “When I started here five years ago, there were only two stores in New York. Now we have eight,” he said. “Is it too much? No. Each store has grown organically and the overlap in a market stimulates the customer to buy because they see the brand more often.”

In terms of wholesale, while its percentage to the overall business is lower than the company’s own retail, it’s still considered an essential part of the business. Hoffman said “one of the best-performing men’s contemporary brands” at Bloomingdale’s and Nordstrom and was recently added at Neiman Marcus. “Our wholesale channel is growing as well,” he said.

Scotch & Soda’s contemporary men’s, women’s and children’s collection offers a “uniquely Dutch” aesthetic, he said, and caters to a wide range of customers, although the sweet spot is men and women in their mid-30s. “We don’t take ourselves too seriously,” he said. “We say our brand is Amsterdam Couture, which is light and fun. We have a strong point of view and people either love us or don’t get us.”

For the past eight years, Scotch & Soda has been owned by Sun Capital Partners, a private equity firm. Hoffman said the owners “have been very supportive of our growth” and he’s not expecting them to cash out anytime soon.

In fact, on Sept. 1, the corporation will bring a new ceo on board when longtime Stella McCartney executive Frederick Lukoff joins the brand, replacing Dirk-Jan Stoppelenburg. Hoffman said he hasn’t met the incoming executive yet, but is excited by the fact that he is coming from a “high-image brand and high aesthetic is important to us.”