NEW YORK —Yet another high-end fashion retailer has moved into SoHo but this time around, it’s not an international luxury house.

Last month, new belt firm Scott Mallory set up shop in what was half of shoemaker Charles... 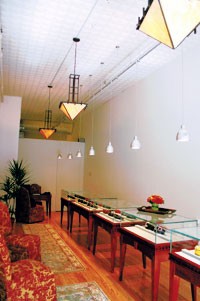 NEW YORK —Yet another high-end fashion retailer has moved into SoHo but this time around, it’s not an international luxury house.

Last month, new belt firm Scott Mallory set up shop in what was half of shoemaker Charles Jourdan’s space on Spring Street.

Owned by Howard Scott Goldsmith and his wife, Susan, and named for their daughter, Mallory, the company manufactures luxury belts in exotic skins and buckles with semiprecious and precious stones. The 650-square-foot boutique is the brand’s first foray into the marketplace.

For 10 years, the couple, who split their time between Boca Raton, Fla., and New York, owned a number of Polo Ralph Lauren stores in Princeton and Riverside Square, N.J. After Lauren began to reclaim his franchised properties, including the Goldsmith’s store in 1989, they eventually decided to take a cue from their personal lives and follow their passions for fine living and, well, belts, of which Susan Goldsmith had amassed a sizable collection.

Scott Mallory belts come in alligator, crocodile, stingray and ostrich, and buckles are made of silver, white and yellow gold. Produced in a jewelry factory, the buckles are detailed with white and black diamonds and pink and yellow sapphires. Some buckles are unisex while others appeal directly to women. Such exclusive materials don’t come cheap — sold separately, the pieces retail from $365 to $38,000. The priciest item is a half-moon-shaped buckle in 18-karat white gold with 11 carats of diamonds.

While European luxury firms are no strangers to SoHo, critics might question how long a store devoted to thousand-dollar Western-influenced belts will last downtown. The bulk of sales for some luxury brands in the area come from lower-priced accessories. Other firms less fortunate have decided to move out altogether, such as Salvatore Ferragamo, which recently announced its store on Spring Street is being openly marketed.

Yet Goldsmith insists his products fit right in with the high-low wave sweeping fashion these days, such as the appeal of wearing a Prada skirt with a T-shirt from Target.

Goldsmith also envisions his belts as ways to dress up a basic pair of black pants for an evening out. “There aren’t that many cowboys in New York,” he admitted. “But there are smartly and finely dressed people who wear slacks and suits and ties, so we felt it was important to address that need.”

That said, most of the slacks-and-suit crowd live uptown, so why choose to open the first store below 14th Street? “We do think the Madison Avenue crowd is probably the perfect crowd [for our product] but we think that they visit SoHo as a destination,” he said. “They come here on a mission to shop.”

Goldsmith anticipates the outlet will do $1.5 million in volume within the first year. Regardless of its success, however, he remains hesitant about jumping into the wholesale arena, so he has no intentions to sell Scott Mallory merchandise to department or specialty stores in the future. “Wholesale would be a way for us to enhance visibility of the brand, that’s the temptation,” he said. “But the temptation isn’t to sell more pieces. Our mission is expression, quality and exclusivity.”