The Entireworld pop-up at Nordstrom.

Entrepreneurship is part of Scott Sternberg’s DNA. So it’s no surprise that after his Band of Outsiders brand was shuttered in 2015, he would eventually find his way back to fashion.

Sternberg created Entireworld, a men’s and women’s wardrobe essentials collection, just under two years ago and the brand will make its first appearance at a brick-and-mortar retail store when Nordstrom unveils Concept 008: Entireworld at its men’s store in New York City on Thursday morning.

Up until now, Entireworld has only been sold direct-to-consumer on the brand’s web site as well as on a few others, including Mr Porter and Goop, Sternberg said. But when Nordstrom approached him about bringing the brand to its stores, Sternberg jumped at the chance.

“It’s an incredible opportunity,” he said. “We’re a home-grown start-up brand financed through individual investors, so we’ve slowly been building it step by step.”

The exposure gained by being carried at eight Nordstrom stores and online will help bring Entireworld to a whole new audience, he believes.

“Nordstrom is a dream channel partner for us,” said Sternberg, “embracing our idiosyncrasies, amplifying our unique brand message and visual language, and putting our product in the hands of a loyal customer in the context of the incredible mix of brands found in their stores.”

That’s what attracted Sam Lobban, vice president of designer ready-to-wear and new concepts for Nordstrom, to the brand in the first place.

“New Concepts has always been about discovery,” Lobban said. “Introducing Entireworld to new audiences across the country with physical buildouts designed in collaboration with Scott in each store brings the brand to life, reinforcing that sense of discovery through retail.”

Lobban said he first became aware of Entireworld even before it launched and was immediately intrigued. “I’ve always been a fan of Scott and his take on product,” he said. He pointed to the Entireworld’s unique take on “familiar American sportswear and the nuances that make it feel interesting and fresh.

“I liked what he did at Band of Outsiders, his view on clothing and style and the way be puts together brands and his overall creativity and art direction,” Lobban added.

He also likes the price points. Entireworld offers an array of responsibly made essentials ranging from beanies, socks and underwear to sweaters, raglan shirts and trousers — all of which retail for under $200.

“The level of thought that he put into creating a collection at that price point is very compelling, especially for a younger customer,” Lobban said.

Sternberg characterized himself as “quite entrepreneurial” and said, “It’s in my bones to start companies.” Although he realized that it wouldn’t be easy with the retail and media industries in flux, he said he was nonetheless “attracted by the challenge.”

“Band of Outsiders was started out of my house with my own bank account,” he said, adding that he knew nothing about making clothes when creating that brand in 2004. But armed with that success, the CFDA-winning designer and photographer felt much more comfortable when launching Entireworld.

The collection being sold at Nordstrom, while housed in the men’s stores, will include a women’s assortment as well. Although the Concept shops have offered women’s wear in the past, from Patagonia and others, this marks the first time a full women’s assortment will be carried. 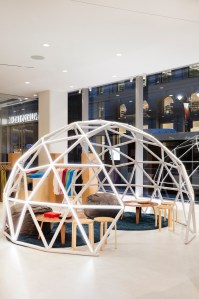 The Concept 008: Entireworld shop was created by founder Scott Sternberg and the Nordstrom team.

“This is not a conscious leap into women’s wear, but it’s important to tell the brand story, and the brand is pretty gender fluid,” Lobban said. “So it made sense to offer both.”

Sternberg also created some exclusive colors in sweats, T-shirts and underwear for the Nordstrom mix to differentiate what is being sold there from the brand’s other distribution channels. “It should feel fresh,” he said of the line, which he described as “not anti-seasonal,” but instead encompasses a core collection of product “refreshed by color” on a seasonal basis.

Top sellers for the brand include a pleated men’s trouser and the men’s underwear, socks and T-shirts, as well as a women’s sweatshirt that Sternberg said was introduced last fall and he “cannot keep in stock.”

As a direct-to-consumer brand, Sternberg is eager to get his collection in front of some new customers to they can actually touch and feel it for the first time.

But Sternberg said that while he’ll entertain offers from retailers to buy from the existing inventory he has no intention of embracing the traditional wholesale model. “We’ll use our platform to reach new customers,” he said.

In addition to New York, Entireworld will be sold at Nordstrom’s downtown Seattle flagship, The Grove in Los Angeles, Aventura Mall in Miami, South Coast Plaza in Costa Mesa, Calif., Michigan Avenue in Chicago, NorthPark Center in Dallas and Pacific Centre in Vancouver, B.C. It will also be available online through March 8.