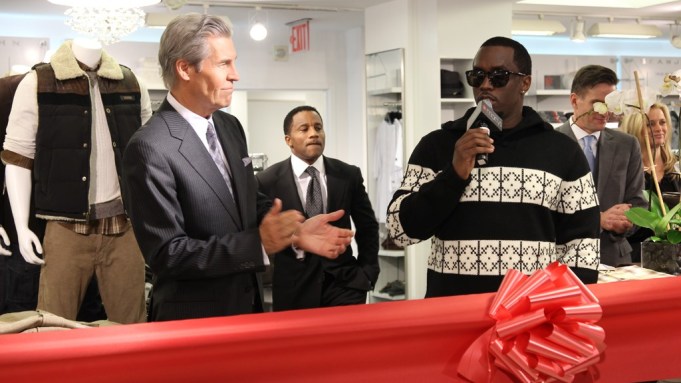 The rollout began Tuesday when Sean “Diddy” Combs and Terry Lundgren opened a sleek new 2,000 square-foot Sean John men’s shop at Macy’s Herald Square. The new space, situated in a prime, central pad on the denim and contemporary men’s floor, replaces an older 1,500-square-foot shop that was tucked away in a corner location.

Separately, Sean John has signed a deal to outsource operation of its own retail stores to a new entity, SJ Retail LLC, a company formed by Bob Hyde, the former head of retail operations at Crocs.

“It’s a vote of confidence in Sean John,” said Lundgren, chairman and chief executive officer of Macy’s Inc., at the ribbon-cutting ceremony of the new shop. “Our business is already very good but we think we can take it to a whole new level. We spent the past five months on the design and architecture and technology attached to it. We are going to let the customer experience it, see how they like it and roll it out to additional stores.”

The brightly lit shop features lustrous white fixtures and showcases sportswear and accessories, with a dedicated area for denim. An interactive 46-inch touch screen video display allows customers to search for and shop additional Sean John product on macys.com and seanjohn.com, as well as watch videos and access Facebook and Twitter.

Another 790-square-foot shop using the same concept opened in the Macy’s Union Square flagship in San Francisco last month, with 10 more shops slated to be installed in key Macy’s doors in 2012.

“We are evolving and have grown so much over the past 13 years and the proof is in the shop and the sophistication of it,” said Combs, founder of Sean John. “Everyone in the industry went through a rough time [during the recession] and we made it through the storm. Now things are going up and improving every week and every month. Between our new relationships with Macy’s and with Li & Fung, we are in the rhythm now. We have our fit right, the production is right, our deliveries are on time and everything is good.”

Combs is currently appearing in a television advertising campaign for Macy’s along with other marquee names that have inked exclusives with the department store, including Tommy Hilfiger, Martha Stewart and Rachel Roy.

The license deal with SJ Retail, slated to close on Nov. 1, continues Sean John’s strategy of finding partners to manage and oversee its businesses. Hyde created SJ Retail with backing from a group of silent investors that he declined to name.

There are currently eight Sean John outlet stores that SJ Retail will acquire the leases to, along with the existing inventory. The stores are located in New Jersey, Pennsylvania, Georgia, Florida, Nevada and California.

One full-price airport store located in Atlanta’s Harts-field-Jackson airport is not part of the deal with SJ Retail.

“I’ve always been a fan of P. Diddy and I think he’s done an exceptional job of managing the brand. This is a great opportunity to establish my own retail entity,” said Hyde, president and managing director of SJ Retail.

The 20-year contract with Sean John stipulates that SJ Retail open three stores a year over the next 10 years.

“We’re going to take the first few months and shore up the infrastructure of the retail operations and make sure the existing locations are running effectively,” said Hyde. “There are some operational opportunities to improve the business. We are going to look at the merchandise assortments and align them with consumer demand as well as the in-store marketing and the visual layouts.”

SJ Retail is currently headquartered in Boulder, Colo., where Hyde is based and runs a part-time consulting firm. Hyde joined Crocs in 2006, immediately following the company’s initial public offering. Crocs had no stores at the time and he helped oversee retail growth to over 300 stores as senior director of retail by the time he left the company in December.

“We think there is a big opportunity not only in outlets but in regular-price retail,” said Jeff Tweedy, executive vice president at Sean John. “We thought the best thing to do was to partner with people who are experts at it.”

Sean John shuttered its sole full-price store at 475 Fifth Avenue in Manhattan at the end of last year, a 3,500-square-foot flagship that was opened in 2004.

Sean John’s primary focus now is overseeing its 20 licenses and marketing the brand, said Tweedy. Key initiatives now are to expand the women’s business into handbags and accessories and build on the juniors line licensed to Icer Brands, women’s outerwear licensed to G-III Apparel Group Ltd. and women’s fragrances licensed to the Estée Lauder Cos. Inc.