It's taken a while, but there are signs the brand might finally be figuring out the right formula for its women's wear. 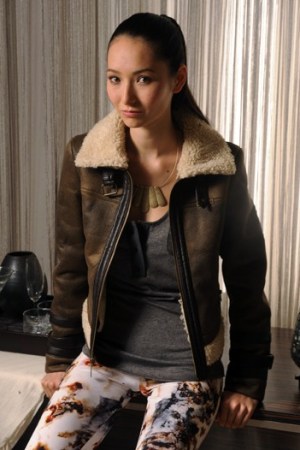 NEW YORK — Sean John has tried numerous times to get its women’s sportswear off the ground, but has hit roadblocks along the way. Now, with a licensing arrangement with Icer Brands Inc. here, the brand’s women’s business is starting to gain some traction.

Launched by Icer as an activewear line for holiday 2010, Sean John evolved into a young contemporary collection for spring 2011, and has been having some positive results. For fall and holiday 2011, the line has been broadened to include fashionable tops, dresses, pants, leggings, blazers and denim. “We were looking for the right partner and wanted to do it small and do it right,” said Jeffrey Tweedy, executive vice president of Sean John, which was founded in 1998.

Although Sean John became a successful brand in men’s wear, it was never really able to get its women’s act together. After postponing a much-anticipated women’s launch several times, the company introduced a contemporary line, Sean by Sean Combs, in 2005, but abruptly closed it in March 2006. A Sean John junior line was licensed to G-III Apparel Group Ltd. in 2006, but was terminated two years later. Sean John then took the junior business in-house. In 2008, Sean “Diddy” Combs, the company’s founder, told WWD: “We are in discussions with other potential partners to do the women’s line. The women’s business is the craziest business in the world and it’s been hard for us to get out of the gate, but we’ll get there. When we do, it’s going to be big.”

The line is targeted at an 18- to 25-year-old woman who enjoys fashion. “It’s young, hip and aspirational and all the things we’ve built the [Sean John] brand on,” said Tweedy. He said the line is no longer considered an “urban” collection, but is targeted to everybody.

“Activewear was a great hook. It was a nice platform to shout [from] that ‘we’re back,’” said Ed Coll, chief operating officer of Icer. “Now it’s a more contemporary dress-up look, and it’s been very successful.”

Designing the young contemporary collection for Icer are twin brothers Glenn and Bruce Proctor, whom Tweedy befriended several years ago when they were seeking a mentor. The twins previously worked at American Rag, and joined Icer seven months ago to design the Sean John women’s line. Ingrid Estevez is the merchandise manager.

Sean John has an exclusive arrangement with Macy’s Inc. for its men’s wear, but the women’s line isn’t under the same arrangement. While Macy’s represents the bulk of the women’s business, the line is also available at 50 to 60 specialty stores and Web sites, such as Man Alive and DrJays.com, according to Coll. Obviously, it is difficult for other department stores to be interested in carrying the young contemporary line since they’re unable to carry the men’s sportswear because of the Macy’s exclusive deal. But Coll said with the line’s new direction, they are going after other department stores as well.

“We’re working on an entire marketing plan for the brand,” said Tweedy. The firm is using Blue Flame Marketing, owned by Combs, which will handle TV, print and social networking.

Martine Reardon, executive vice president of marketing and advertising at Macy’s, said, “We are pretty excited about bringing the Sean John name again to our youth customer. It’s been missing in this space for us, and we’re excited about what we saw for fall and holiday.” She said she expects Macy’s will carry the line for fall in 100 of its doors. “We want to do a ramp-up strategically,” she said.

For fall, Sean John’s women’s collection retails from $39 for a T-shirt to $98 for a sportswear jacket. The outerwear, licensed to G-III, retails from $79 to $125. Tweedy said he expects the Sean John women’s sportswear and outerwear to achieve $30 million in wholesale volume this year. The men’s wear line is expected to drum up more than $250 million in retail sales at Macy’s this year.

“I have always known there was tremendous desire for a women’s collection from Sean John, and now that we have this team of ambitious young talent in place, everything is in order,” said Combs.

Tweedy views international business as an opportunity for the women’s sportswear over the next several months. “We’re making headway with the U.K. market and are exploring Dubai, South Africa and Asia,” he said, noting he’s looking for a distributor or licensing deals in those areas. Besides sportswear, Sean John has licenses for women’s outerwear, eyewear and fragrances, and a new fragrance is in the works. “We’re exploring footwear, accessories and handbags through licensing,” said Tweedy. Opening freestanding stores isn’t a priority for the women’s collection right now. “We want to make sure we have our masterbrand and licensees done correctly before we get into our own retail again,” said Tweedy. The company closed its 2,800-square-foot store on Fifth Avenue here, and is looking for new space for the men’s wear. “It was just too small,” said Tweedy. The company has nine outlet stores.

In 2003, California billionaire Ron Burkle invested $100 million in Sean John’s business, with the aim of turning Sean John into a global, billion-dollar brand. The infusion of capital was intended to fuel the company’s wholesale and retail operations domestically and abroad.