UK Style by French Connection will launch this spring. 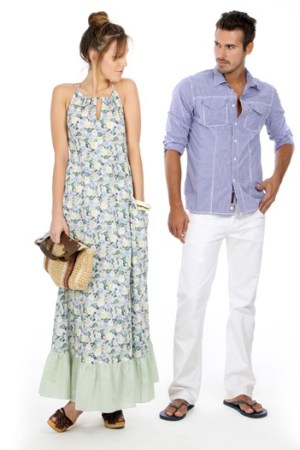 Sears Holdings Corp. will launch UK Style by French Connection this spring, in a daring collaboration between two brands from different continents with little in common other than striving to lift their underperforming businesses.

This story first appeared in the September 15, 2010 issue of WWD. Subscribe Today.

UK Style by French Connection will be sold exclusively at Sears stores starting in March for spring. It will offer contemporary clothing and accessories for women, men and children, and possibly eventually broaden into home goods and fragrance. The collection will be available on sears.com. LF USA’s Regatta division will source, develop and manufacture the collection.

“This is definitely a move signifying we are serious about apparel,” John Goodman, executive vice president of apparel and home for Sears Holdings, told WWD Tuesday.

He noted the plan represents an important part of Sears’ overall apparel strategy, which entails adding other labels, particularly in young men’s, juniors and tweens; improving the store experience with 200 stores recently upgraded with new fixtures, mannequins on platforms and fresh paint, and completing the new San Francisco buying office for the Sears and Kmart divisions last month by staffing it with 200 merchants involved in product design and development, shopping the markets and seeking brands.

“We really looked at what French Connection has represented for 40 years, and liked a lot of the styling and where the brand is headed,” Goodman said. “We thought it would be a good fit. We want to start gaining some consideration among young people.”

According to Stephen Marks, founder and chief executive officer of the London-based French Connection, initially, Sears will sell the label in the 200 stores that have been upgraded, and he projected a volume of $200 million to $300 million for UK Style by French Connection, based on that level of distribution. However, he stressed the plan is to roll out to at least 500 Sears stores and add more products, which means the line could generate far greater volume in the future. Goodman said ultimately, UK Style by French Connection will be a “head-to-toe” collection, with swimwear, footwear, sunglasses, jewelry and other accessories, along with items for the home, added over time.

French Connection, which has been losing money, will report financial results today, and also officially unveil the plans with Sears. Asked how his business in the U.S. is doing, Marks replied: “Very nicely,” and that, from the financial report, “You can expect to see an improvement.”

He said Sears approached him to create a line and at first he was skeptical, given Sears’ less-than-stellar reputation in the softer side of its business, while hard goods have been successful. “Then I met everybody and was incredibly impressed,” Marks said. “It’s a major experiment. I can see huge change at Sears. Mass market selling can be very successful if the product is very good. This could be a big lift and, I think, for the halo brand as well.”

“We are working to really identify brands to fill holes or opportunities” in the assortment, Goodman said. “Brands that, in our opinion, could be game changing.” While Sears’ all-American reputation seems at odds with French Connection, it’s a bit reminiscent of J.C. Penney’s collaborations with Bisou Bisou as well as the Spanish brand Mango.

Goodman was confident the French Connection strategy would not alienate existing customers. “In no way do we want to do that,” he said. Instead, he sees it bringing a better balance to the assortment, along with the more traditional and career lines at the chain, such as Apostrophe. It’s also consistent with Sears’ latest advertising campaign, “The Many Sides of Me.”

“We will continue to constantly look to new brands and partnerships through the spring season and into next year,” Goodman said.

A campaign encompassing print, broadcast and in-store signage — inspired by French Connection’s signature creative — will be part of the kickoff for UK Style by French Connection. Lloyd & Co, best known for working with Tom Ford and Gucci, has been retained by LF USA to develop the campaign. Previously, Sears worked with Regatta on its LL Cool J line, which ended this fall. Regatta also works on the Vera Wang collection at Kohl’s, and has worked with Wal-Mart on merchandise programs, as well.

Goodman also said getting more frequent deliveries is part of the strategy. He said new fashions will be injected into the UK Style by French Connection shops every six weeks or possibly faster.

Among the key styles will be tuxedo jackets, cropped floral leggings, striped tanks, animal prints, sequined tops and, on the men’s side, washed denims and oxford shirts — all looks for which French Connection has been known, although at Sears the prices will be much lower. The collection will have a balance of fashion, key items, bottoms and dresses, Goodman said. “It’s a comprehensive line.”

“All of the products will be priced to sell. We’re not playing the high-low game,” Goodman assured, citing a range of floral leggings and striped tanks from $10 to tuxedo jackets priced for $50 and denim jeans for about $27.

Marks described prices as being 25 percent below the regular French Connection line. There will be separate men’s and women’s shops, totalling 1,800 to 2,000 square feet, while children’s will be integrated in the children’s department. “The shops will look different from the rest of the store, but will tie in with some of our initiatives” to improve the store experience, Goodman said.

“French Connection is the pioneer of fast fashion and is an international leader in the contemporary category, with original, groundbreaking consumer marketing,” said Rick Darling, president of LF USA. “This is a powerful alliance.