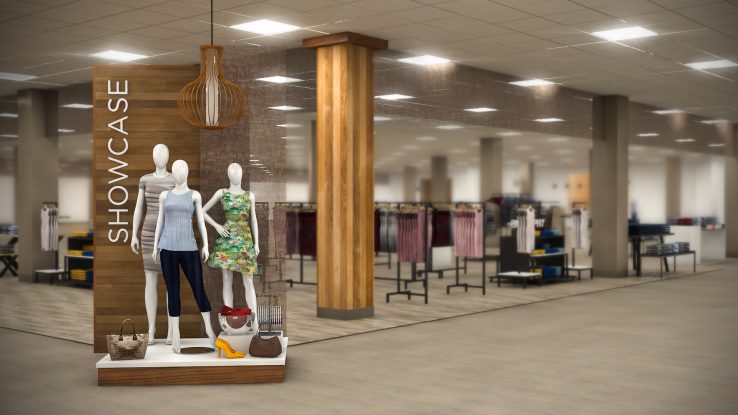 Sears is taking a bold step to shore up its apparel business and asserting that it’s still in the game — the retail game, that is.

Long criticized for using the Sears and Kmart store fleets for real estate plays rather than investing and building its core retail business, Edward S. Lampert, chairman and chief executive officer of Sears Holdings Corp., pledged at the annual meeting in May to “[try] as hard as we can to make it happen this year.”

Apparel is one of three key areas that Lampert has honed in on and the new Showcase at Sears concept launching this fall is being touted by the retailer as being a game-changer. The 10,000-square-foot to 15,000-square-foot shop-in-shops will offer more than 10 brands that are well-known in Europe and Latin America but less familiar in the U.S.

Some retail experts don’t believe Lampert’s assertions — the fact that he’s closed hundreds of Sears and Kmart units in the last two years doesn’t help, although the company has said the closures are tied to profitability and are helping the retailer become more competitive and nimble. For the first quarter ended April 30, the company reported net loss attributable to Sears Holdings’ shareholders of $471 million or $4.41 per share compared with a net loss of $303 million or $2.85 per share in the 2015 period. Sears Holdings plans to report second quarter on Thursday.

“We are creating an experience for our members unlike anything in the U.S. retail industry,” said David Pastrana, president of apparel at Sears Holdings, adding that Showcase at Sears will be “a fashion-forward collection featuring established and popular international brands. It will bring high energy and innovation. It’s affordable, but there’s a good fashion component. We haven’t seen anything like this at our competitors.”

Initially launching at five New York-area stores in the fall, Showcase will feature men’s and women’s apparel, shoes, intimates, accessories and children’s clothing. Styles will range from fast fashion and fitness to contemporary and tailored sportswear with prices from $10 to $175.

“If it’s a success, for sure we’ll try to grow it,” Pastrana said. “It’s very important for us to make this work.”

Pastrana said Sears mined data to learn what its customers wanted and to identify opportunities. “We also think we’ll attract a new customer,” he said.

The arrangement with brands — Sears has exclusivity, although Pastrana wouldn’t say for how long — is symbiotic. “These brands are leaders in their markets and are growing internationally in many markets,” he explained. “They want to be in the U.S. The idea was to bring these companies and have a showcase for these brands. We’re working very closely and exclusively partnering with them to make this happen. It will be a point of difference for us.”

Biography women’s fashion and Zatchels leather handbags available in a wide variety of colors and with nickel hardware, hail from the U.K. There will be two intimate apparel brands from Mexico — Illusions and Fiorentina — that will feature sexy lace-embellished bras and panties.

Mexico’s Lmental will represent casual men’s wear, while Hawes & Curtis of Jermyn Street in London, tailored suits, ties and shirts. Jeans for men will be covered by Denmark’s Jack & Jones, whose web site boasts wholesale accounts in more than 1,000 doors in Europe.

Pastrana emphasized that Showcase brands will be selling their main collections, not watered-down versions made for Sears. “They’re bringing the best of their assortments,” he said. “Mango is coming with a full line. In the past, Mango grew at a competitor [J.C. Penney] with MNG. Now, Mango will be well-represented.”

Children’s collection, 3Pommes, is unmistakably Gallic, from the Peter Pan collars and whimsical illustrations of Parisian scenes on dresses to petite bateau-striped T-shirts and rugby-style sweatshirts for boys. Brands with cosmetics and fragrances will sell them alongside core products.

Sears worked with SGN Group, which helps international brands establish a presence in the U.S. “These brands, each so successful internationally, were eager to launch in America and the Showcase at Sears is the perfect platform for them to do so,” said Sever Garcia, founder of SGN Group. “Sears is a trusted brand, woven into the fabric of American retail. When you combine the unique shopping experience they’re building, the exclusive access to an incredible mix of fashion all in one location, at very affordable prices, it’s a win-win-win for the participating brands, Sears and its members.”

Showcase at Sears shops will have a much more elevated look with photography and signage,” Pastrana said, adding, “The brands will have quite a bit of control in terms of retail execution, visual merchandising and product selection.”

Showcase, which will be staffed by dedicated and trained associates, could add brands if the concept takes off. “If there’s more interest, for sure we’ll evaluate that and think about how we take it to the next level,” Pastrana said.