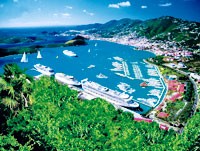 NEW YORK — Luxury brands will soon have a wider berth for expansion, if they think beyond malls and consider marinas.

Island Capital Group LLC, a New York-based real estate firm, plans to transform existing marinas and build new ones around the world that will encompass state-of-the-art docking for mega-yachts, smaller cruise ships and other craft, as well as upscale shopping, dining, hotel and recreational facilities. The intent is to create “lifestyle destinations” that draw the rich, the super rich, and the aspirational, from land or sea.

Phase one of Yacht Haven in St. Thomas will cost about $160 million and will have an 80,000-square-foot retail village, a new marina, 30,000 square feet of office space, 12 luxury condominiums and four restaurants, including one off a pier jutting into the harbor with a 360-degree view of the island and the water.

“St. Thomas is definitely the prototype,” said Andrew Farkas, chairman and chief executive of Island Capital. “It’s the first facility of its type to be developed anywhere and it’s intended to change the face of retailing in the Caribbean. This is our flagship property, and the one all of our others will be judged against. It’s very important to have a stellar property here.”

Farkas said that Island Capital has nine properties in the Caribbean and Middle East under its control, either owned, with options to acquire or develop, or managed by the company, and a total market capitalization in excess of $1 billion. “We expect to have more properties under our control over the next 12 to 18 months. We’re in various degrees of negotiations on 10 others.”

Added Elie Finegold, president of Yacht Haven, “We’re looking at doing projects throughout the Caribbean from St. Lucia through the Bahamas and, in the longer term,  Florida and Southeast U.S., the Northwest, Northeast, the Mediterranean and parts of the Persian Gulf. It’s a swath of geography that follows the primary migrating patterns of large yachts.”

Sheri Wilson-Gray, the former executive vice president and chief marketing officer of Saks Fifth Avenue, has joined Island Capital as executive vice president to direct the sales, leasing and marketing activities and shape the character of Yacht Haven’s various components. At Saks, she led marketing initiatives with several luxury brands. She said that at Yacht Haven in St. Thomas, stores are expected to be open in the first quarter of 2006, while the marina and some restaurants will be operating at the end of this year. The marinas will be built with finger piers up to 18 feet in length to accommodate mega-yachts, which are those over 80 feet in length.

Asked about the progress in leasing, Wilson-Gray said letters of intent are being negotiated. She declined to specify which brands could sign leases, but cited Origins, MAC, Sephora, Ralph Lauren, Louis Vuitton and Burberry as among those being looked at.

“There will also be a mix of local vendors that are not necessarily high ticket,” selling glassware, colorful ready-to-wear, swimsuits, pareos, sandals, straw bags, pottery and other objects that reflect the local cultures, as well as casualwear, jewelry, cosmetics, wine and spirits, home accessories,  and men’s wear. “When people travel, they like to shop, and they like to find things they can’t find at home,” she said.

The St. Thomas project has been under way for 2 1/2 years, since Island Capital purchased the property and took over the development process from the former Insignia Financial Group, which was founded by Farkas and sold off in 2003. Farkas is the son of Robin Farkas, who ran the former Alexander’s chain. Finegold was Insignia’s chief innovation officer, working on strategic initiatives. Andrew Cuomo is an executive at Island Capital, involved in public policy and real estate capital markets.

“We are creating an entirely new dynamic,” Farkas said. “The proximity of a large number of vessels gathered together creates an exciting environment, right on the water, with a spectacular skyline of yachts.”

According to figures provided by Island Capital, there are about 6,000 mega-yachts in the world, and about 650 are projected coming out of the shipyards each year for the next four years. St. Thomas draws two million cruise-ship visitors, each year and another 660,000 visitors by air. The island has the highest duty-free limits of any duty-free port in the world for U.S citizens, allowing $1,600. Most other ports have an $600 to $800 limits. On St. Thomas, the per capita spend is higher than other Caribbean venues, at north of $250, according to CB Richard Ellis.

“There is tremendous pent-up demand for high-level marina facilities. Most don’t have a retail experience that’s any fun,” Farkas said. “Marinas used to be about storage. Now they’re about hospitality and entertainment.”