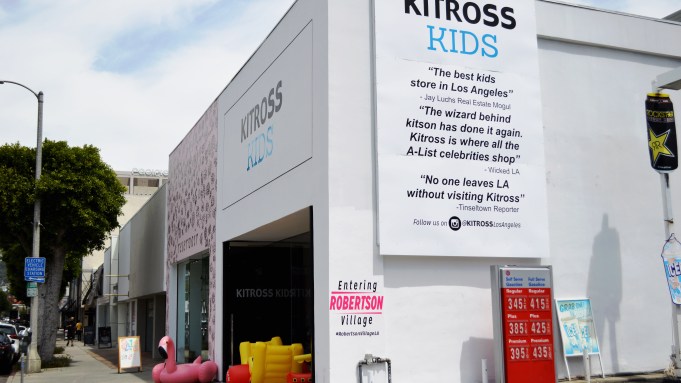 LOS ANGELES — Fraser Ross has quietly expanded with a new kids’ store in a move that gives the retailer an even larger footprint on Robertson Boulevard.

The founder of the Kitson chain of boutiques — an early Aughts celebrity haven and L.A. retail destination — about a year ago debuted his Kitross concept shop on the street. He’s now followed that up with a 2,500-square-foot children’s boutique across the street to anchor the somewhat sleepy portion of the thoroughfare that Ross and other tenants are looking to breathe new life into. Ross — now with 7,500 square feet total leased on Robertson Boulevard — is carrying out his signature flavor of retail: more is more, hot local brands and Los Angeles to the max.

He’s also mulling the possibility of partnering with another tenant on the street, home design boutique Nicole Sassaman, on a summer concept shop perhaps in the vein of a book or Los Angeles culture store. That would be joined by Blue Bottle Coffee, which is expected to open on the street in July, followed by restaurant The Henry in September.

The retailer erected Kitross Kids in 10 days, using fixtures left behind by former tenant Joseph along with flea market finds and vinyl signage.

“I could see how much I was selling of kids’ at the other store,” Ross said of the decision to open a children’s outpost. “It’s the business that will always be needed that’s not online. People always need birthday gifts and tourists come and they travel and they want to buy clothes.”

Moving the kids’ product to its own space has allowed for the original Kitross to expand its men’s and women’s offering. Whether Ross opens more Kitross stores remains to be seen.

“People are coming,” Ross said of the business. “Maybe I want to be a store now in L.A. that they come to like a Colette in Paris. You can only do so much to edit [the merchandise]. There’s so much product out there. A lot of the local designers need places to sell.”

The Kitross store is projected to close in on $7 million in sales this year and the hope is the kids’ business will do just as well. It’s already turned the heads of celebrities with Reese Witherspoon, David Beckham, Kelly Rowland, T.I. and Sarah Michelle Gellar among those who have shopped there.

Even with the early gains, there’s still uncertainty with the Kitson brand Ross founded in 2000 and whether the intellectual property ends up back in his hands. The company began store closing sales in late 2015, attributing the decision to high debt loads. Ross had already sold off his ownership stake and is alleging in two lawsuits the company was unfairly taken from him.

Last summer he sued the law firm Jeffer Mangels Butler & Mitchell LLP for conflict of interest in representing him and former Kitson chief executive officer Chris Lee simultaneously. The firm and Lee secured a $15 million loan via Salus Capital Partners, which did not have a license to lend in California, the complaint alleged, with the loan a contributing factor in Kitson’s demise. A separate lawsuit was later filed last year against Lee on similar complaints.

As the litigation plays out, Ross continues to focus on growing the Kitross brand as the world of retail rapidly changes.

“The consumer doesn’t want to go in stores anymore; they go online. They want lifestyle stores,” he said. “It’s what the consumer that travels wants now. Retail’s changed. You’ve got to have something to get them through the door unless you’re a high-end designer and there’s a wait list.”

Ross reiterated his continued focus on L.A.-centric product as his competitive advantage. The Beverly Hills Hotel’s palm print on apparel has done well and, when he can, he has vendors tweak certain product to make it Los Angeles-centric.

Part of his next steps are also weighing whether he’ll take the Kitross brand online and set up e-commerce like so many of his peers.

“Somebody said ‘Why don’t you have online?’ You know what? It’s kind of like a club,” he said of the brick-and-mortar store. “You have to come here now because you can’t see what I have online. It’s kind of a different format in retail. Maybe online is exposing too much. I don’t know what the future of retail’s going to be.”