Retailers, and landlords, in Britain are coming up with all sorts of ways to keep their spaces germ-free, crowd-free and easy to navigate. Their future depends upon it.

Waiting to get into the Louis Vuitton store in Chelsea.

LONDON — As if retail wasn’t already a tough business.

The easing of lockdown has forced retailers — and landlords — to figure out ways of luring people into stores and ensuring that they have a pleasant experience, spend money and don’t spread, or catch, any germs.

From controlling the crowds and enforcing social distancing to forcing free hand gel on one and all, they’re all trying to earn shoppers’ trust — and delight them — all at once, while facing the hard reality that many remain skittish about leaving their homes, and spending money on nonessentials.

Hugh Seaborn, chief executive officer of Cadogan, the historic, family-run property company that oversees 90 acres of retail and residential space in Chelsea and Knightsbridge, described Monday’s surge in sales as “a release spend,” and said there was very little browsing  going on.

“I didn’t see anyone leaving a shop without a bag,” he said. 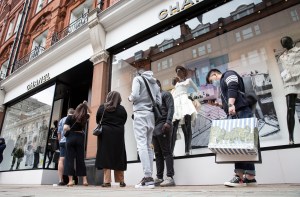 Lining up outside Chanel in Chelsea on June 15, when London retailers reopened.  Matt Alexander

He added that people were lining up to shop at Chanel, Louis Vuitton and Zara, but he’s not taking that enthusiasm for granted. “We have to see whether it’s sustainable, and how comfortable and safe customers feel going forward.”

He said in the run-up to the reopenings, Cadogan worked hard with retailers on devising one-way systems for shops, reorganizing circulation in the Duke of York Square, an open-air shopping area off the King’s Road, and identifying areas of frequent use that will be regularly deep-cleaned.

It advised on how to limit the numbers of people in-store at any one time, on amended trading hours, curb-side collections and click-and-collect.

Likewise, Selfridges has spent the past 12 weeks gearing up to reopening day with myriad new measures in place.

According to the group’s stores director, Maeve Wall, “it’s proven harder to reopen than to close, and we’ve worked hard to make sure the store comes back to life.”

In addition to the usual hygiene and social distancing measures, Selfridges plans to steam and quarantine for 72 hours all clothing that’s been tried on in-store or returned to the store. It is sanitizing its changing rooms after each use and — like its competitor Harrods — blasting out regular messages over the Tannoy system about the measures to stay safe.

Charmingly, it has also spray-painted big yellow dots on some of the escalator steps to show customers how far they need to stay away from each other when traveling between floors. On the beauty floors,  customers can look at products but they cannot touch them. Instead, sales assistants will have to demonstrate and test products on themselves. 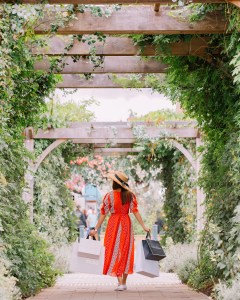 An image from Bicester Village.  Photo Courtesy of Value Retail

People can try on sunglasses, but only with a staff member present, and once glasses have been worn, they’re cleaned immediately.

Even with those measures “we realize not everyone is going to venture in, so we’ve also set up virtual appointments” for beauty, fashion and other services, Wall said.

Tailors and men’s wear retailers on Savile Row and in the St. James’s are making similar moves. The Savile Row tailor Richard Anderson said his shop will be open by appointment only at first.

“Initially it will be myself and one team member in-store, with team members returning in July and August once we are back up and running and confident in the new processes to ensure the safety of our staff and clients.”

Anderson has also installed screens on the tailors’ cutting boards and front desks as a further safety measure and will ask all staff to wear masks and gloves.

Freddie Briance, ceo of New & Lingwood, said a maximum of nine people, including staff, can be in the store at one time. Clothing that’s been tried on will be quarantined, while hand sanitizer, gloves and face coverings will be offered to all customers who do not have their own.

Nearby, on Regent Street, Belstaff is offering personal shopping appointments in-store outside of opening hours, or during the day, as well as deliveries and returns to clients’ homes. 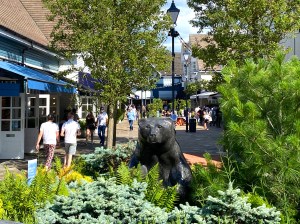 “For those who may not be ready to visit our stores yet, we’ve launched a new, virtual personal shopping appointment service, which will include after-care advice. We want to make it easy for people, so our message is clear: if you can’t come to us, we’ll come to you,” said Belstaff’s ceo Helen Wright.

Value Retail, which opened Bicester Village in Oxfordshire, England, and Kildare Village in Ireland on Monday, was able to draw from months of experience reopening its other outlets in China and Europe.

According to Scott Malkin, founder and chairman of Value Retail, which owns Bicester and its sister villages, shopping has changed so drastically that cash is no longer of much use and crowds are way too risky.

To wit, the villages offer as many digital payment solutions as possible, and have been pioneering the use of technology that eliminates the need for lining up outside stores.

“As far as we know, we are the first shopping venue in the world that has got a ban on physical queueing. For safety reasons, there can be no queue anywhere in our villages. Queues mean that people breathe on one another and block the flow of other people who are trying to get through, so now we do it digitally,” he said.

All of Value Retail’s villages now allow customers to scan a QR code, tap in their cellphone numbers and receive a text when it’s their turn to shop.

Malkin said all queuing “paraphernalia” — such as velvet ropes and barriers — are banned, and “we have our teams asking people to keep moving. You can either walk straight into that Gucci store or the store says, ‘Sorry, we’re fully occupied, but please just scan the QR code and then you’ll get a text inviting you to come back.'”

He said Value Retail has been trialing the system in its Continental European villages, and it’s been working. Malkin argues that guests don’t mind in what order they shop the stores, as long as they get the chance to shop in a store that’s not crowded.

The sales performance of Value Retail’s European villages has exceeded expectations, he said, with some trading at the same sales density as the same time last year.