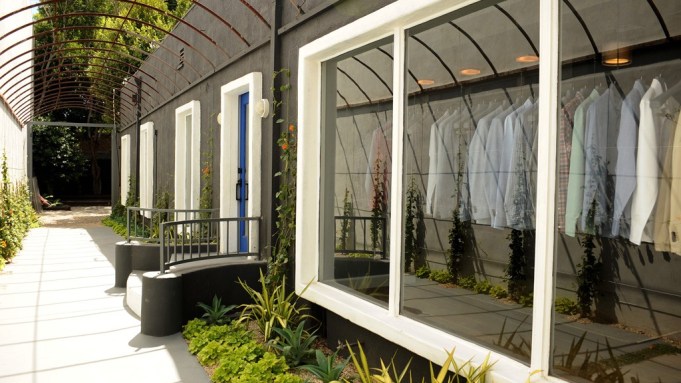 The 15-year-old brand, known for its custom suits, will open its second store, and first on the West Coast, on Sept. 3 at 8618 Melrose Avenue in West Hollywood. The 1,100-square-foot store comes two years after Seize sur Vingt set up an in-store shop at Ron Herman to test the Los Angeles market.

“We’ve had this New York, modern, tailored, downtown vibe. We want to incorporate L.A., and we feel it already does that. We’ve grown this way over time,” said James Jurney, who founded Seize sur Vingt with his wife Gwendolyn Jurney. “Lightweight construction is our background. It is the southern Italian way, and that works for L.A.”

About 40 percent of Seize sur Vingt’s business is custom clothing, and in the Melrose store, that business has found a home in a private lounge area tucked into the north side of the space. “We basically got into custom in ’98 because a lot of our clients would come in trying on shirts and the sleeves were too short. We started it based on a need,” he explained. At the beginning, the custom work was handled in the U.S., but today Seize sur Vingt has relationships with family-owned and -operated workshops in Italy, Portugal and England.

Seize sur Vingt is introducing a 3-D video camera at the West Coast store to film fittings that it will then send to tailors in Italy. Typically, it takes three fittings for each custom suit. With the videos, Jurney explained, “The tailors in Italy get to see much more information beyond measurements. Curves are a big part of making a custom suit.”

Seize sur Vingt favors clean and masculine designs for its stores. Seating is essential in the Melrose store to make customers feel comfortable and encourage them to linger as they ponder purchases. Gray is the space’s dominant hue, and materials include hardwood, custom-coated laminate, powder-coated steel and wool for rugs and wall coverings. “We try not to bring too much color into the space because we want to clothes to bring the color,” said Gwendolyn Jurney.

The Jurneys would consider opening Seize sur Vingt stores in other major markets, and the strategy of a pilot run in those markets with in-store shops at premier local retailers appeals to them. “We’ve done some work in Chicago, which is a good market, but quieter than L.A., and we’d be interested in going abroad. We do see ourselves having four to five stores in the future,” said James Jurney.

Seize sur Vingt originated out of a store on Elizabeth Street in NoLIta, but moved in 2009 to Greene Street in SoHo. In total, the Jurneys estimate the company generates roughly $3 million in annual revenues. At the Melrose Avenue store, their goal is to reach $1 million in yearly sales. Custom-made two-piece suits are primarily priced from $2,700 to $3,500, ready-to-wear suits are $960 to $2,700 and casual shirts are $210 to $260.