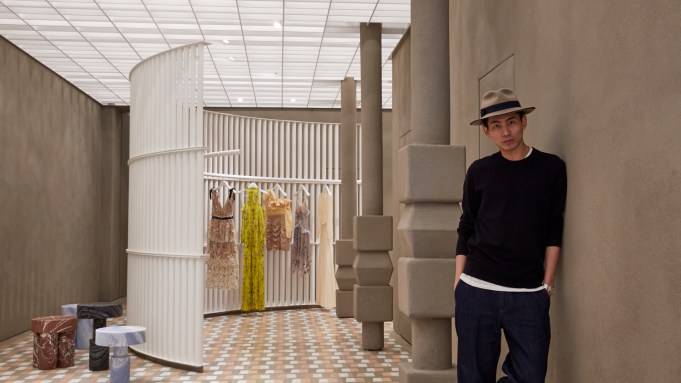 LONDON — Self-Portrait is preparing to lay down roots in London with its first flagship set to open on Albemarle Street in Mayfair later this month.

Han Chong, the London-based, Malaysian-born designer behind the contemporary label that’s known for its guipure lace dresses and hand-cut embroidery, will open the flagship on March 22 as part of a larger retail strategy.

“I wanted to open the first store in London because I am a London brand. The reason I chose Albemarle Street is because I like that energy around the area. It’s not so pretentious. It has that luxury feel, but it’s a bit edgier,” said Chong, who founded the label in 2013.

The designer said inclusivity was a key factor when he was thinking about the store. “I like to make people feel good,” said Chong. “I don’t come from a wealthy background, so when I was a student I didn’t have the money to buy expensive fashion brands. When I went to these stores I would admire the whole experience, but I couldn’t buy anything because I couldn’t afford it. So I want to create a place that has the whole luxury feel with the luxury experience, but the pieces are probably, like, 300 pounds.”

Located at 49 Albermarle Street, near Alexander Wang, Malone Souliers and Thom Browne, the 2,507-square-foot store space spans two floors. It was designed by Casper Mueller Kneer Architects, who have worked with the likes of White Cube and Céline in the past. The store features terrazzo flooring with pink and white marble insets, while geometric installations such as two semicircular screens are set on the ground level.

Casper Mueller Kneer and the artist Michael Elmgreen created the bespoke furnishings. The store will also have dedicated spaces for tailoring services and styling appointments and offer a 90-minute door-to-door delivery service within London.

It will stock the label’s ready-to-wear line as well as shoes and accessories. Store exclusives will include rtw pieces that use spring fabrics, but in new silhouettes, such as an off-the-shoulder frill top, a satin polka-dot top and a yellow printed tiered minidress. Prices range from 120 pounds for knitwear to 420 pounds for a guipure lace dress.

Chong said he’s expecting the store to generate 2 million pounds this year. Since starting the business four years ago, the designer said the U.K. generates about 30 percent of overall sales, 30 percent from America with the rest coming from Asia, Middle East, Italy and Northern Europe.

Bestsellers include Self-Portrait’s lace occasion dresses, although Chong also noted that knitwear is performing well. He has recently added outerwear, shoes and accessories to the mix.

Chong said over the next three to five years, he would like to open about eight to 10 stores internationally, with the next one in the U.S., followed by one in Asia.

The designer also hinted at a number of fashion and accessories collaborations in the works. “I love doing accessories because it can add a different dimension to the look,” said Chong. “I am very interested in art, so there is always a reference from that, and then how to make it fashion. We haven’t tapped into accessories that much. We only did shoes and sunglasses. I wanted to make sure everything I do I put 100 percent into. I want to do it right.”

While he couldn’t share too many details, he said there is a collaboration with other brands in a category that he has not yet explored. He said the pricing will be affordable. “That is always my starting point on everything because I want to cater to everybody,” said Chong of his strategy. “That is the goal.”