LONDON — Selfridges has supersized its windows and let the sun shine onto the shop floor in the newest stretch of its accessories hall, which is set to be unveiled officially on Wednesday.

The 17,760-square-foot space, phase two of a plan to build the world’s largest accessories hall by 2018, is all about the windows, which stretch from floor to ceiling and run along Duke Street and around the corner to Oxford Street.

The 20-foot-high windows are so high that shoppers can see the sky and the hubbub on Oxford Street as they browse the Dior and Louis Vuitton spaces or dip into the luxury accessories bazaar at the center of the room. Even on the darkest of days, a warm, flattering artificial light fills the new hall.

That central area offers a mix of handbags, jewelry and other gift items, including dramatic shirt cuffs by Catherine Osti and Byredo candles and fragrances, and the aim is to get people lingering — and feeling so comfortable they have to shop.

At the Selfridges Corner Shop, a concept space, customers can walk straight up to the windows and look onto the street, although they’ll have to beware of knocking into the rotating Santa Claus float, part of the store’s “With Love From…” Christmas window display.

“The boundaries are blurring between the street, the windows and the retail space,” said Sebastian Manes, buying and merchandising director, during a walk-through ahead of the opening. “We’ve never had windows like this before, and it’s so much brighter. You can see the sky — and you can walk in the windows.”

Manes said Duke Street is also being re-paved and refurbished, so by next year the accessories hall will feel like it’s spilling onto the street.

Manes said Selfridges’ ambitions are big for the hall: “We didn’t want a corporate approach with just one shop after another. We wanted a revolution. The conversation started five years ago, and it was about how we get people to shop in a different way.”

The space, with its white terrazzo floors, classical columns and warm lighting, is part of a three-phase accessories hall project set to be completed in the late spring of 2018.

Once finished, the accessories hall will span 60,000 square feet, and make up one-third of Selfridges’ ground floor, and one-tenth of the 600,000-square-foot Oxford Street flagship.

Last year, Selfridges tugged open the curtain on phase one of the David Chipperfield-designed space, which houses brands including Loewe, Chanel, Stella McCartney and Gucci. 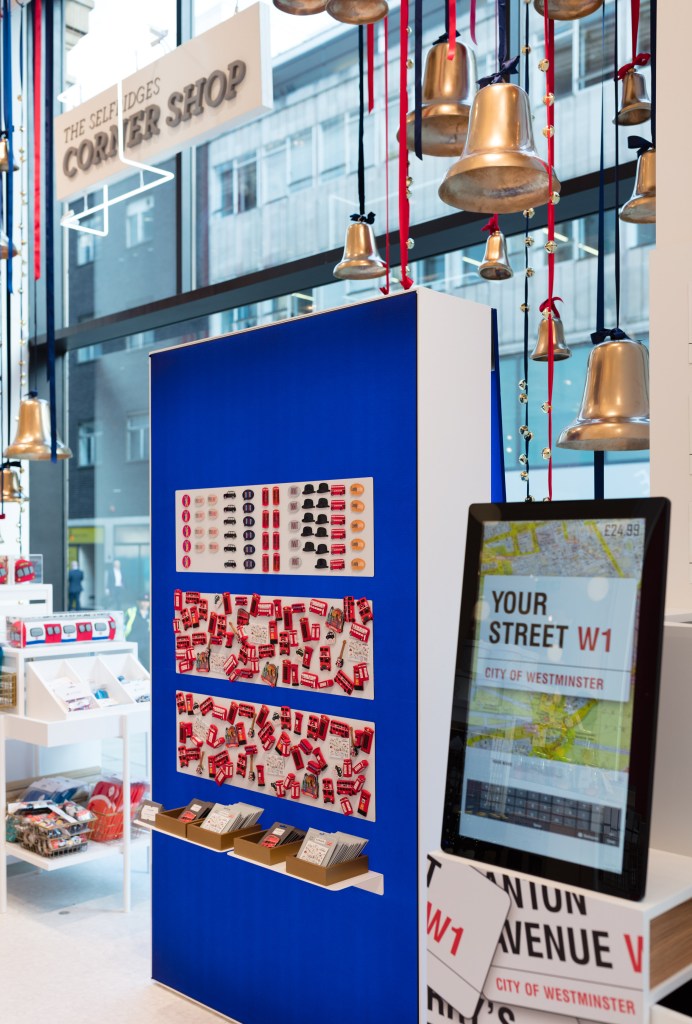 As reported, the overall project is costing more than 300 million pounds, and involves the overhaul of the eastern end of the store, uniting three buildings from different eras.

Selfridges expects luxury accessories sales to increase by more than 50 percent between 2014, when the project was announced, and next year, when it’s set to be finished. The top five brands, which it declined to name, are forecast to deliver sales worth more than 100 million pounds a year.

It’s already on a roll: As reported, the store saw sales surge 16 percent in fiscal 2016-17 to 1.6 billion pounds, boosted by the first phase of the expanding accessories hall and by selfridges.com, which the retailer said exceeded expectations in the year ended Jan. 28, 2017.

Operating profit in the period climbed 18 percent to 180 million pounds year-over-year, and the retailer said more than 200 million pounds of additional sales were generated in 2016-17 from the e-commerce site and from refurbished spaces at the Birmingham and Manchester stores.

Phase two of the Oxford Street flagship accessories hall is anchored by a Louis Vuitton concept space that will change every three months, and a bright white Dior shop-in-shop — no macaroon pinks here.

The new Vuitton space is decked in the vibrant colors and patterns of Masters, the collaboration with Jeff Koons that riffs on paintings by artists such as Monet, Gauguin, J.M.W. Turner and Manet. Manes said exclusive products in keeping with the Masters theme are on the way.

The Dior space, meanwhile, is meant to be open and welcoming, with few walls dividing it from the main shop floor. An exclusive Dior capsule is set to arrive on Wednesday.

The center of the room is more like a bazaar, with a thought-provoking mix of accessories, including bags by designers and brands as different as Roksanda, Thom Browne, Valextra, The Row and Launer, Queen Elizabeth II’s handbag brand of choice.

A “clutch edit” features designs by Eddie Borgo and Nathalie Trad, and the plan is to shake up that mix regularly to keep shoppers on their toes.

Nearby, there’s a display of Byredo bags (Selfridges is the exclusive U.K. stockist) and an array of the brand’s best-selling fragrances and candles. Catherine Osti fabric and cuffs sit on one glass case, while earrings by Paula Mendoza and Percossi Papi sparkle from another.

“The focus is on gifting — we didn’t want this space to be just about handbags,” said Manes.

The Selfridges Corner Shop is located at the front of the room. It’s modeled on the humblest of London neighborhood retailers that sell everything from bananas to lottery tickets, newspapers and Cadbury bars.

The Selfridges version is, of course, more swanky, with a London tourist twist and more than 450 products ranging in price from 2 pounds to 7,000 pounds. There’s a lineup of squishy Paddington Bears and a station where customers can create bespoke London street signs for 25 pounds. Hand-iced Biscuiteer cookies jostle alongside stickers and velvet pencils with gold crowns on top.

Designers including Mary Katrantzou, Erdem and Anya Hindmarch have designed dish towels for 20 pounds, while the first Selfridges Monopoly game is on display. It’s a retailer’s dream with product categories such as men’s designer fashion, kids’ shoes and fine jewelry instead of real estate, and a portrait of the founder Gordon Selfridge on the cash.

“It’s not a question of price but of putting great things together,” said Manes, who had brands including Bella Freud and Chinti and Parker make limited-edition knits and Chloé, Alexander McQueen, Mulberry and Jimmy Choo whip up bags with a British theme. Felt expert Lucy Sparrow created a Christmas hamper from felt that costs 3,600 pounds and fabric sushi rolls for 75 pounds.

This isn’t the first time that Selfridges has experimented with the corner shop idea: In October, the store set up a New York City-style bodega with A$AP Rocky that sold everything from T-shirts to Krispy Kremes.

On Jan. 7, the concept space will change to reflect the store’s 2018 takeover, “Radical Luxury.” Over the course of five months next year, Selfridges will explore the “concentration and dilution” of luxury and also at its “uniqueness, ephemerality and transformative nature,” and answer questions about where luxury is going, what it means and whether or not it’s a material thing.

The latest space is also offering a personalization, stamping and painting station for accessories and will see the opening a branch of Buly, the Parisian apothecary, which will sell cream, candles, soap and fragrance.

In the spring, the store will make room for the London branch of a flower shop the Selfridges team discovered in Tokyo.