Although "It" bags that sell for thousands of dollars may build buzz about accessories, two London department stores are spotlighting some often-overlooked... 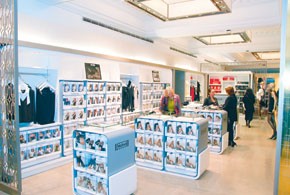 LONDON — Although “It” bags that sell for thousands of dollars may build buzz about accessories, two London department stores are spotlighting some often-overlooked categories in the sector.

Selfridges last month unveiled an accessories hall that carries bags, scarves and belts from brands such as Marc by Marc Jacobs, Juicy Couture, Michael by Michael Kors and Diesel. Prices start at about 45 pounds, or $92, for a Guess clutch bag.

“We thought that it wasn’t right to have only expensive bags [in the store],” said Sebastian Manes, deputy head of accessories at Selfridges. “We believe that nobody does the aspirational market really well, and we wanted to give an opportunity to our customers and really own that market.”

While prices in Selfridges’ main accessories hall can run as high as the $16,000 range for a Balenciaga crocodile skin “worker” bag, prices in the new accessories area range from $92 to 3,000 pounds, or $6,100, for a limited edition watch by Toy Watch. Average prices run from about 100 pounds, or $205, for a DKNY fabric bag to 300 pounds, or $620, for a Lamb canvas monogrammed bag.

“I think [the area] could appeal to a younger customer or someone who just wants a gorgeous Marc by Marc Jacobs jeweled clutch which, at 299 pounds [$617], is quite affordable for that designer,” Manes said.

Harrods is banking on the enduring appeal of accessories, too. Last week, the Knightsbridge store opened a revamped soft accessories department that specializes in hosiery by brands such as Wolford, Tabio and Falke, and scarves from Alexander McQueen, Fendi and Pucci. The area also offers pill-box hats by the Austrian milliner Muehlbauer and frilled umbrellas by Chantal Thomass. The 4,300-square-foot department is on the ground floor and is accessed from the Hans Road entrance.

“[Other stores] have tended to make their soft accessories areas smaller, but we have kept a very wide range [of products] in our room,” said Sue Shields, soft accessories buyer at Harrods. “The footfall is so high here and, with the trend for dresses, we’re experiencing an increase in the demand for hosiery, which began last autumn.”

Although both stores’ departments may not focus on investment purchases, they still have a luxurious feel. Selfridges’ 3,500-square-foot area, which has been redesigned with white-lacquered and gold-edged fittings and huge, tiered Art Deco chandeliers, sits near its main accessories hall on the ground floor, in the former fine jewelry area. The room’s windows have also been opened, so the space overlooks Oxford Street.

Similarly, Harrods’ department has taken a crochet pattern from a pair of tights, which has then been reproduced as a weaving, Art Nouveau-style gold print that is repeated on the walls and floors of the gold and cream room. Shields said the area was designed to fit in with Harrods’ reputation for “classic luxury.”

Selfridges and Harrods both will carry limited edition pieces in their new areas. At Selfridges, several brands have made exclusive pieces for the room: Diesel’s pewter leather Torelli bag will sell alongside a jeweled leather bowling bag by Marc by Marc Jacobs. There are also three in-store shops, for Marc by Marc Jacobs, Juicy Couture and Michael by Michael Kors, and the space will carry scarves and belts from labels such as Alexander McQueen, Yves Saint Laurent and Dries Van Noten.

“For our customer, we’re about something different and exclusive,” said Shields at Harrods, who added that for spring the store would introduce scarves by Nina Ricci and Vionnet to the area.

“Customers can walk through ladies’ accessories and discover the room, and I think that’s nice,” Manes added.