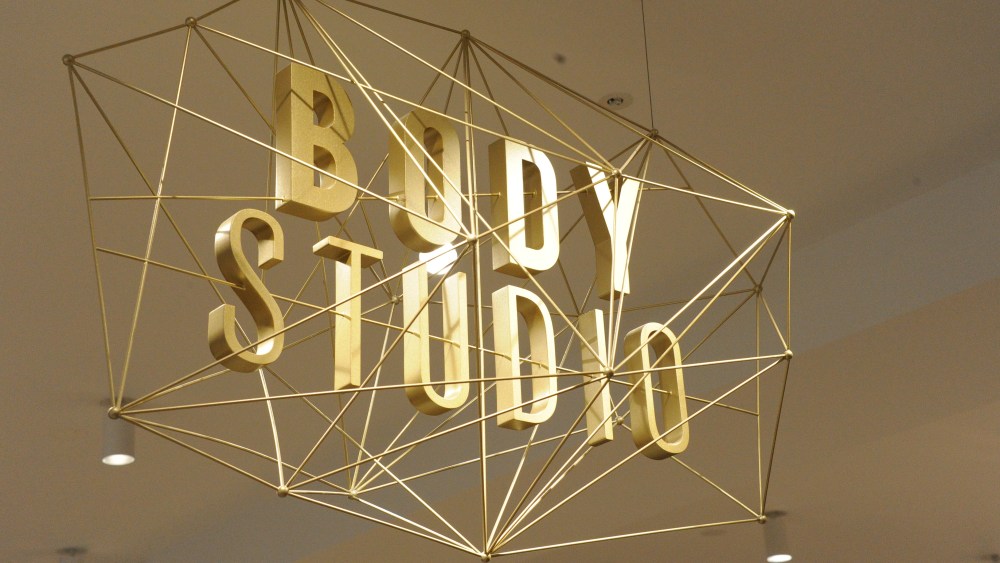 LONDON — Selfridges is changing shape with the unveiling of the Body Studio, a 37,000-square-foot space dedicated to women of various sizes and figures – and with more than clothing on offer.

The store’s largest-ever department, which opens today, is all about off-duty dressing and will stock lingerie, swimwear, pajamas and high-performance sports gear. It will also have a café courtesy of Hemsley and Hemsley, sister chefs who push organic greens and proteins and a Daniel Galvin hair salon with 28 stations, two beauty rooms and a private VIP area.

This is the first major unveiling in Selfridges’ 300 million pounds, or $428 million, five-year redevelopment project that was revealed two years ago.

The department is on Selfridges’ Floor Three, located above the Shoe Galleries and connected to them by an escalator. Skylights and picture windows overlooking an interior garden are part of the design intended to help assuage shoppers’ anxieties about dressing.

It was created by the Shanghai-based architects Neri and Hu, whose past projects include Lane Crawford’s Lab and London’s Pollen Street Social restaurant.

The opening dovetails with the theme of this year’s big in-store campaign, EveryBody, a program of events proclaiming the “beauty and strength” of the female form. Talks are planned around the themes of wellness, spirituality and beauty, with guest speakers including Deepak Chopra, Susie Orbach and the Royal Ballet dancer Lauren Cuthbertson. There will also be spin classes run by Psycle and Yung Club yoga sessions in the store’s Ultralounge, on the lower ground floor.

The EveryBody ad campaign features images shot by Norbert Schoerner of nonprofessional models representing a range of body types. Wayne McGregor, the British choreographer and director, has posed the models in the images and planned a series of impromptu dance performances that will take place inside the store during the campaign’s run from April 11 to early June.

EveryBody chimes with Selfridges’ self-reflective, often philosophical campaigns of years past, including The Beauty Project in 2014 and Agender last year.

This year, the store has also commissioned a short film, directed by Katherine Ferguson and choreographed by McGregor, that examines the relationship women have with bodywear. The film will appear online as part of the store’s efforts to transfer the new department’s spirit and product offer to e-commerce.

Anne Pitcher, Selfridges’ managing director, said in an interview the Body Studio is a statement space.

“Department stores tend to hide their lingerie spaces in the back left-hand corner, out of the way. It’s not celebrated. We set out to create a really great experience. We want to empower our customers to feel better, or really positive, about their bodies. Whatever or whoever you are, not only are you welcome, but we look forward to offering you a really complete experience both within store and online. The two play together really well.”

Pitcher said it was crucial the new space be unique to Selfridges, rather than a series of adjacent leased departments owned and operated by individual brands.

“Department stores need to be more than shopping malls. This is pretty much a Selfridges-owned experience, and a celebration of our bodies. It’s very conceptual. The emphasis on brand is played down, and it’s all about category and service. It’s a luxury experience, and within that experience we have a broader width of prices, styles and products.”

Indeed, Agent Provocateur and La Perla are the only big brands that have shop-in-shops on the floor.

Most of the space has been divided into distinct areas, including activewear, hosiery, loungewear, lingerie and swimwear. There are more than 130 brands on offer, in a range of prices and sizes.

Exclusives will include Three Graces nightwear; For Love and Lemons; Fleur du Mal, and Adina Reay lingerie, and the Australian activewear brand The Upside. The space will also feature a pick-and-mix “knicker bar” that aims to sell 33,000 pairs of underpants in the first year.

There’s the “Fit Studio,” where customers can book appointments for bra and lingerie fittings, with services that include bridal, post-baby and post-surgery. Worlds away from the traditional Marks and Spencer approach, consultants will do all bra fittings by eye – and without a tape measure. Changing rooms have flattering lighting and three-way, total vision mirrors.

The Body Studio, housed in former management offices, is accessible from several points within the store — the Shoe Galleries, the third-floor contemporary space, and the parking lot. “You can park your car and spend your whole day here,” Pitcher said.

Selfridges’ decision to dedicate so much square footage to next-to-the-skin clothing categories was no whim.

The store is tapping into the thriving trends for innerwear as outerwear; ath-leisure, mindfulness and wellness, and casual over formal dressing.

The move is also a way of putting lingerie in a new context: Since the Victoria’s Secret flagship landed on New Bond Street in September 2012, it’s been soaking up market share in central London, with security guards hired to control crowds on the weekends and some tourists treating it as a must-see in London, along with Big Ben and Buckingham Palace.

The bodywear category overall is on a growth trajectory: According to Selfridges, continued innovation in the sector, underwear as outerwear, and the “cultural phenomenon” sparked by the “Fifty Shades of Grey” series have been spurring sales in underwear and related categories.

Selfridges said that since 2009, nightwear has grown 300 percent into 2 million pound, or $2.9 million, business for the store, with 74 percent growth expected this year. According to a Morgan Stanley report published last year, the overall athletic market worldwide is due to grow more than 30 percent by 2020.

Following the opening of the Body Studio, Selfridges said it expects its overall bodywear offer to grow more than 60 percent by 2018. Pitcher declined to give any specific sales projections for the space.

The 106-year-old store isn’t the only big London name that’s thinking about the body.

Later this month, the Victoria and Albert Museum will unveil “Undressed: A Brief History of Underwear,” which looks at intimate dress from practical, sensual, technology and fashion perspectives.

Ivy Park, a 200-piece collection of fashion-led activewear, and the fruit of Beyoncé’s joint venture with Sir Philip Green, will land in stores on April 14 and aims to dress a broad spectrum of women at high-street prices.

Asked what will happen when the ath-leisure craze dies down — there were already signs on the fall runways that designers are taking a more romantic turn, working texture and embellishment into their more tailored and formal collections — Pitcher believes the Body Studio will endure.

“What we set out to do is to create an established destination, a permanent space for customers to enjoy finding the right solution for their bodies — and that isn’t dependent upon ath-leisure. It’s a great destination, and we offer a great service. And we do think that a future where we are interested in our health and inner selves is here to stay,” she said.

The store’s five-year refurbishment project will include an expanded London accessories hall on the ground floor. The hall will eventually double in size to 54,000 square feet. In addition to handbags, it will offer eyewear, small leather goods and brands ranging from the big luxury names to smaller labels. The first phase of the hall will be finished in October, and the space will stock designer luxury accessories brands.

Pitcher said the store will be creating “something unique” in the accessories space, “not least of which will be the architecture, which will be quite extraordinary.”

The space, including an entrance to Selfridges on Duke Street, is being designed by David Chipperfield with work in the entire five-year program set to be completed by the start of 2018.