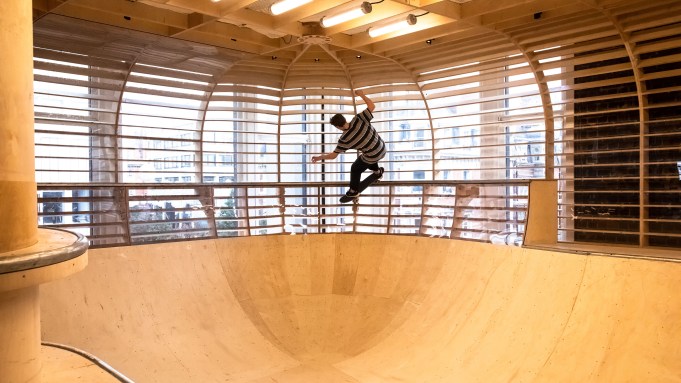 LONDON — At 109 years and counting, Selfridges has learned much about how men like to shop: Most want things all in one place, they don’t want to hang around browsing, and it’s likely they’d rather be doing something else — anything else.

The store has tried to answer those needs — or, at least some of them — with a new men’s wear concept known as The Designer Street Room, an 18,000-square-foot space that’s twisting a few retail rules.

In one corner, there’s a 1,022-square-foot skate bowl overlooking Oxford Street and the rooftops of Mayfair; in another, there’s a sound wall with a DJ-ready space. A big neon Kenzo sign lights up the back wall, while a custom-built Land Rover Defender has been parked in between clothing racks that carry a high-low mix of brands including Gucci, Versace, Kenzo, A-Cold-Wall, Off-White, Schott, Ambush and Billionaire Boys Club.

Near the sound wall is the Men’s Beauty Workshop, which offers up names ranging from Byredo to Electric Inc. to MAC, with products organized by category rather than by brand, similar to the buzzy men’s grooming shop Beast in Covent Garden. The first Acqua di Parma “Barbiere,” or barber, concept outside Italy will open in the space in mid-December.

The crowd on opening day said much about the democratic nature of this new Selfridges space: There were skaters showing off their moves in the sun-splashed wooden bowl, surly teens on holiday from school testing out the baseball caps, and fashion lovers laden with logo bags flipping through the streetwise clothes and logo shoppers in the Gucci space.

Bosse Myhr, Selfridges’ director of men’s wear and technology buying and merchandising, said there are multiple ideas at work on the shop floor, and one of the aims is to take the starch out of the retail experience.

“It’s designed like an art gallery, where the brands are the artists,” he said during a walk-through. “We wanted to keep it alive and keep it flexible rather than having static boutiques.”

Myhr said the shop floor is operating on a 52-week calendar, which means that no brand is shackled to its space for very long — and Selfridges can keep moving brands in, out and around. He added that some of the street brand founders are also working as musicians or DJs. They don’t think in seasons, so why should they adhere to the fashion calendar?

“Being flexible means we’re able to give brands space when they have product or when it’s relevant for them to be here,” he said.

T-shirt and hoodie brand Chinatown Market is in the room with an exclusive Original Penguin partnership and when that goes, a Nike recycling program from London-based Studio Alch will take its place. Down the road, expect limited-edition sneakers from Fear of God.

Myhr added that the mix of megabrands such as Gucci and niche London labels like A-Cold-Wall reflect the way people cross-shop today. It’s also the first time the store has grouped such diverse brands in one space.

“Luxury today is not defined by price, but by access to products and exclusivity,” he said, adding that the new space is offering a worldwide exclusive on T-shirts by Blondey McCoy, the British artist, designer, skateboarder and model.

That move made sense on a number of levels: Selfridges said it sold 80 percent more men’s T-shirts in the first half of 2018 compared with the same period last year. The new space also has a dedicated T-shirt destination housing more than 30 brands, with a focus on cult and hard-to-find products.

Before creating the space, the store said it polled its customers about how they wanted to shop, and aimed to make the experience as consumer-centric as possible. There’s a genderless approach to merchandising, hence the YSL nail polishes in the grooming area, product replenishment driven by just-in-time stock drops rather than seasons, and a lineup of customer activities and events planned for the space. “If somebody turns up and wants to DJ, they can do that, too,” Myhr said.

The Land Rover Defender, with its bright yellow soft-top and retro-style seats, is a prop that will live permanently in the space and be used as a location for brand customization, art projects and product launches.

The space itself, designed with Jamie Fobert Architects, exalts big windows overlooking Oxford and Duke Streets, with columns and soaring ceilings from the original Selfridges 1909 building. Graphic and airy aluminum frames divide the various spaces while the decor is also a mix of high and low, with chunky white marble tables and Astroturf-style greenery in some of the brand areas.

The space carries 88 labels — most of which are indie — and 40 are new to the store, including ReadyMade from Japan; Warren Lotas, Facetasm and Ader Error. British names include Ryan Hawaii, Places + Faces, Hey Reilly, Studio Alch, Assid, Saint London, GEO, Corella Lnd, Horn Please, Val Kristopher and Bowl Cut. A rare and collectable dead stock and vintage selection from Not/Applicable is also on the floor.

Selfridges also plans to introduce @theyellowdrop to let customers know when new and exclusive launches will be dropping.

In a few weeks’ time, the space will link to Selfridges’ new restaurant, Brasserie of Light, which is set to open in November. The restaurant will complete the transformation of the ground floor accessories hall, a 300 million pounds, multiyear investment.

The restaurant will be operated by Caprice Holdings, the group behind restaurants including The Ivy, Sexy Fish, Scott’s and Le Caprice. Designed by Martin Brudnizki, the eatery will display London’s largest-scale artwork by Damien Hirst, a 24-foot crystal encrusted sculpture of Pegasus.

Once all of the hoardings around The Designer Street Room come down, the space will also flow into denim, accessories, shoes and contemporary areas, which are all housed on the 100,000-square-foot men’s wear floor.