Major Asian expansion in the works 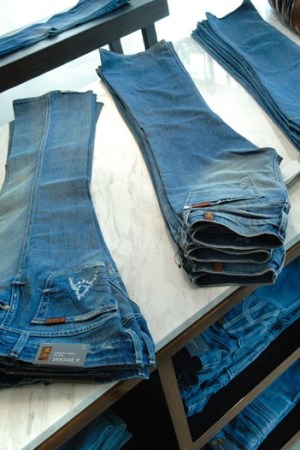 TOKYO — Seven For All Mankind’s Asian expansion plans took another step forward last week with the opening of a 5,000-square-foot flagship here.

The store replaced a Nicole Miller boutique located in the trendy shopping district of Daikanyama, a hilly neighborhood brimming with small shops and cafes. The brand’s first freestanding store in Japan, it stocks Seven’s full range of women’s and men’s denim, sportswear and accessories.

“Japan is the number-one market in Asia. It’s a critical market for us to be in,” said Seven president Topher Gaylord. “We believe now, in this period, there is an incredible opportunity for strong brands…to build upon their position,” despite the recession.

The Tokyo opening is just one component of the eight-year-old label’s Asian expansion plan. Working with a series of local partners, the VF Corp.-owned Seven is opening 30 to 35 stores in Asia this year in locales such as Hong Kong, Taiwan, Shanghai, Beijing, Singapore and Kuala Lumpur, Malaysia.

“Asia is going to be our fastest-growing region of the world for Seven For All Mankind in 2009,” Gaylord said, adding the brand expects to post high-double-digit sales growth there this year.

Giuliano Sartori, VF Asia vice president and general manager for contemporary brands, noted Seven’s untapped potential in increasingly affluent markets like the Philippines. The brand feted its first store in Manila earlier this month and Sartori saw many women wearing Seven jeans they purchased in places such as Los Angeles and Hong Kong.

“Ultimately, I think a lot of people subscribe to this aesthetic,” Sartori said.

As for the Tokyo store, Gaylord called it the “ultimate showcase” for the brand. The unit was designed to have an open, airy feel with a glass facade, mortar finish floors and polished zebrano displays.

Seven has built up a wholesale business in Japan over the past five years, but the focus is shifting to retail. Last year, VF set up its own Japanese subsidiary and formed a partnership with Global Retail Inc. to achieve its goals. This year, Seven will open two more freestanding stores in Japan, as well as five to 10 in-store shops, bringing the points of sale in the country to more than 50.