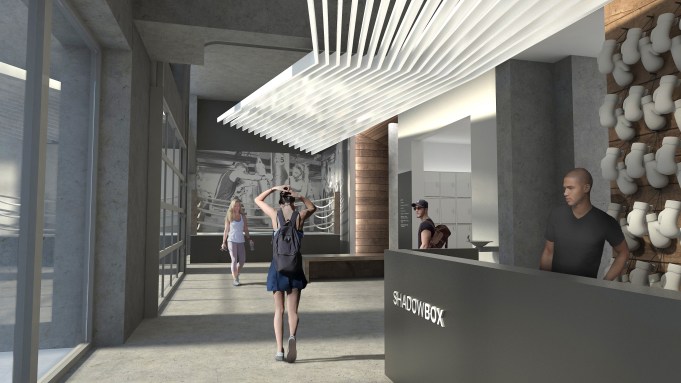 Shadowbox, the upscale boxing gym that has made waves among celebrities and the fashion set, is poised to take over prime real estate in downtown Los Angeles when it enters the West Coast market at the end of the year.

The boxing gym that has turned heads by creating a near spa-like environment — with C.O. Bigelow bath products in the locker rooms and vanities, among other residential touches — attracts a broad swath of devotees at its two studios in New York. It now will try its hand in downtown Los Angeles when it absorbs about 4,000 square feet of space at the Row DTLA mixed-use project. Its space sits at the front of the project, greeting visitors exiting the 4,000-space parking structure — some might say the crown jewel of the project in an area starved for easy access parking.

The facility, which will see a number of pop-up rooftop events planned for the fall in the lead-up to the opening by year-end, will feature Shadowbox’s signature vintage boxing ring for private training, along with a modular space that can be split into two studios.

“Fitness has gone from a bit of a small, tight-knit group of clients to very much on par with food and beverage and it’s become larger than just the thing that sits in the corner of a [retail] complex,” said Shadowbox founder Daniel Glazer.

Health and wellness is now at the forefront for many landlords looking to reposition properties, or in the case of the Row, fill out a unique roster of tenants. The aim with the Row is to revitalize some 30 acres of space in downtown L.A. that’s expected to bring 100 stores, 15 restaurants and about one million square feet of office space upon completion.

Glazer is just as thoughtful and measured about the Row’s leasing strategy in how he thinks about Shadowbox’s own growth.

“This is somewhat of a loaded question, although a very important one because our brand will hopefully always continue to have a big focus on community, and this idea that the people that come to class are the same people you see often and you start to know them by their names and their faces,” he said. “What we’ve been able to do so far is not grow so fast that we become, for lack of a better word, a chain and we go to these places deliberately, [the Row] being a very deliberate part of a bigger mission here in downtown’s growth.”

Shadowbox debuted in New York’s Flatiron district in May 2015, expanding to Brooklyn’s DUMBO at the end of 2016. Going to the Row is very much in line with how the company thinks about real estate, Glazer said.

“I would say we stay away from the traditional mall partly because you just become one in a long line of brands and we care deeply about the brand and the overall identity of the brand,” he said. “That’s the number-one criteria of how we source real estate.”

Starting out in the Flatiron was a means of proving that the concept could work by going into what Glazer called the Mecca for fitness. Brooklyn was an urban renewal story with boxing history, Glazer went on to explain, and downtown Los Angeles is similar in the project’s aim to breathe new life and create a new nerve center for the neighborhood.

“So when you go to a mall, if there’s no reason, no narrative, no deeper meaning behind that mall, it’s just a place for retail and four walls, it’s really hard to get excited about that,” Glazer said. “Now obviously more and more of that space is becoming available with the market’s readjustment, but we’re really focused on major urban areas for the foreseeable future.”

The company is next eying spaces in Lower Manhattan, with a studio expected to open there as early as the fourth quarter. Glazer also pointed out that there’s plenty of opportunity to be had in the Los Angeles market, with the most natural next step to go to the west side to a place such as Santa Monica or Venice.

“We’re lucky to have good timing in that; of all the most desirable uses for landlords, fitness is at the top,” Glazer said. “It’s experiential. It’s retail and there’s a shortage of premium brands, relative to soft apparel or food and beverage.”

For More on the Row DTLA in WWD:

Unexpected is the Rule at Platform L.A., the Row DTLA