NEW YORK — The last time Shanghai Tang made headlines in New York, they were of the wrong kind. 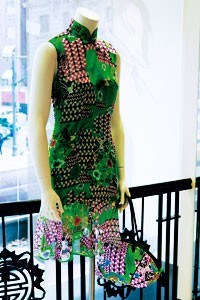 NEW YORK — The last time Shanghai Tang made headlines in New York, they were of the wrong kind.

It was in July 1999, when its high-profile, 12,500-square-foot flagship on Madison Avenue and 61st Street closed only 19 months after it had opened, a victim of high rents, its own hype and fashion miscues.

But the company appears to have learned its lessons. Today, a reinvented Shanghai Tang, which occupies a smaller space at 714 Madison Avenue near 63rd Street, is poised for expansion with the help of its deep-pocketed parent, Compagnie Financière Richemont SA.

Raphaël le Masne de Chermont, executive chairman of Tang Department Stores Limited, has spent the last three years quietly transforming the company into a lifestyle brand. Gone are the kitschy items such as Mao watches and T-shirts with a likeness of the late Communist leader. The prerevolutionary and Cultural Revolution styles are now updated for the 21st century. There’s a made-to-measure business where customers can create their own wedding gowns and evening gowns for $1,500 to $5,000. The price depends upon the fabric choices, which include hand-brocaded silk, lace and beaded fabrics, which cost $40 to $80 a yard. The most popular bridal gown style is the traditional cheongsam with custom-made buttons.

De Chermont plans to take the store count to 30 from the current 17 in the next two years. Next week, he will preside over the opening of a store in Jakarta, Indonesia. With three stores in China and five in Hong Kong, the company is clearly focused on Asia, where its name is well known. In September, Shanghai Tang will open flagships in Beijing and the Ginza in Tokyo.

There also is a push into Europe, with a flagship scheduled to open in Milan in spring 2006. Two in-store shops are opening as well, in Zurich’s Globus department store in the fall and Galeries Lafayette in Paris in spring 2006.

In the U.S., de Chermont has singled out a handful of cities — Los Angeles, San Francisco, Miami, Chicago and Las Vegas — as suitable locations for Shanghai Tang stores. “We don’t want to be overexposed,” he said. “The shopping experience is unique.”

De Chermont uses his friend, Ralph Toledano, chairman and chief executive officer of Chloé, as a sounding board. “He has been helping me a lot,” said de Chermont, who maintained that Shanghai Tang makes money. (Chloé also is part of Richemont.)

“My job was to turn the company to profitability,” he said. “The last two years have been profitable. The first rule of working for Richemont is, ‘It’s forbidden not to make money.’”

De Chermont declined to discuss volume for the company or specific stores. However, sources said the 6,000-square-foot New York store does $5 million in annual revenue.

According to luxury analysts, Richemont is clearly preoccupied with growing its successful watch and jewelry businesses. “They’re focussing less on textiles and apparel and enhancing the stores and improving the margins for Cartier,” said Bear Stearns’ Dana Telsey.

De Chermont, the former managing director of the Asia Pacific division for Richemont brands Piaget, Baume & Mercier and Panerai, is thinking along the same lines. “We will do watches next year in a serious way,” he said.

Shanghai Tang’s jewelry range, which is made by Sandra d’Auriol, a French designer based in Hong Kong, is being expanded and de Chermont wants to get the company into licensed products such as eyewear and fragrance.

Shanghai Tang’s updated approach to fashion is most evident in its collaborations with designers such as Philip Treacy, who made hats of brightly striped fabric and fur for winter. Treacy is working on another collection for spring. A collaboration between Shanghai Tang and Studd by Gabby Harris yielded a line of T-shirts embellished with sequins, beads and embroidery for spring, and there’s a collection of Puma shoes coming in May.

De Chermont hopes all this, along with the new stores, will raise awareness of the brand.

“I see this as a strong lifestyle brand,” he said. “It’s sort of a Chinese Ralph Lauren.”